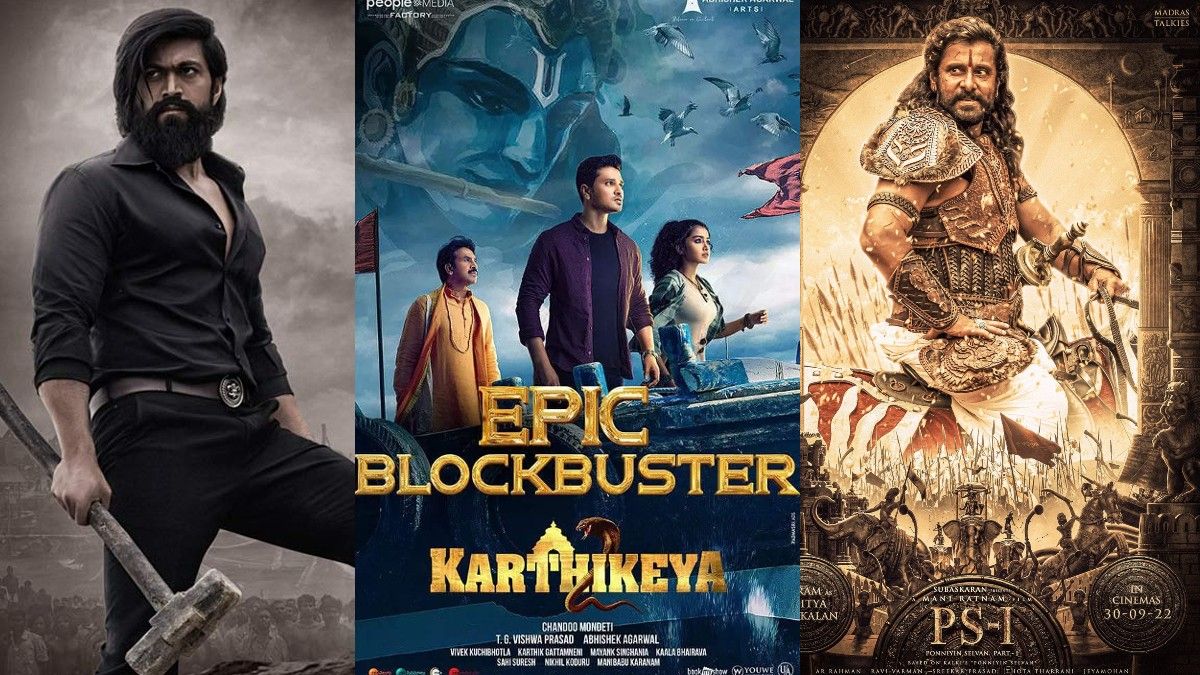 It’s the year that the South Indian film industries left other film industries including Bollywood far behind. While RRR and KGF 2 became the face of Indian cinema abroad and crossed over Rs 1,000 crore globally, Rishab Shetty’s Kantara and Mani Ratnam’s Ponniyin Selvan-1 became domestic success stories. The Kannada film industry witnessed a substantial boost with Kantara and KGF 2 and Tamil hits like Kamal Haasan’s Vikram became some of the highest-grossing blockbusters of the region. These South Indian movies are now streaming on OTT platforms, such as Netflix, Prime Video, Disney Plus Hotstar, and more, in multiple languages, including Hindi.

Check out our list of the best South Indian movies in Hindi and other languages on OTT released in 2022:

SS Rajamouli’s RRR, featuring Ram Charan, Jr NTR, is a grand historical epic that swept the box office and crossed Rs 1,000 crore globally. The film chronicles the brotherhood between two rebels in pre-Independence India and how they find their own way to destroy the British regime. The South Indian movie’s song Naatu Naatu has also been shortlisted in Oscar’s Best Original Song Category.

RRR is streaming on Netflix and Amazon Prime

A sequel to the Kannada blockbuster in 2018, KGF continues the story of Rocky (Yash), who after establishing himself as the kingpin of the Kolar Gold Fields, has to maintain his supremacy over adversaries and government officials, while coming to terms with his past. Directed by Prashanth Neel, the film was made on a budget of Rs 100 crore and earned Rs 1,200–1,250 crore globally from the box office.

Written and directed by Rishab Shetty, Kantara sees Shetty as a Kambala champion, who is at loggerheads with an upright forest officer. The film was a huge commercial success and became the second-highest-grossing Kannada film of 2022.

Kantara is streaming on Amazon Prime.

Mani Ratnam’s historical drama, starring Vikram, Karthi, Aishwarya Rai Bachchan, Jayam Ravi and Trisha, follows the internal conflicts within the Chola Kingdom in the 9th Century BC. Based on the works of the poet Kalki, the Tamil film crossed over Rs 500 crore at the box office globally.

An action-thriller film directed by Lokesh Kanagaraj, the film features Kamal Haasan, Fahadh Faasil and Vijay Sethupathi in the lead roles with a special cameo appearance by Suriya. The story follows a black ops squad led by agent Vikram, who aims to bring down a drug syndicate group.

Vikram is streaming on Disney Plus Hotstar.

After being cheated by the woman he loves, a finance agent arrives in India from the USA to retrieve money from her father, a powerful industrialist. Directed by Parasuram, the film features Mahesh Babu and Keerthy Suresh as leads.

Directed by H. Vinoth, an action-thriller Valimai stars Ajith Kumar, Karthikeya and Huma Qureshi and focuses on a man named Arjun, a police officer assigned to track down a group of outlaw bikers after their involvement in crimes. Will he succeed? Watch the Valimai online to find out.

Valimai is streaming on Zee5.

Directed by Saagar K Chandra, Bheemla Nayak is a remake of the 2020 Malayalam film Ayyappanum Koshiyum. The film features Pawan Kalyan and Rana Daggubatti. Bheemla Nayak follows the battle between a sturdy police officer and a retired havildar.

The film is streaming on Hotstar.

A sequel to the 2014 mystical thriller, the film follows the story of Doctor Karthikeya, who is hunting for the lost anklet of Lord Krishna. The film stars Nikhil Siddhartha, Anupama Parameswaran and Anupam Kher among others. The South Indian movie has done quite well in theatres.

Karthikeya 2 is streaming on Zee5.

List of top South films of 2022,  IMDB rating and platform