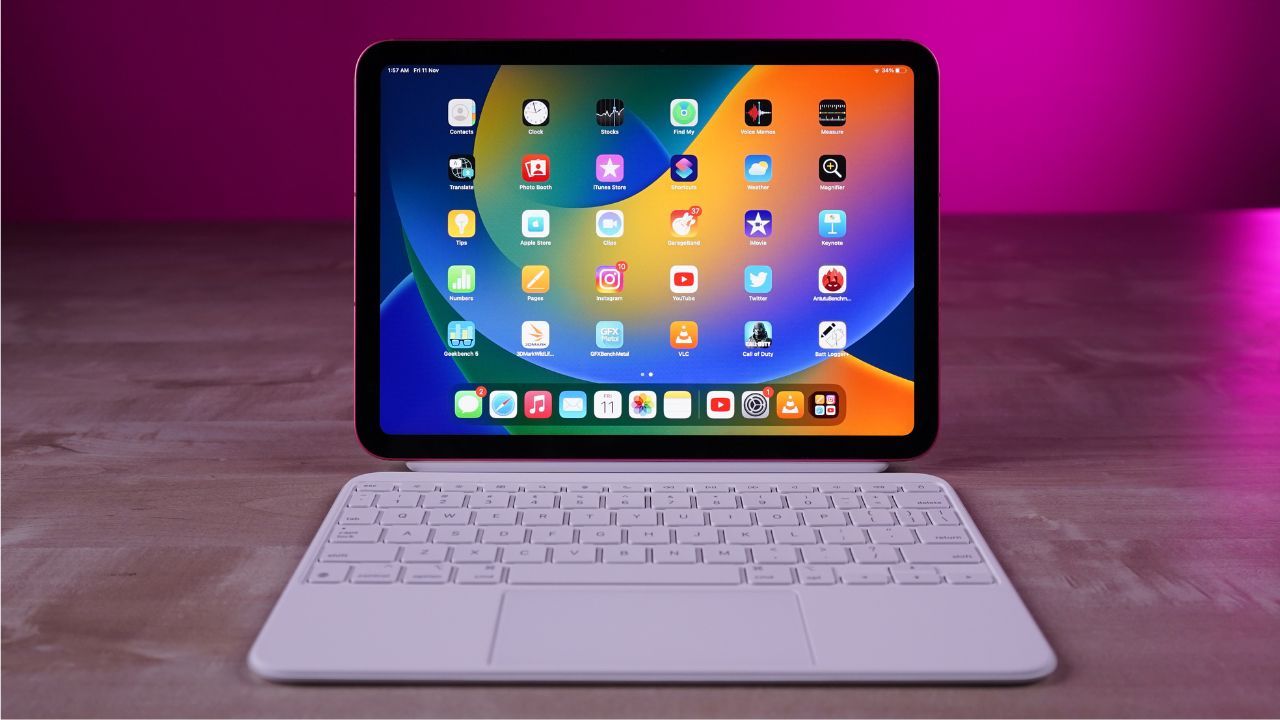 It’s finally here! The new 10th-generation Apple iPad was launched last month, finally bringing the entry-level iPad in line with other iPad models in terms of how it looks. The new Apple iPad also comes with a new chip, and the front camera is now placed in landscape orientation, the first iPad to have this feature. The 10th gen Apple iPad also gets the USB type-C port, making the complete iPad lineup type-C compatible now. The new iPad is a very useful product to have around and is completely capable of handling all your work and entertainment tasks, despite not having a premium display or demonstrating the true might of iPadOS 16. However, there are a few things here and there that we wished Apple included with the latest entry-level iPad.

Talking about the design first, the iPad gets the much-awaited full-screen, with even bezels on all sides, bringing the entry-level iPad’s design in line with the whole range that also includes the iPad Pro, iPad Air, and the iPad Mini. While the bezels may feel thicker than the iPad Air and iPad Pro models, this gets rid of the longstanding Home button, giving the iPad a more premium and streamlined look as compared to the previous generation. The Touch ID has also moved to the power button, which is placed on top of the iPad’s frame.

The new iPad is also super lightweight, weighing just 481 grams in total. Now, although this is heavier than the iPad Air’s 461 grams weight, it still feels super light and users can easily hold this iPad for hours on end, mainly due to the even weight distribution. In your backpack, the tablet feels almost weightless and you won’t even notice if it’s there after a point. The size is nice and compact and it can easily fit in the smallest of backpacks.

Another important design change on the new iPad is the placement of the front camera. The front camera on the 10th-gen iPad is now placed in a landscape orientation, making it easier for video calls or FaceTime. The 10th-generation iPad is the only iPad in Apple’s lineup to come with this design element. However, if you’re holding your iPad vertically while scrolling through social media and want to quickly post a selfie, there’s a little bit of adjustment involved. 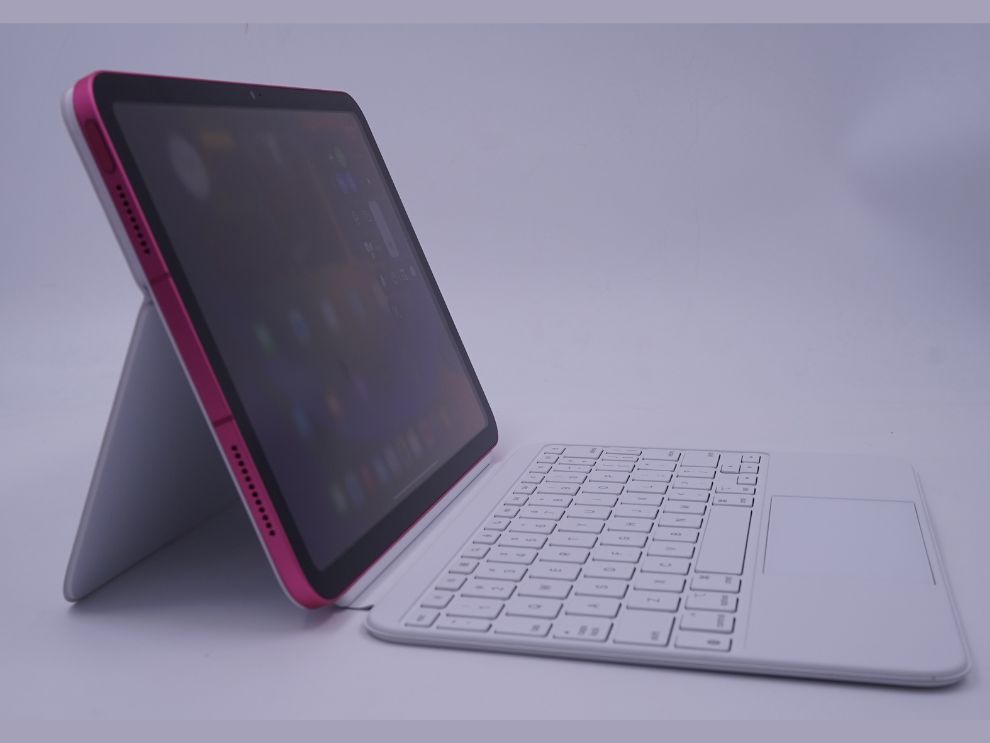 Apart from this, the presence of a USB type-C port is also an important design element in this year’s iPad. With this, all Apple iPad models now have a type-C charging port, a trend we also expect to spill over to the iPhone and AirPods next year.

The 10th generation Apple iPad uses a 10.9-inch Liquid Retina display with a 2360 x 1640-pixel resolution at 264 pixels per inch (PPI) pixel density. The display comes with 500 nits of peak brightness, which is enough for using the iPad in all kinds of environments. I used the 10th-generation iPad under the bright sun a couple of times and was able to see everything in good detail. An AMOLED display would have been better, but this is good enough and gets the job done pretty nicely. 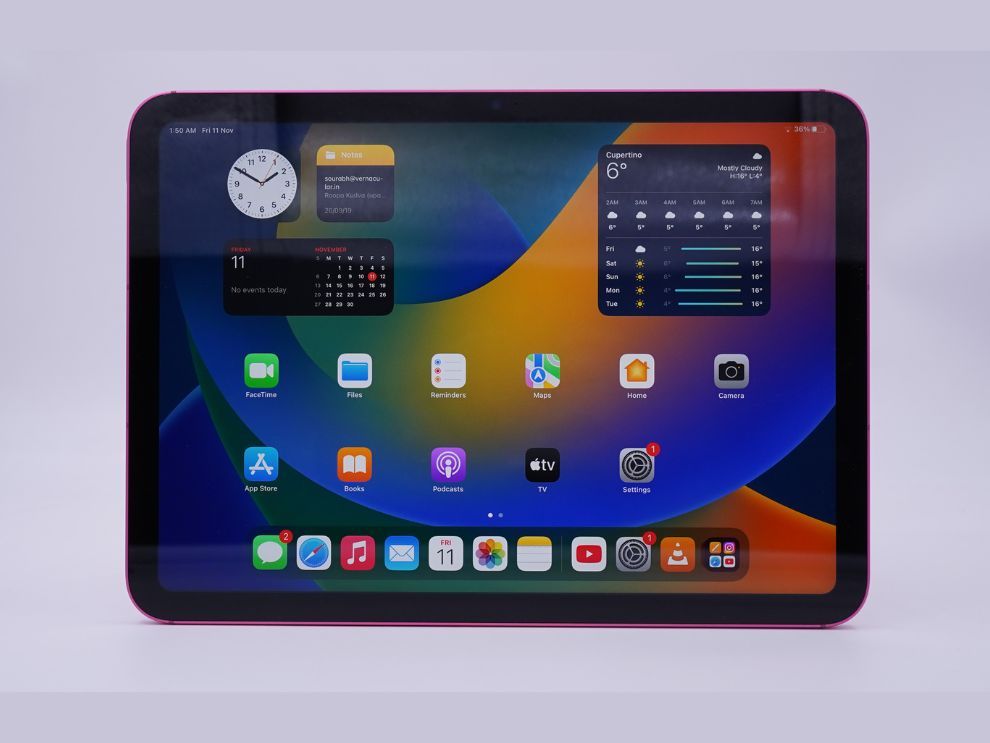 Being an entry-level iPad, this 10th generation doesn’t have a ProMotion display with a high refresh rate, but we never expected that. While the refresh rate is on the lower side, the touch response on the iPad is pretty great and the screen did not feel slow or laggy. Of course, I was using a 90Hz smartphone at the time, so it didn’t match up to that level of responsiveness, but it never felt slow. Even with the Apple Pencil, the display felt super-smooth and responsive. The latency is minimal, providing for a smooth writing or drawing experience. The pressure sensitivity also works similarly to other iPad models, but this model only supports the first-gen Apple pencil. The 10th gen iPad also misses out on HDR so you won’t be able to enjoy HDR content on Netflix, but the video quality is still pretty good.

Performance figures or how the 10th generation Apple iPad performs in different conditions is important since the iPad is used by many people as their work or study machine, which means that it should be able to handle multitasking like a champ, if not as well as its elder siblings, the iPad Pro and iPad Air. 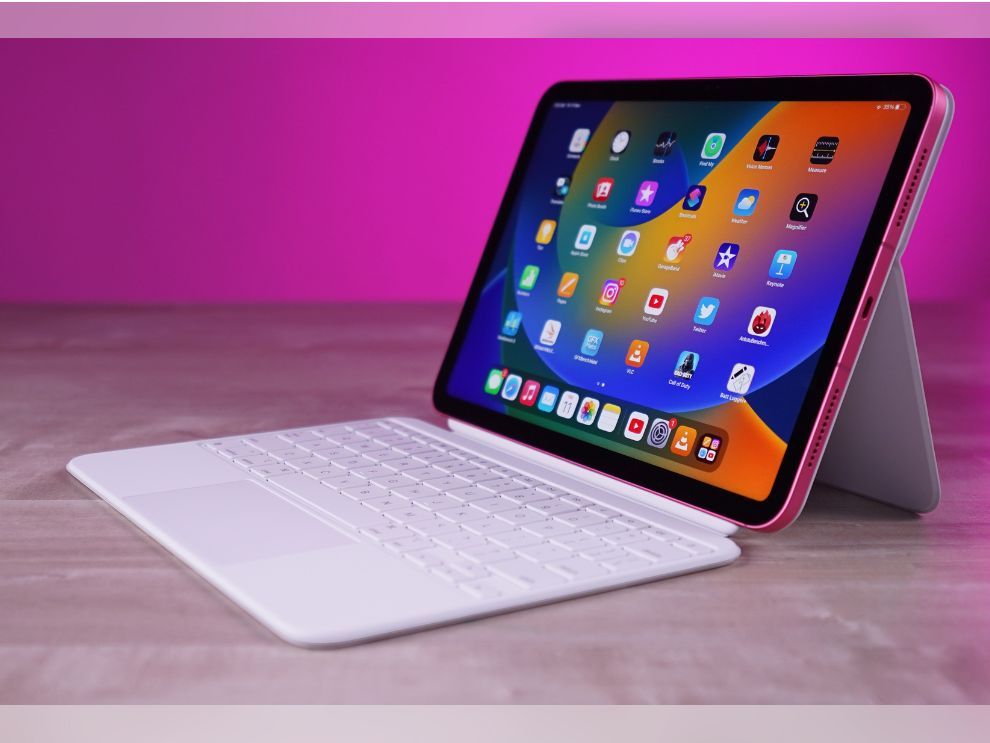 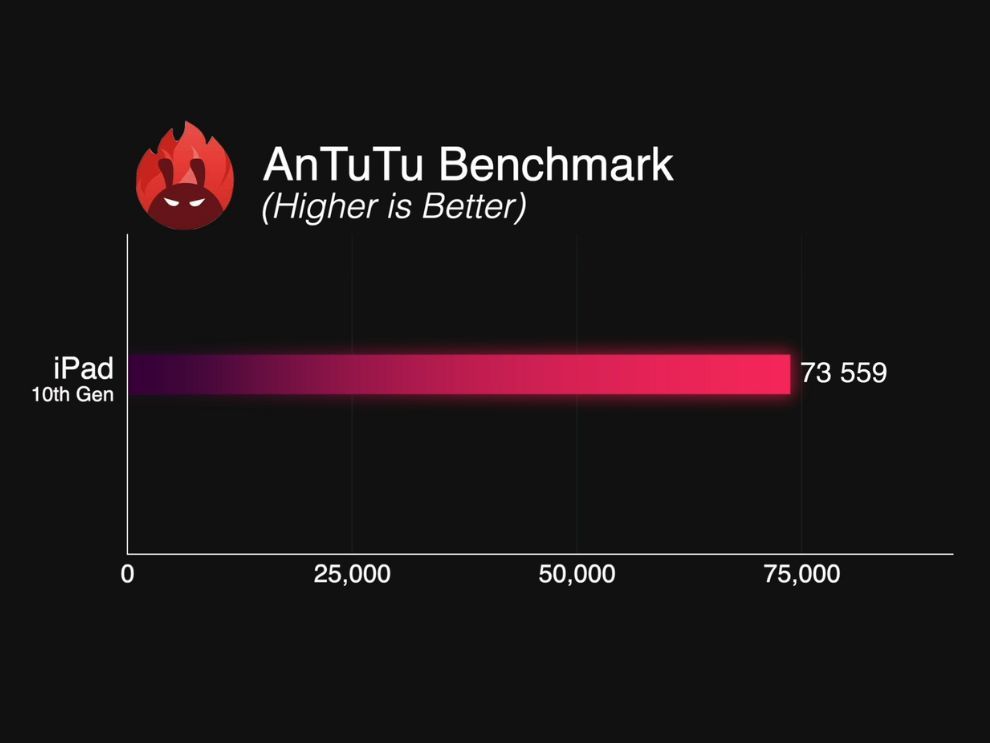 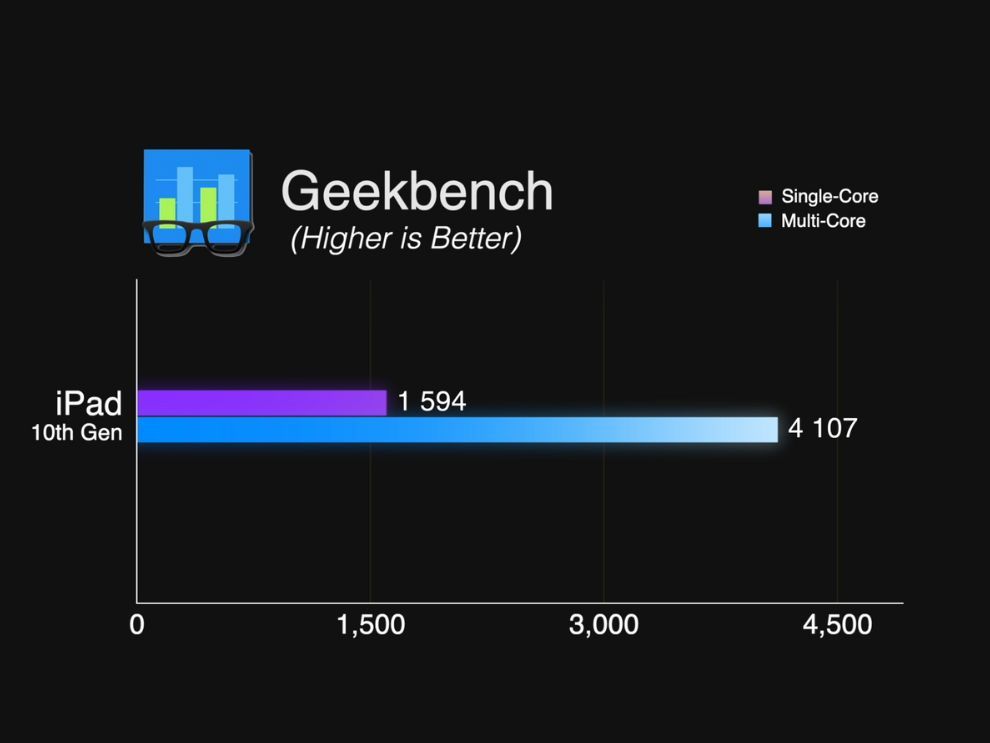 In comparison, the Apple iPad falls short as compared to rivals in the Android space. For example, the Samsung Galaxy Tab S8+, in our review, showed an AnTuTu score of 832,299, which is significantly higher than the 10th gen iPad’s score. However, as compared to Xiaomi’s popular Xiaomi Pad 5, the 10th generation iPad was able to put out higher benchmark scores. The Xiaomi Pad 5 scored 592,985 in the AnTuTu benchmark test. On Geekbench, the Xiaomi Pad 5 put out a single-core score of 664 and a multi-core score of 2,644, which is significantly lower than the iPad’s numbers on Geekbench. 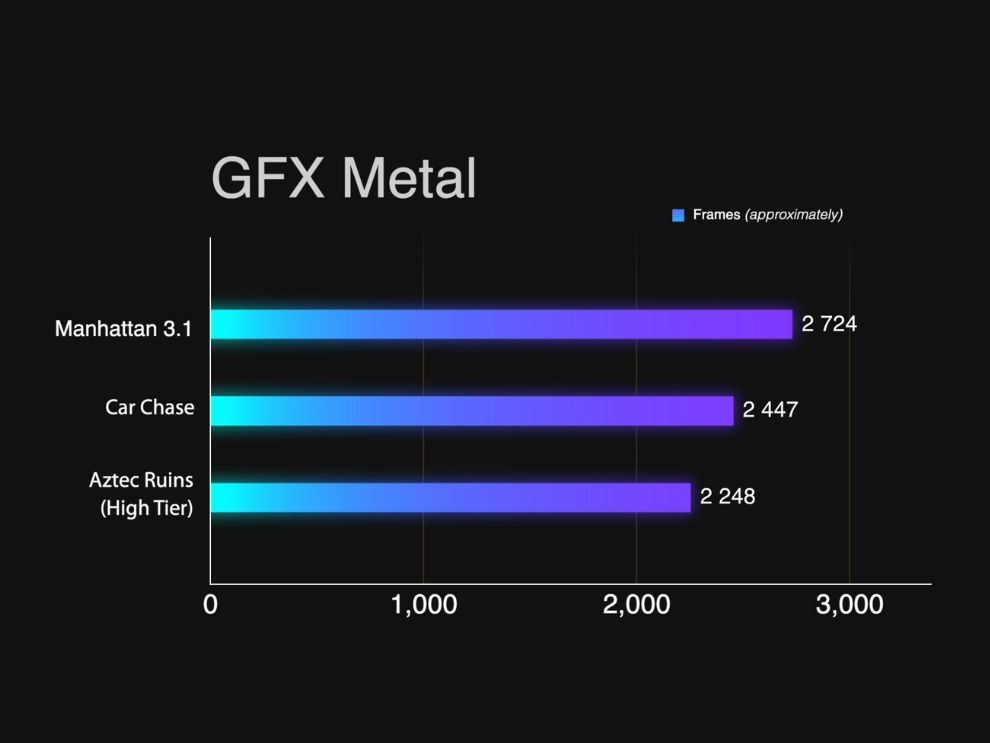 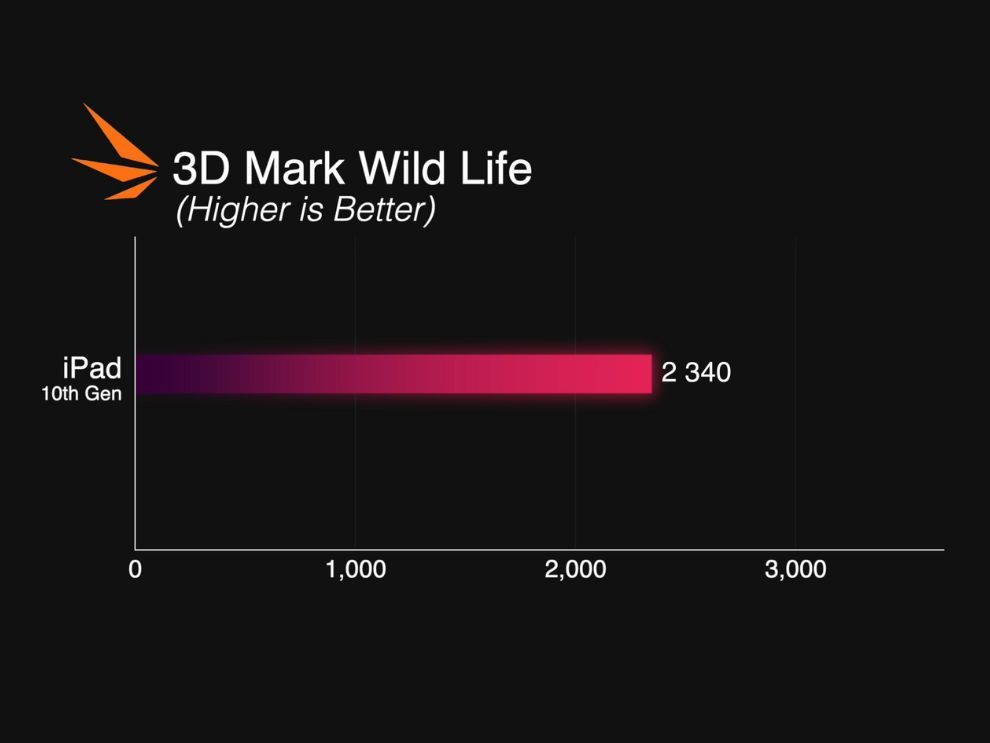 Apart from the benchmark tests, the gaming experience on the Apple iPad is pretty decent in real life. I played games like Call of Duty Mobile, Apex Legends, Asphalt 9, and the like on the iPad, and during my usage, the tablet felt pretty okay for gaming. Again, this is not the best gaming experience for mobile gamers, but it is good enough for casual gaming if you want to hop on a quick session with your friends. I also used the 10th generation iPad for work, and after using a bunch of Android tablets before this for similar tasks, I can easily say that the experience is way more smooth on an iPad, even without features like the Stage Manager. 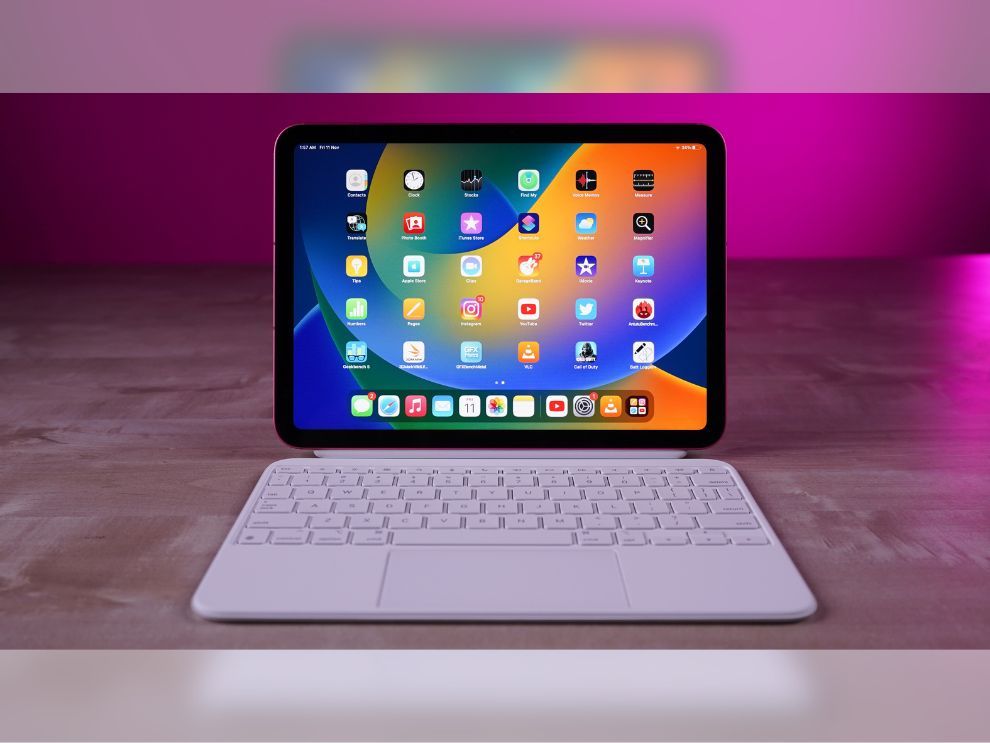 Now, while talking about performance, it is also important to mention the convenience features that the 10th-gen iPad brings. First and foremost, is the inclusion of a type-C port. Not only does this complete Apple’s shift to type-C ports on the complete iPad lineup, but it will also ensure faster data transfers and charging speeds, and you will be able to use other chargers with the iPad (despite Apple being generous enough to put an adapter inside the box). 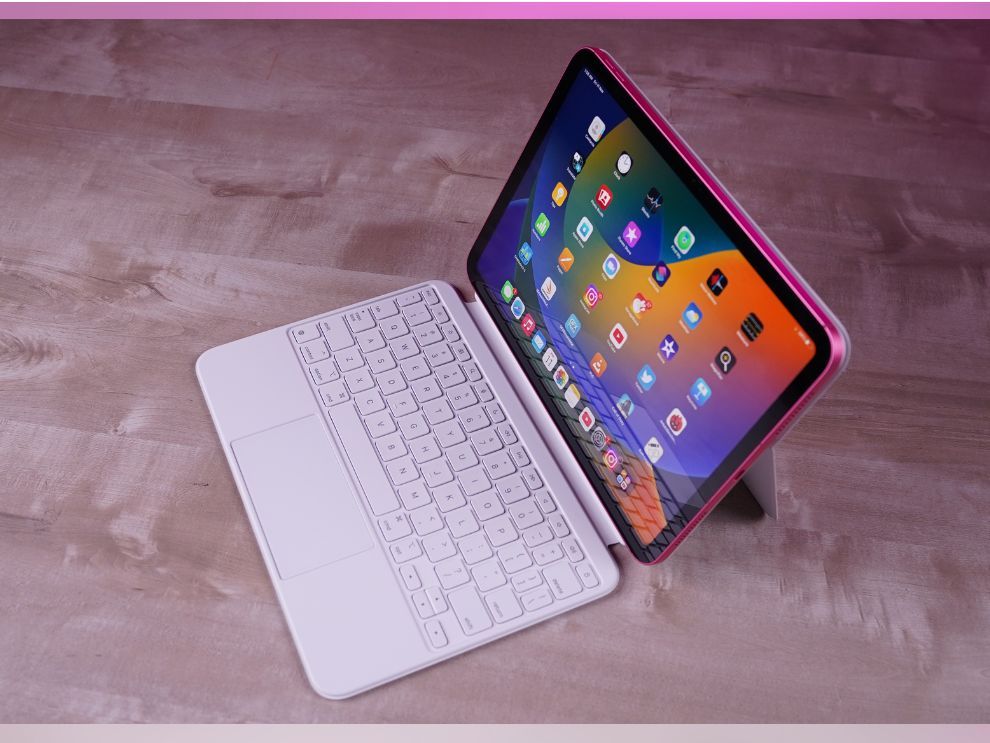 While we are at accessories, it is important to mention the keyboard that Apple launched with the iPad. Now, this is an additional accessory, but this is probably the best keyboard for any iPad out there. There are proper function keys, and the rest are also nice and clicky. This keyboard also has the biggest trackpad on any iPad model, it is just that it is too white and will get dirty very quickly. Apple has not launched the new keyboard in any other colour option.

With the 10th gen iPad, Apple has also moved the front camera to a landscape orientation, making it easier to take work calls for users. This is the first iPad to have the camera on the side bezels instead of the top. The Center Stage feature on the iPad is also pretty cool, and the camera follows you if you switch places in your room. However, the Apple iPad still lacks Face ID and Touch ID remains the only biometric option, which is integrated into the power button. 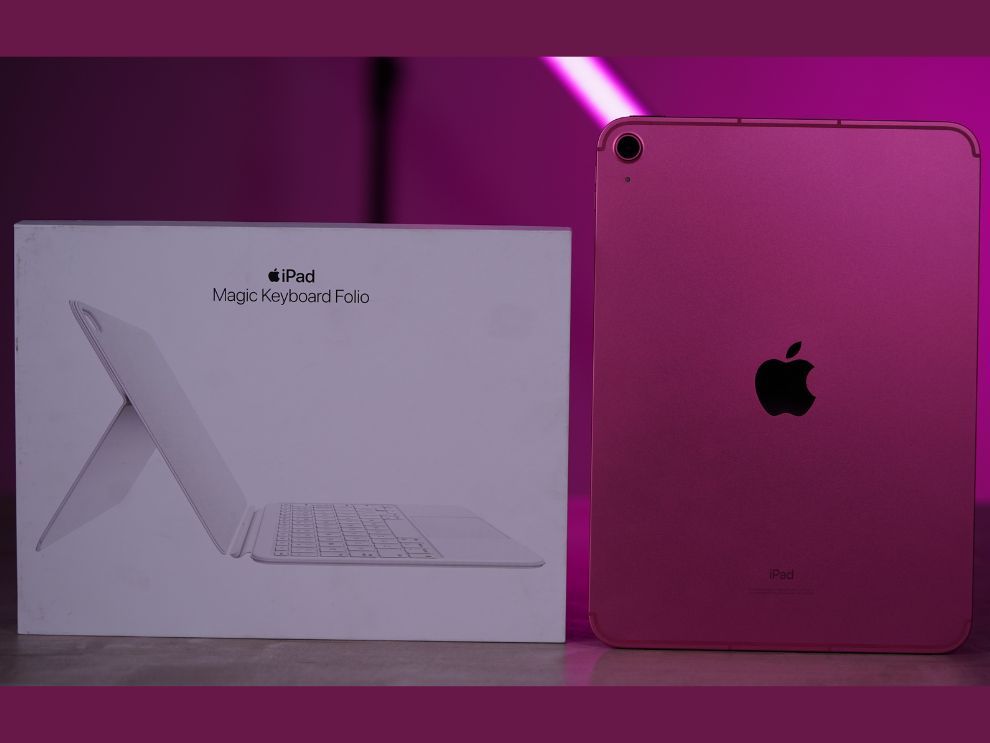 The 10th generation Apple iPad uses a 12-megapixel rear camera and a 12-megapixel front shooter with a 122-degree field-of-view. The rear camera on the Apple iPad is pretty decent. While it’s not the best camera we have seen on an iPad, it is pretty good for your casual social media posting. The pictures are true to life and the colours seem pretty accurate. The images look good on a smartphone, and the rear camera can also record up to 4K videos in 60FPS. 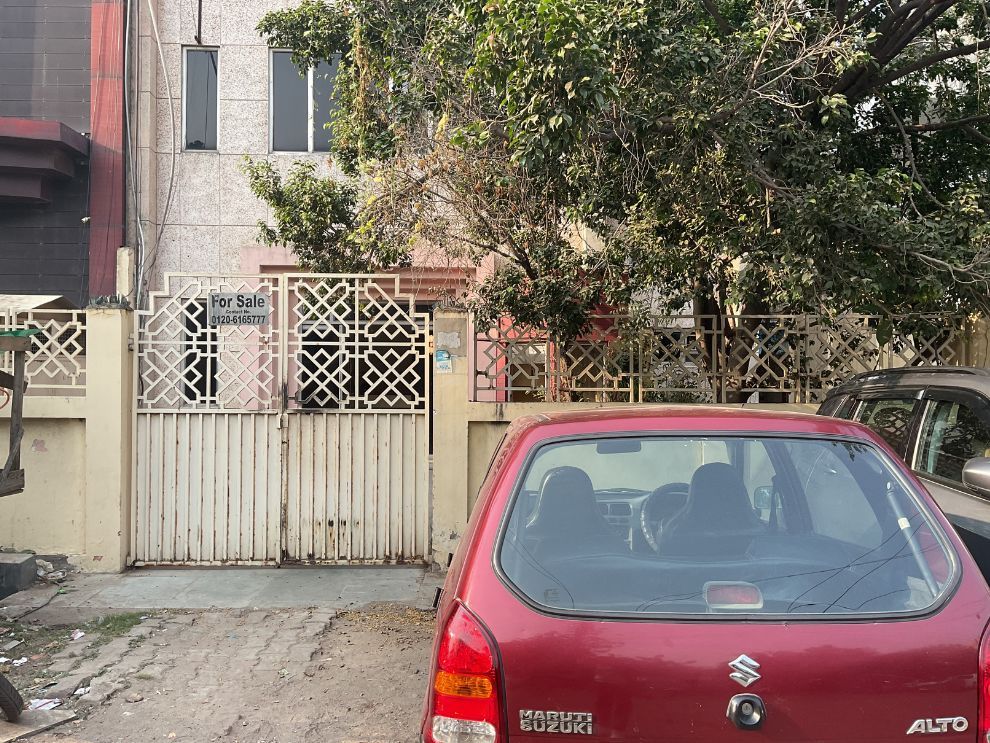 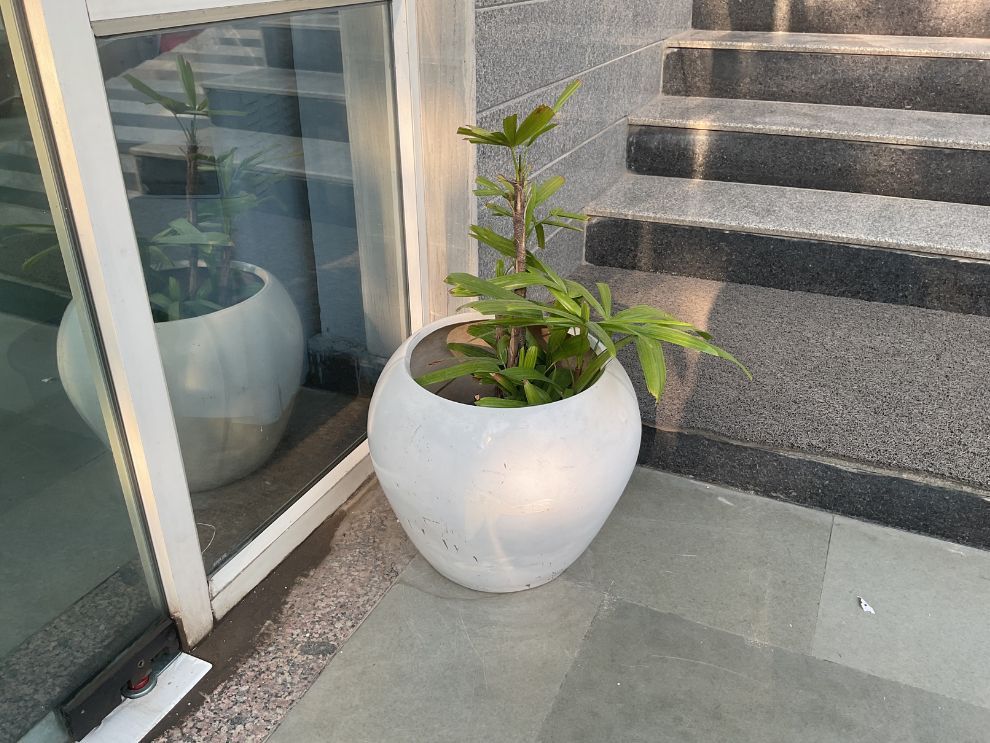 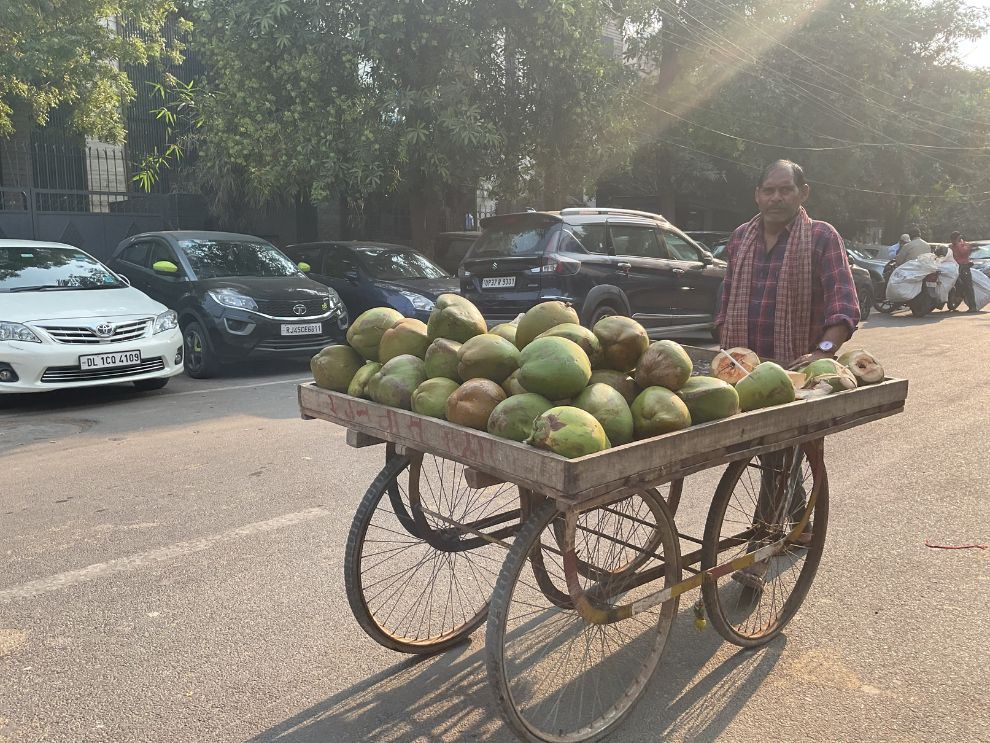 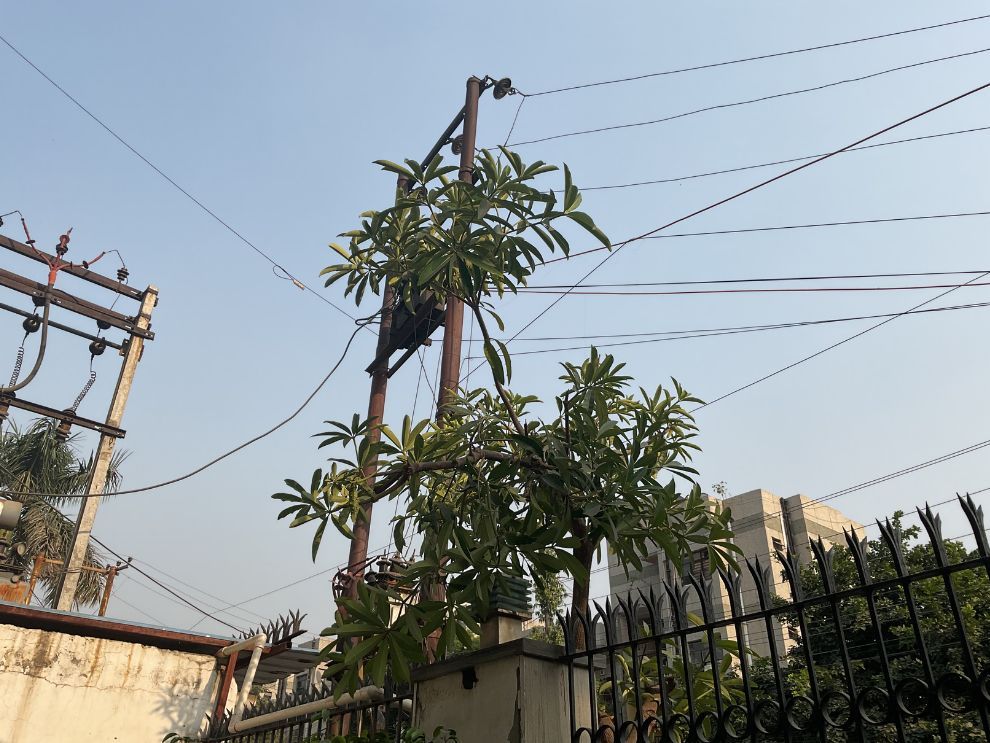 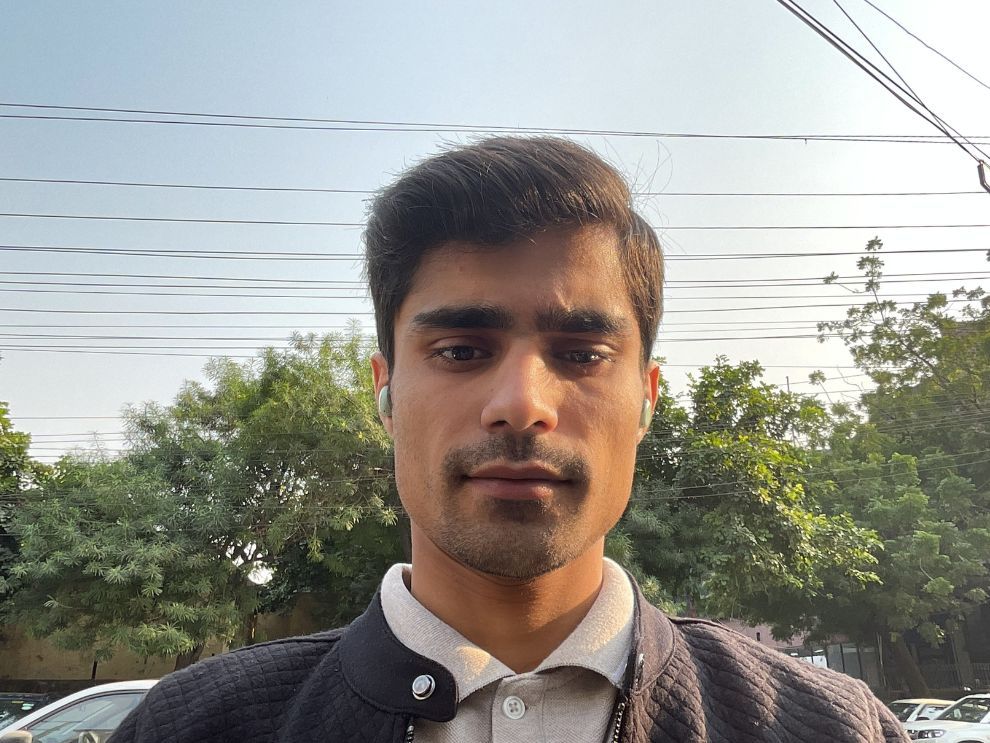 The front camera on this iPad is the same as the one used on the M1-powered iPad Air. There is a 122-degree field-of-view and the front camera also supports Centre Stage that makes sure you’re always in the centre of the frame during calls. The video call quality is very good and is at par with some of the flagship Android tablets in the market.

Coming to the battery, the 10th-gen iPad’s battery is pretty great. The tablet will easily give user’s a whole day’s battery if they are using the iPad for work or entertainment purposes. Apple claims up to 10 hours of surfing the web on Wi‐Fi or watching videos on the iPad. However, in our video loop battery test, the Apple iPad’s battery lasted for 5 hours and 45 minutes at full brightness and on the highest quality, while being connected to Wi-Fi. It is important to note here that during our test, we also had the location and Bluetooth turned on. Further, using a SIM on the Cellular variant will result in additional battery drain.

This battery backup is better than many competing devices but falls short of the iPhone 12 and iPhone 12 Pro Max’s video loop test from 2020 before the two smartphones received the iOS 15  and iOS 16 updates.

The 10th generation Apple iPad supports 20W fast charging and according to our test, the Apple iPad takes about less than an hour and a half to charge from 0 to a full 100 per cent. Apple has also included a 20W type-C charging adapter inside the box, which can also be used to charge your iPhone. You also get a braided type-C to type-C cable with the 10th-generation iPad. 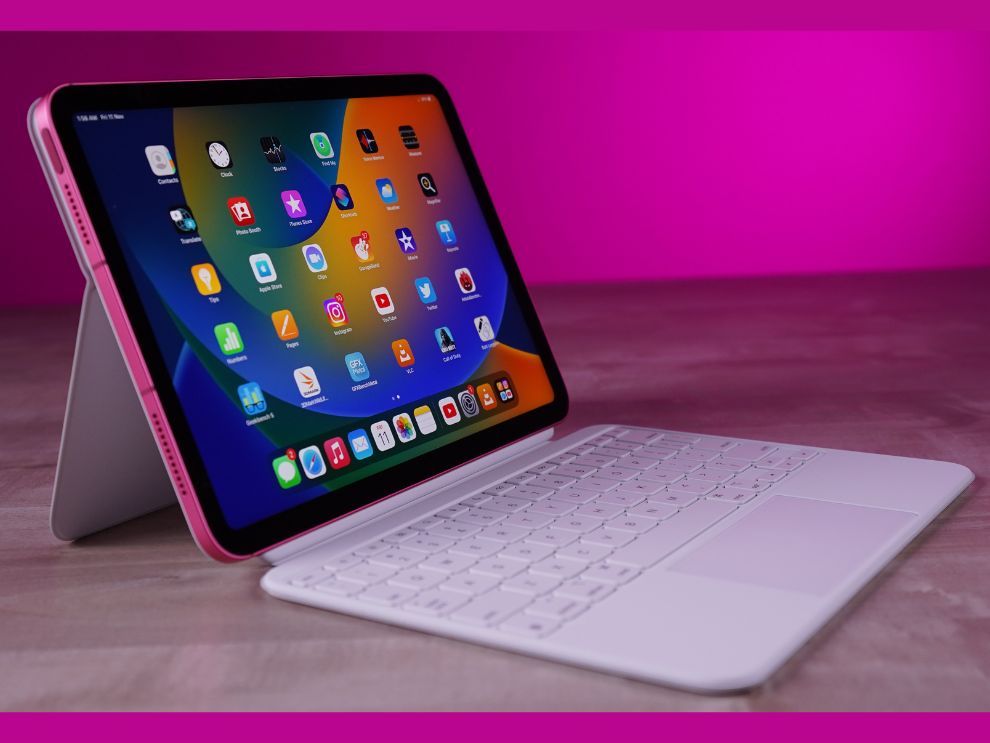 So the Apple iPad 10th generation comes with many improvements and is finally in line with its siblings in terms of design, charging capabilities, and more features. While it doesn’t allow you to use the full might of iPadOS 16 with the A14 Bionic chip, it is still a very good all-rounder in the tablet space and is perfect for someone looking for their first iPad. Apple has finally listened to users and made some important improvements. These include a more premium design, a USB type-C port, camera placement, and more. However, the display is not the best we have seen in tablets in this range, and the iPad Pro isn’t much of a gaming device. Furthermore, Apple could have added support for the second-generation Apple Pencil, and the hiked price over last year’s model is something that may discourage a lot of buyers.

With everything said and done, the 10th generation iPad does offer a more refined experience and comes with many important enhancements. It is still a pretty good device for things like writing, designing, or sketching. The entry-level still supports only the first-generation Apple Pencil, which works perfectly, just the charging mechanism is inconvenient and will require users to buy an additional type-C to a Lightning port. Answering the question at hand – is the new iPad worth its Rs 44,900 starting price? For those looking for their first iPad, yes, the 10th gen iPad offers a proper iPad experience, despite its shortcomings. However, if you are in the market for a tablet under Rs 50,000, there are better, more powerful options in the Android space.