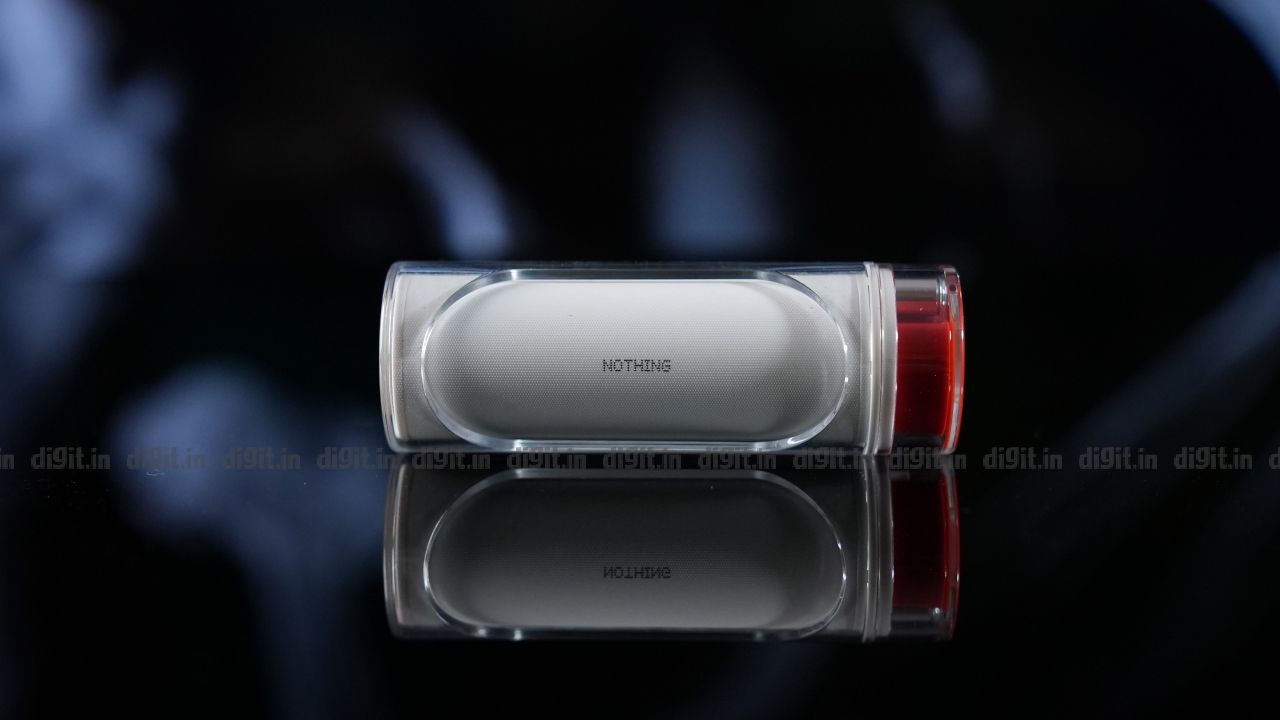 Established by the co-founder of OnePlus, Carl Pei and backed by individuals like Casey Neistat, Nothing as a brand has come to be synonymous with transparent tech. They started off with the Nothing Ear (1) in 2021. They have since launched a phone, the Nothing Phone (1) and now, another pair of earbuds, the Nothing Ear (stick). All of these launches were received by the consumers with much hype and their shtick was that they were transparent products with decent build quality and top notch aesthetics.

However, we know what happened with OnePlus, the other company that was founded by Carl Pei. They started off on a strong note, but have since lost a lot of momentum they had gained in the early days of the brand. So with the Nothing Ear (stick), their third launch since their start, were they able to live up to the expectations set by the Phone (1) and the Ear (1)? Well we found that out when these newly launched pair of earbuds showed up at the Digit Test Centre. Here’s what we found out –

Nothing Ear (stick): Build and Design

As Nothing says, the case’s design is inspired by a lipstick case, meaning that you will have to rotate the bottom of the case, either clockwise or anticlockwise to open it. The buds slot into their place and are held in by magnets which are fairly strong. Just opening the case and getting the buds out is an experience in itself. As you rotate the bottom, the Nothing branded solid side of the inner part, makes way for the earbuds cavity. The case is pocketable for the most part but if you wear skinny trousers or jeans,then the bump will be quite prominent.

The buds themselves follow a design language that is similar to that of the Ear (1). The major differences are in the design of the part that goes into the ear and the base of the stem. The earbuds essentially are the same as the Ear (1). However, given their half in ear design, they do not have the extended ear tip. It is replaced by a pill shaped grill that covers the driver outlet, and an additional vent that is there. The bud itself has a matte finish white plastic cover that we assume is there to aid in the grip. As for the stem, there are no ANC microphones, and the controls, instead of being on the face of the stem, are on the side. We would have preferred the on-stem controls, but the side mounted ones were also responsive and did not present us with any problems. 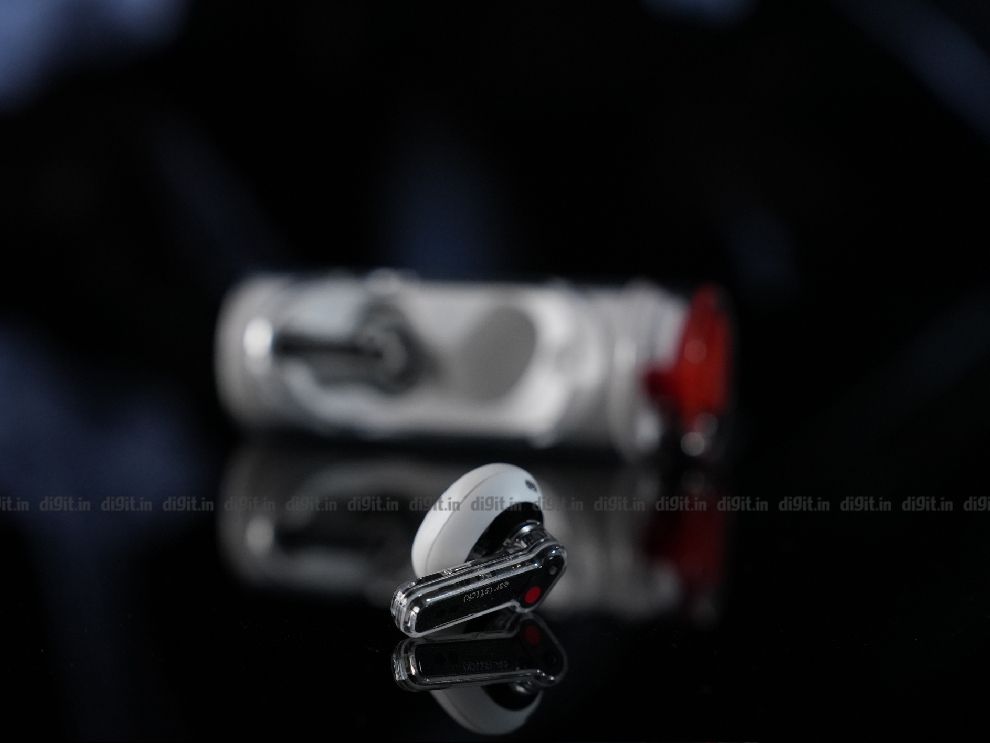 This is where our issues with the Ear (stick) started. The half-in-ear design of the buds made it painful or difficult to wear for extended periods of time. The lobe is broader than other popular half-in-ear buds like the Apple AirPods (Gen 3). This made the fit feel a bit insecure in our case. While the earbuds have been touted by Nothing to have a great fit in your ears, in the Digit Test Centre, we passed them around to the team members to try on, and barely anyone found the buds to be a comfortable fit. Now we understand that this issue is very subjective, and there would be individuals who find the fit super secure. But when you are looking at a product that has been made for the masses, we believe that a design with a more universal fit would be the better way to go. 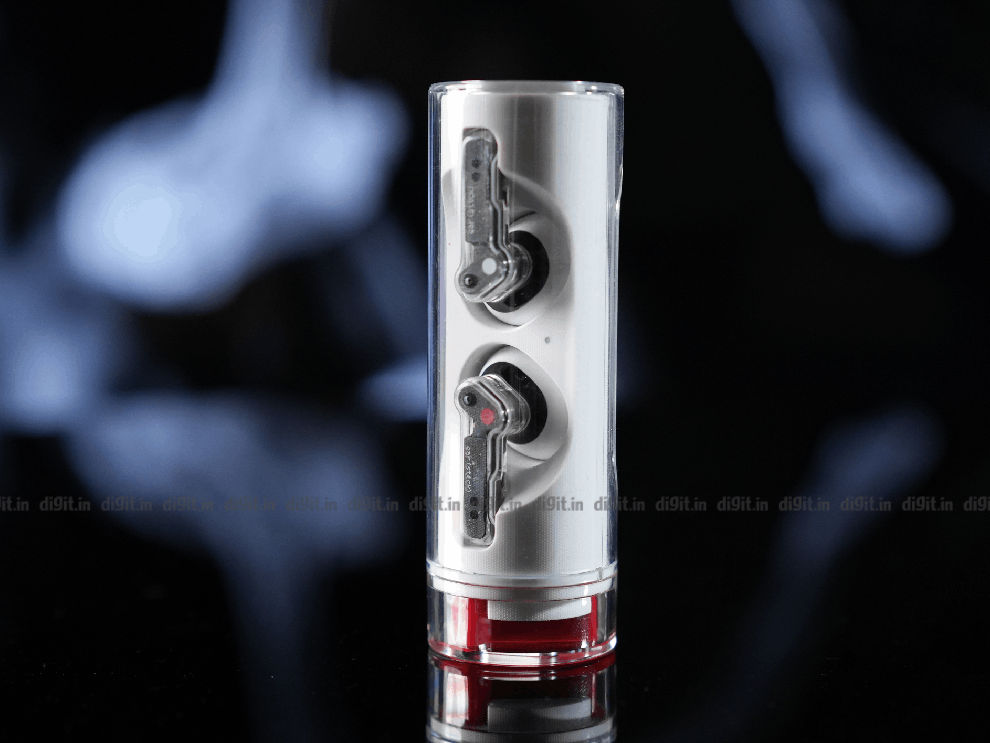 Another thing that irked us was the build materials that Nothing chose for these TWS earbuds. The problem with using a transparent glossy plastic to make the case is the degradation that it goes through during day to day use. The state of the case of the Nothing Ear (1) that the reviewer owns goes to say a lot about the scratches that the case of the Ear (stick) would pick up. And, trust us when we say this, the cosmetic appeal quickly wears off. The last complaint that we have about the build and design of the Nothing Ear (stick) is the gap between the inner cylinder and the outer housing of the case. It is a safehouse for all the pocket lint and dust that the buds would be exposed to, during your use.

When talking about features, we didn’t find anything outstanding about the Nothing Ear (stick). The Nothing Ear (1) was launched to be a part of the sub-6k price bracket (although at the time of writing, it was not available on Flipkart) . But the case of Nothing Ear (stick) is fairly different from their cousins. Since there is no Active Noise Cancellation like the Ear (1), we expected the buds to have decent passive noise cancellation. However, given the half-in-ear design and the poor fit which we experienced, the passive noise cancellation is not the greatest. This however, can be a plus also if you are a daily commuter and want some noise from your surroundings to seep in for spatial awareness.

As for the app, Nothing has introduced a new app called the Nothing X. 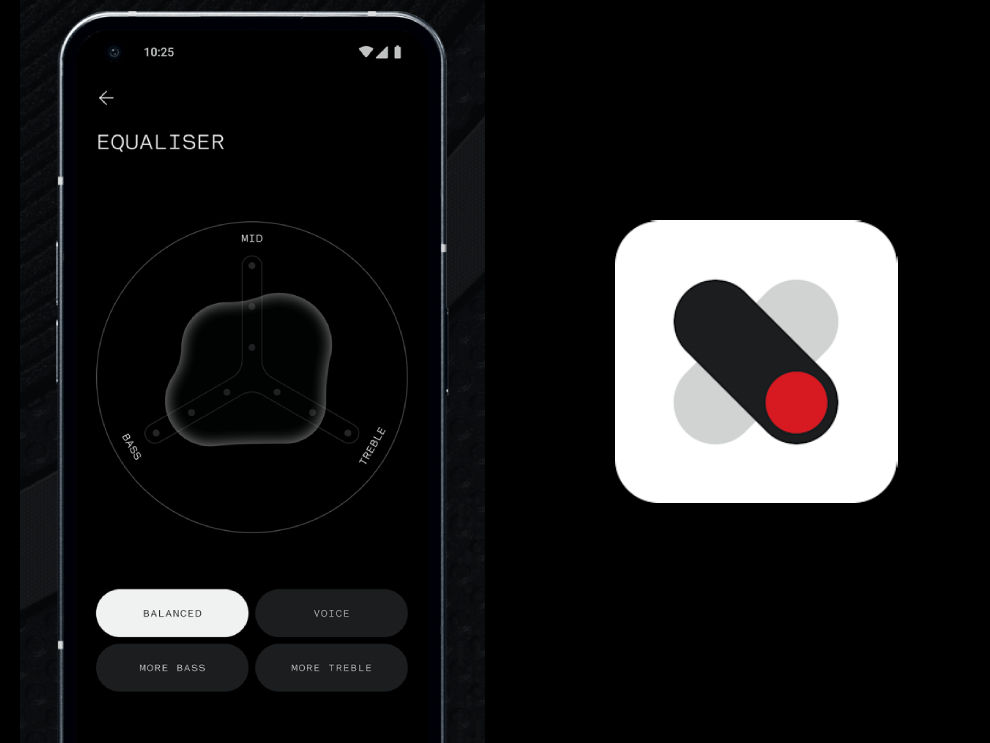 It is where you will find all the customisation options that you need. It comes baked in with touch customisation options and a tri-band equaliser which you can use to change the sound output of the buds to your liking. However, the touch single press is not customisable at all. It is bound to play/pause and answer/hang up calls and cannot be changed. For the price that you are paying for the Nothing Ear (stick), you get some pretty decently loaded pair of TWS earbuds from companies like Sony, which are in direct competition with Nothing in the market. Even the Ear (1) which launched last year and currently retails at a lower price, comes packing with a more diverse feature set.

When we come down to the performance part, the story of the Nothing Ear (stick) continues. During our frequency response test, the results were not a hundred percent accurate as the design of the buds did not allow them to have a sung fit with the coupler of our test rig. But, from what we heard during our testing and observed from the graphs , we were not impressed. 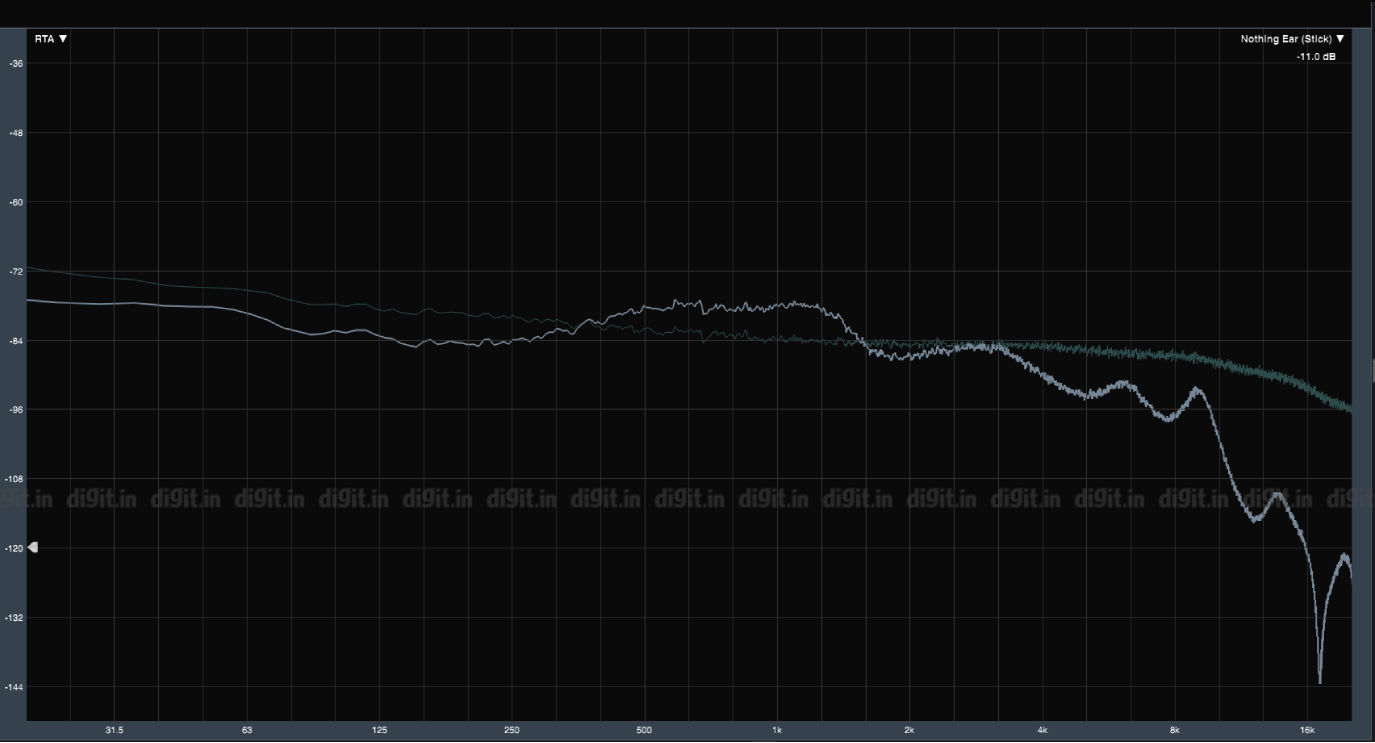 You can see in the graph that we have here, when compared to the flat response of the pink noise that we use as the standard in our tests, the high mids were boosted. What happens in this case is that when listening to music and consuming other forms of content, the S and T sounds in the audio are amplified more than normal. This not only adds an unnecessary harsh frequency that is being pumped out by the drivers, which otherwise fared well, but also it causes fatigue. This means that listening to heavy metal tracks on this headset that you’ll need to actively avoid. 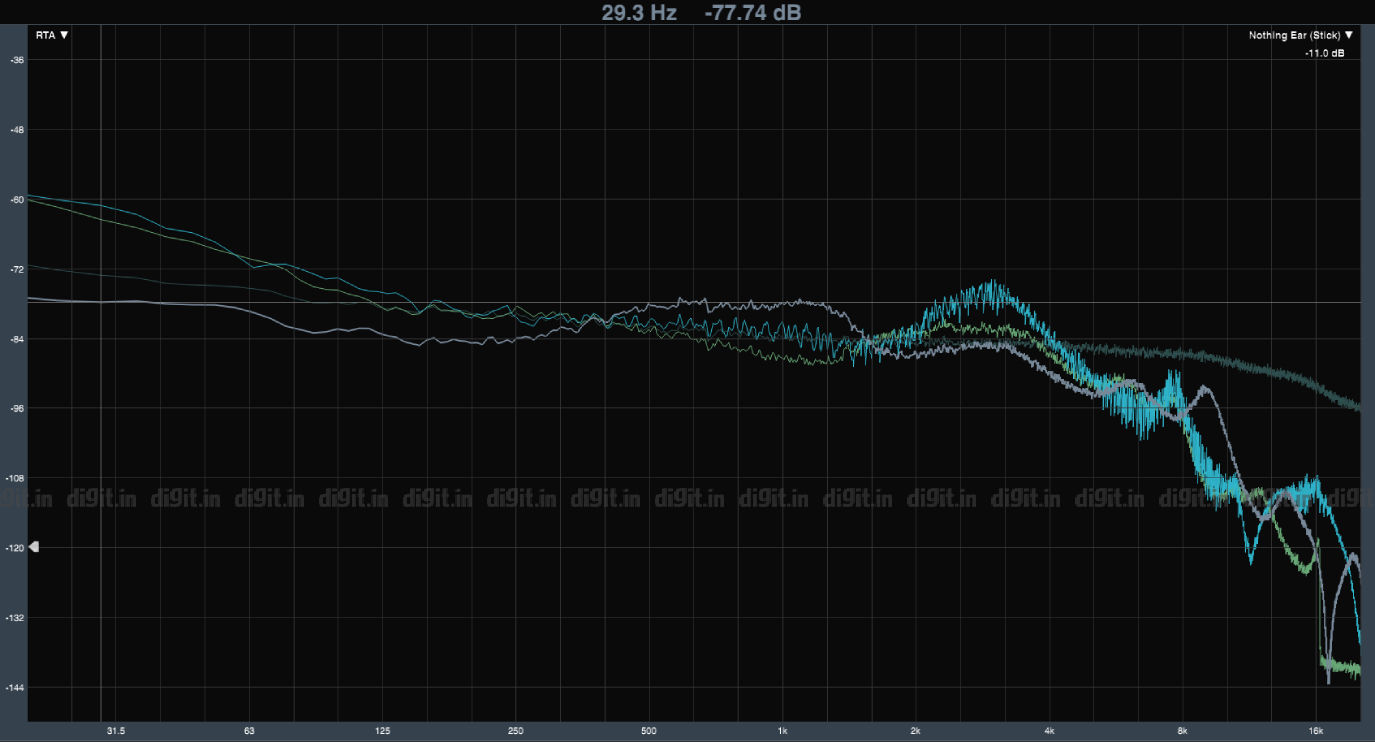 As for other frequencies, which are the highs and the lows, they are adequate. Neither too harsh nor underemphasized. Circling back to the fit of the buds, if you do not get the tight seal around your ears, the bass might feel underemphasized. So we would highly recommend you to just try these out once before buying. Because if the fit is not great for you, then you will have a lot of problems, underwhelming bass in your tracks being one of them.

If the fit is normal, then you are in for a treat. Given the half in ear design, the grill on the lobe of the buds sits right at the entrance of your ear canal. Which means you can feel the bass in the entire region around your ears. And, if you are a bass head, then it doesn’t get any better.

In terms of connectivity, we did not encounter any problems. There were no lags or stutters in audio even when we moved away from our phones while it was still connected to the Ear (stick), with music blasting through them. The latency was minimal when consuming content or playing games. All thanks to Bluetooth 5.2 that these earbuds are equipped with. They also have Google Fast Pair and Microsoft Swift Pair enabled which meant that connecting to the devices that support this technology was even quicker and easier than normal.

Last but not the least, we tested the battery life of the Nothing Ear (stick). As per the claims made by Nothing in their advertising material, the buds when listening to music are supposed to last for up to seven hours and have three hours of talktime. And, with the juice that is stored in the charging case, the battery life is supposed to go up to 29 hours of listening time and up to 12 hours of talk time. The Nothing Ear (stick) also supports fast charging which means a ten minute charge can fetch you about nine hours of listening time. 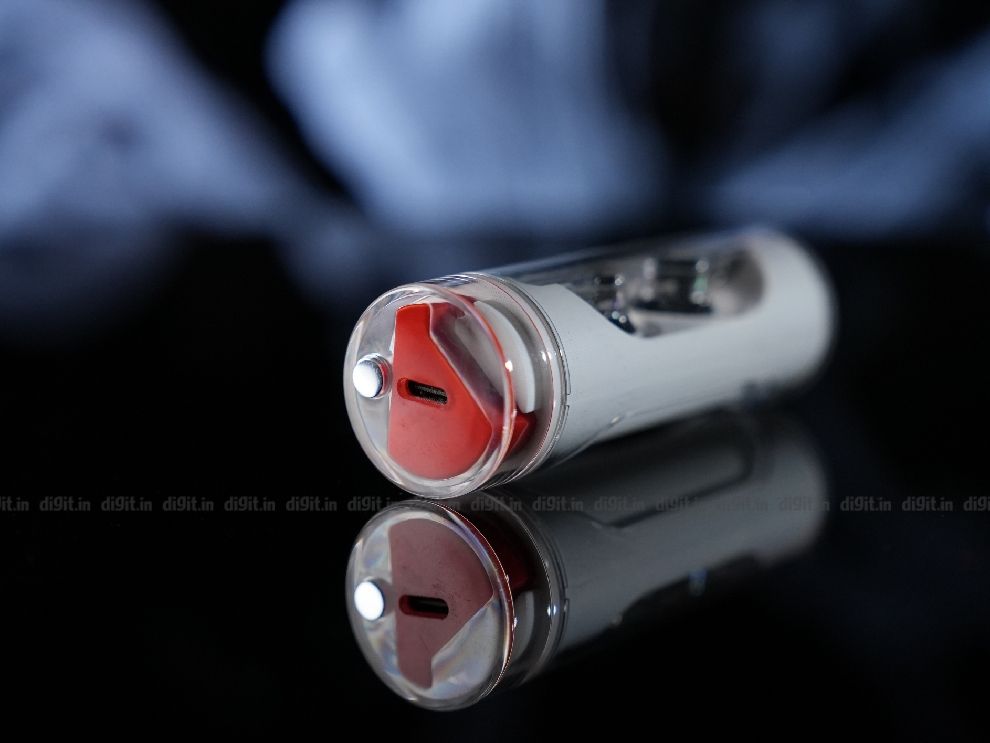 When these claims were put to test, to our surprise, almost all of them stood true. The buds in our music playback test, lasted for about six and a half hours at 60 per cent volume. The case provided an addition of five more rounds of charging with some juice left in it to spare. The Nothing Ear (1) had lasted for about half the time in our tests, but that was with ANC on. However, since these lack ANC, the battery life wasn’t surprising. Nevertheless, if you plan on using these for extended periods of time, then the charge on these buds would be the least of your concerns. 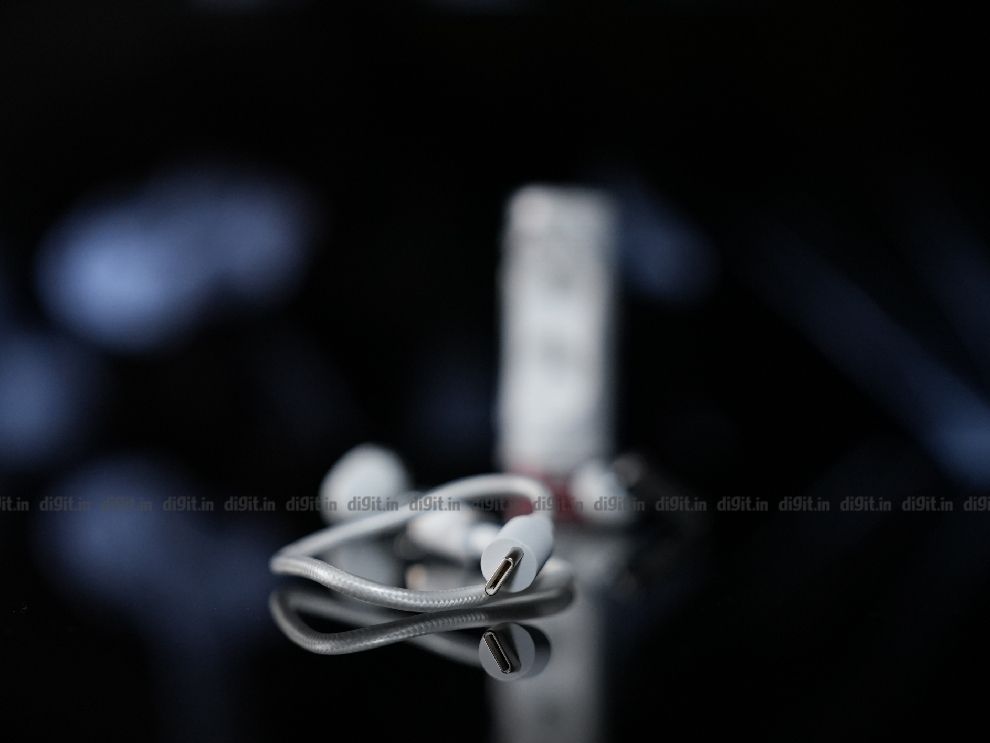 Even if the buds and the case run out of charge, you can top it up using the included USB-C to USB-C cable. The cable carries the same design forward from the Nothing Ear (1). However, there was no wireless charging, but we doubt that given the shape of the case of these buds, there was any scope to fit that in.

All in all, the Nothing Ear (stick) makes for a decent pair of earbuds. The overall design and quality of the buds is great. And, if looked at in isolation, even the sound quality is decent for the price. However, given the half-in-ear design of the buds, there are a host of problems that might come your way. We have talked about it a lot in our review, so there’s no need to reiterate them again.

Apart from that, there are some tiny improvements that these buds have also seen over the Ear (1). For example, in our review of the Ear (1), we had complained about the mediocre wear detection on the buds, which has seen a significant improvement here. The buds are not feature packed, but what is here is well executed and adds to making these a well rounded package. The sound signature isn’t something that will appease the audiophiles, but for day to day use, it is passable. 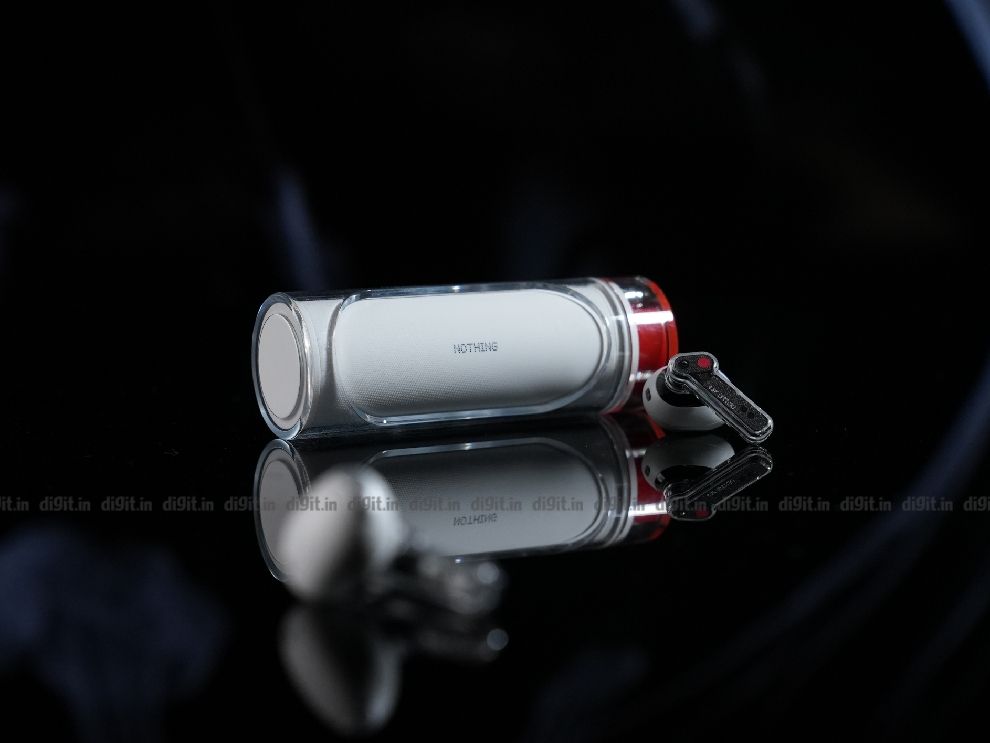 The buds themselves are impressively designed and will be a conversation starter if you show up with these to your next hangout session. There are some material related gripes that we have, and the price of ₹8,499 is a bit steep in our opinion. You have options like the Sony WF-C500, and the Nothing Ear (1) retailing at a similar or even lower price, which can be looked at.

While the Nothing Ear (stick) might not be one of the best in the market like the Ear (1) when it came out, it is a pair that will be on the wishlists of many. And if you decide to buy them and they fit, you will possibly enjoy owning these earbuds.