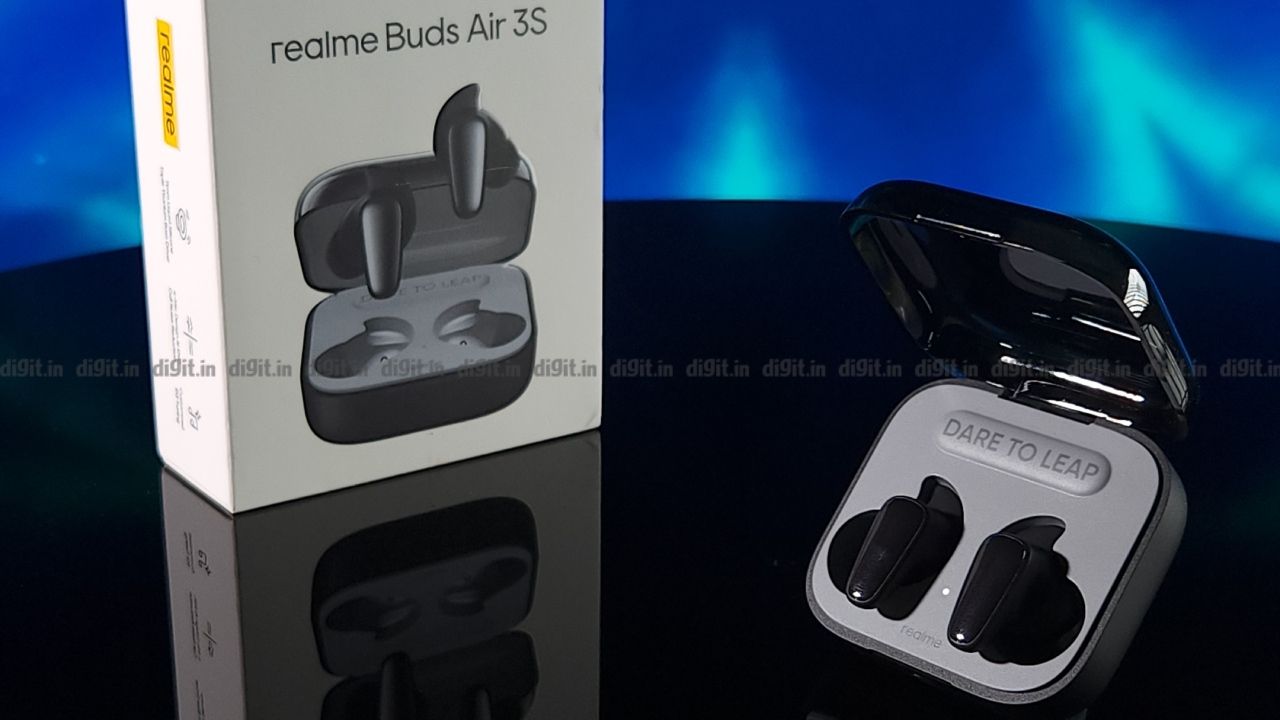 Realme has stepped into the Indian market and has made its mark by making quality products across categories. When it comes to True Wireless Headphones, the brand has established a dominant presence in the Indian market with its budget offerings. However, Realme is not the only brand that is active in that space and brands like Oppo, Xiaomi, and One Plus too are trying their best to make their mark when it comes to budget True Wireless Earbuds.

To ensure that their presence is registered in the market, they recently came out with the Realme Buds Air 3S. And, when these budget TWS earbuds which are retailing in the market at the time of writing for ₹1,99 (launch price – ₹2,499), we put them through their paces to find out where they stand in this overly crowded headphone price segment.

Realme Buds Air 3S are a treat to look at. Our black coloured review unit looked gorgeous when we first pulled it out of its box. The lid of the case was translucent giving a nice peek into the charging case, which had a grey coloured housing to hold the headphones in place. The housing had a matte finish, with the Realme logo subtly placed below the charging indicator LED, and the company’s slogan – Dare To Leap, printed on a slightly raised bump on the top half of the case. The hinge did not have a metal support bracket which is always appreciated, and is a regular feature on some of the TWS cases that score some of the highest points in the build quality department.

The earbuds themselves were pretty to look at, and wear for extended periods of time. The short stem had a glossy black tinted finish which added a subtle bling to the otherwise relatively muted design. They sport a small wing that adds to the grip of the earbuds inside the earlobe, and the three different sizes of tips generally cover all the different bases. The earbuds were sturdy, and were comfortable to wear for extended periods of time. 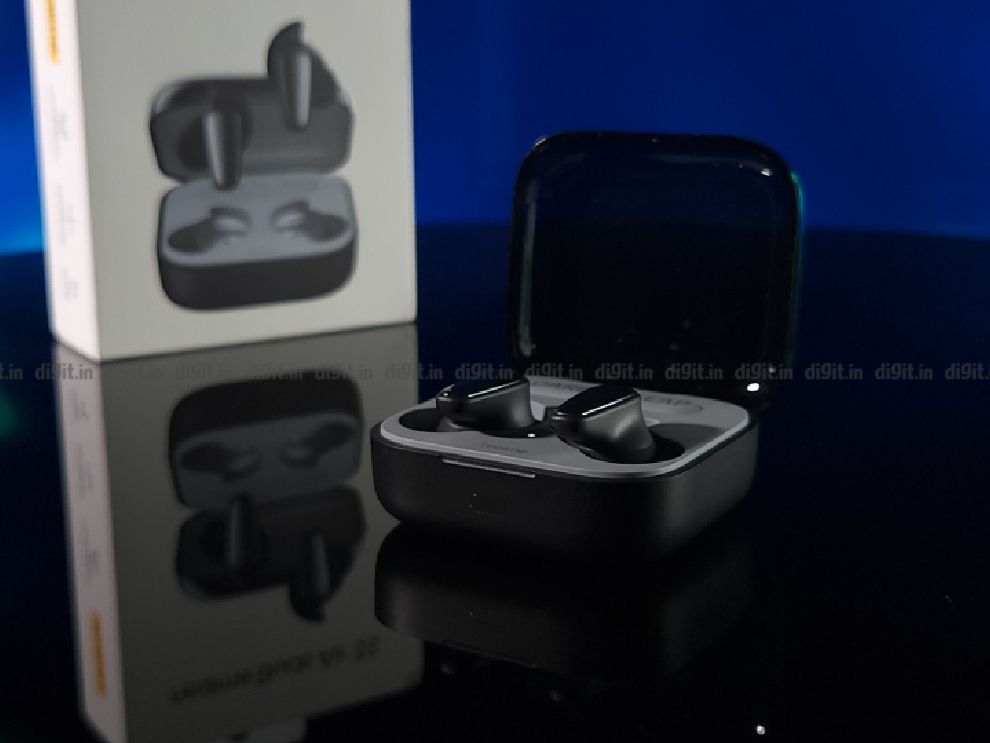 One gripe that we had with these TWS earbuds was the glossy finish of the plastics. While it looks awesome during the early stages of use, when the earbuds have been taken out of the box, the finish just deteriorates very quickly. Within a week-long usage of the buds, both the case’s lid and the stems of the buds had significant signs of wear. It picked up scratches like it was a brick of butter being rubbed with a red hot knife. This is something that you will need to look out for. If you are someone who does not handle their tech with extreme care and caution, then you will be sacrificing the otherwise beautiful look of the overall package.

When talking about features, the only thing that we’d like to say is – Well done, Realme. While the buds are not packed with features like some of its competitors in the market, whatever is there is so well executed that you cannot look past it. 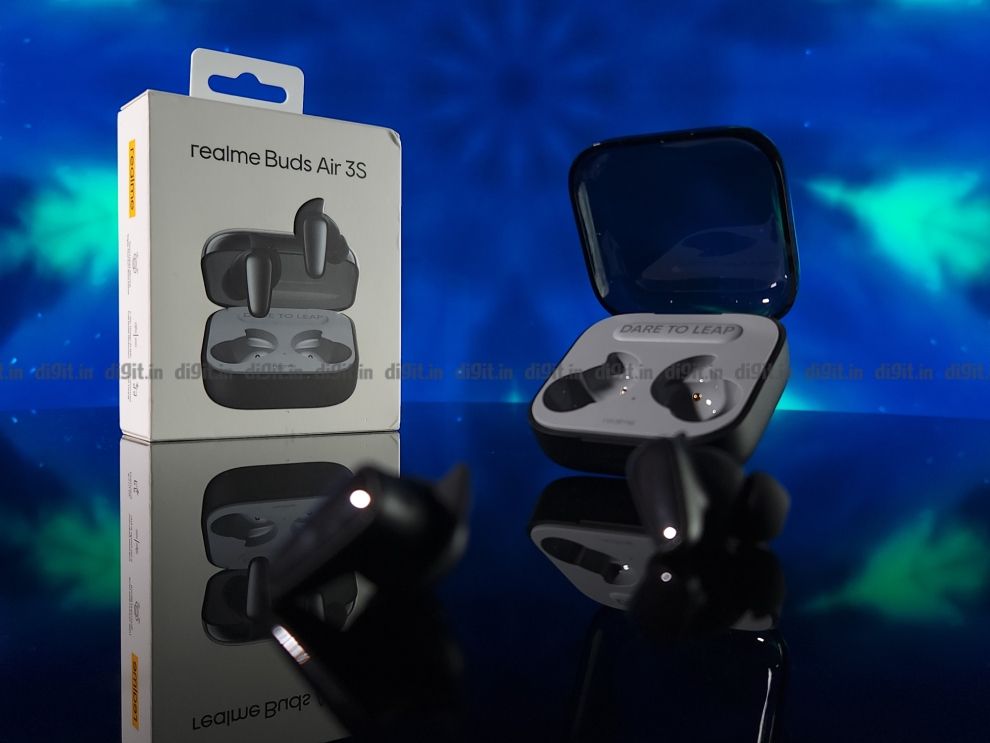 For the amount of money that you are spending, you get great touch-sensitive controls on the stem, both visual and audio indicators of the battery level of the device, and a good collection of customisation options in the app that compliments these buds. It packs a multi-band EQ which you can use to customise the sound of the earbuds to your liking. The EQ has four presets – Bass Boost, Clear Bass, Nature Bass, and Clear Vocals. But, you can add additional custom profiles as well!

The controls can also be customised to a certain extent, but there is not much flexibility here. There is Dolby Atmos support too, meaning that high quality audio files will be reproduced well by the 11mm liquid silicone triple titanium bass drivers that it comes packed with.

Another thing that we liked about these earbuds was the instant pairing which worked like a charm with Android devices. But, when it was the turn of the iOS devices, it had its share of hiccups. The buds also feature multi-point connection, meaning that you can connect to two devices at the same time.

As for the app, as we said earlier in the review, it was adequate. It had decent features and customisation options. The UI was intuitive and easy to use and it looked like a finished and polished product unlike the offerings from certain other brands. There is the option to turn on a game mode in the app, which brings down the latency to a claimed level of 69 ms. 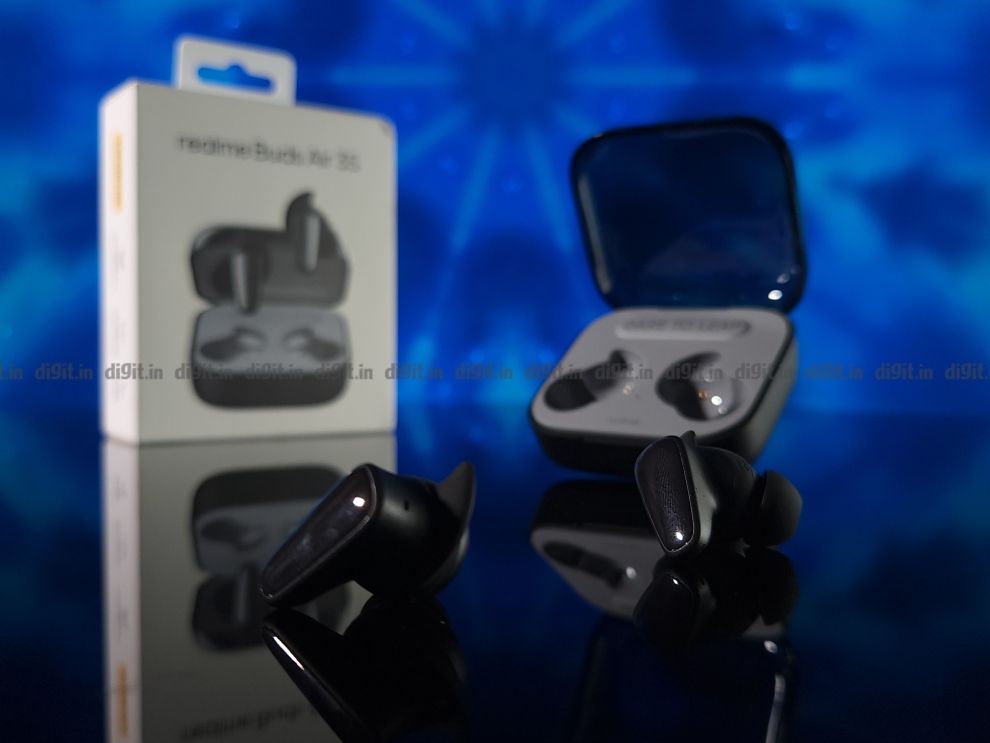 One feature that we had been looking forward to, was the heavily advertised AI Noise Cancellation. While it worked well in most environments, in the ones where we had a room full of people and some music playing in the background, all the hype came crashing on the floor. We also took it out for a spin on one of our Mumbai local train rides. There too issues persisted. The problem that we faced in these two places was of our audio being cut abruptly mid-sentence. What we think happened was that the ‘AI’ confused our audio with the background noise and removed chunks of it, assuming that it was not something that needed to be conveyed to the person on the other end of the phone call.

Performance is one section where most budget TWs earbuds tend to fall apart and show their true colours. However, when it was the turn of the Realme Buds Air 3S to be tested for their frequency response, the results were… To say the least, interesting.

As you can see in the graphs below, the bass was boosted. This is something that we expected to happen as the company itself advertised the bass-heavy sound signature of these earbuds. But, as we moved to the mids, the Buds Air #s surprised us with their stellar performance. 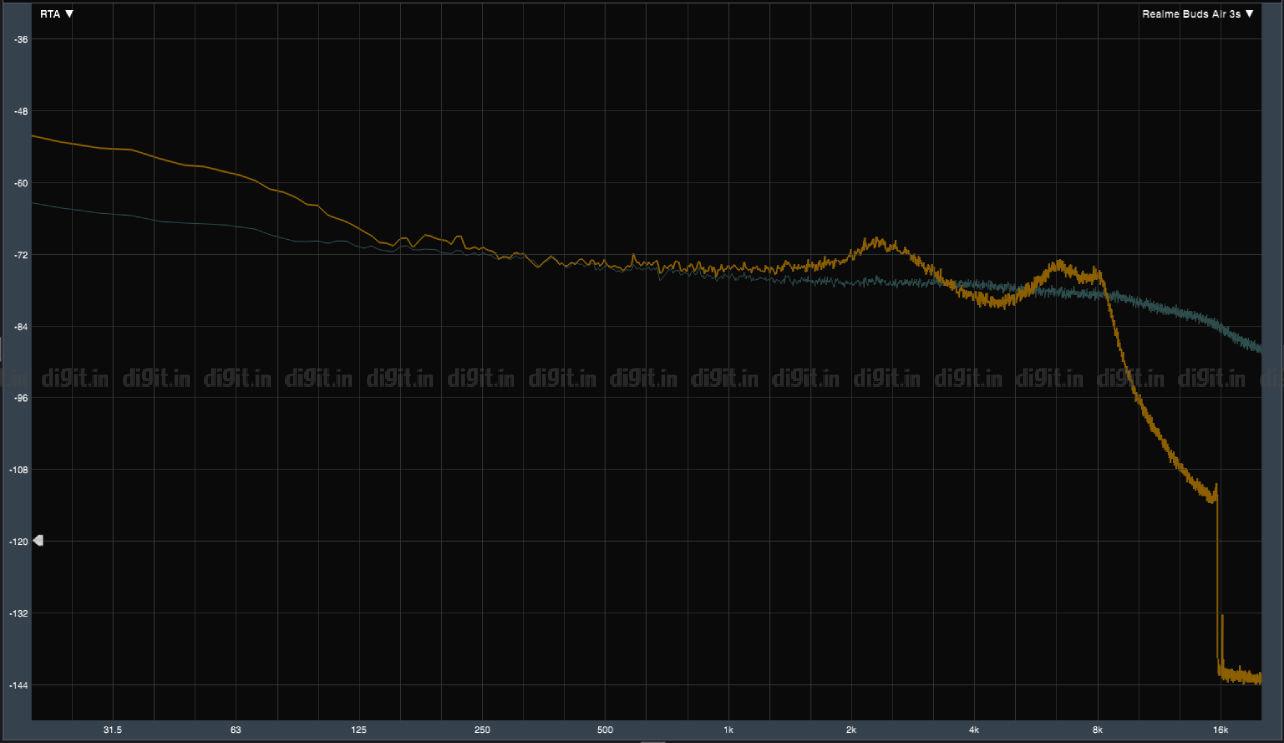 Their sound signature, to our surprise, very close to the pink noise that we use as a standard in our tests. The highs on the other hand, showed a very interesting pattern. In some sections, they were overemphasised, before falling down, and then rising again. This meant that the vocals of the artists voicing the songs that we use in testing, like Rescue Me by One Republic had the voice of the singer brought down significantly due to the overly heavy bass. 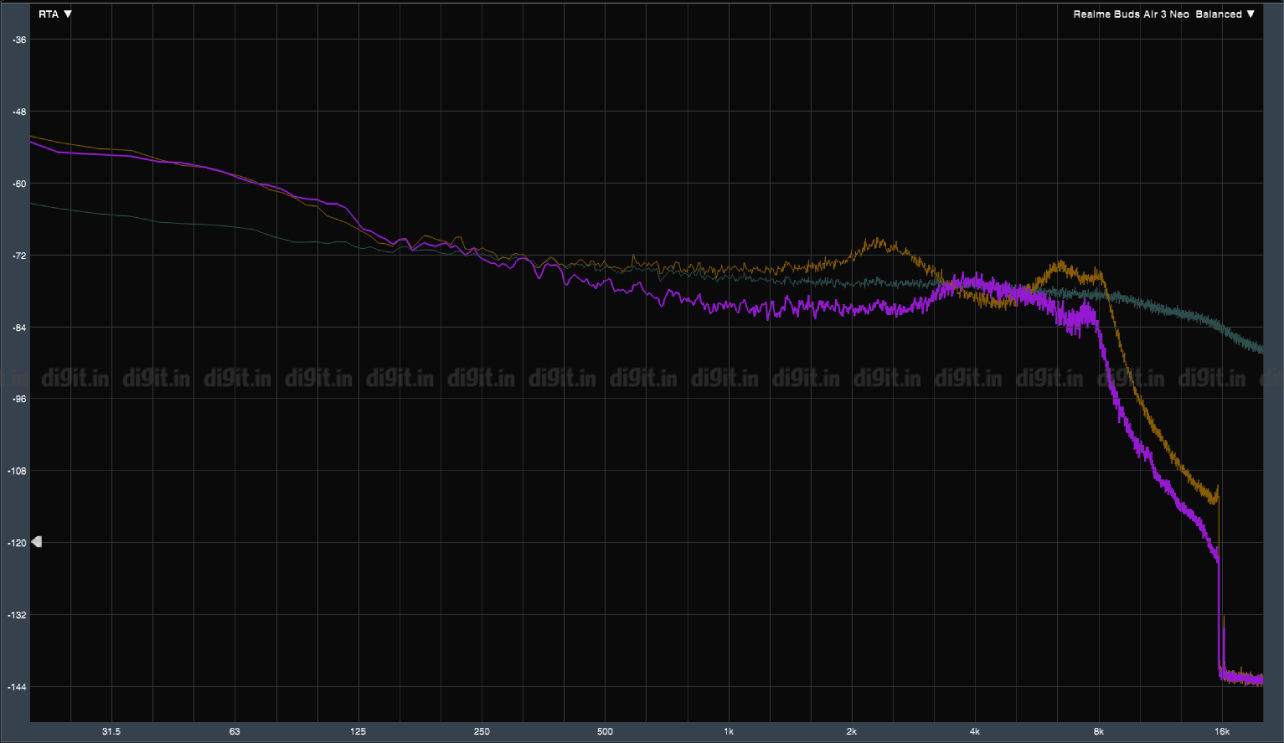 While this may make the earbuds a perfect pick for the bass heads, the purists at Digit, who love the audio that is as close to neutral as possible, this was a bummer. But then again, in the sub 3k price bracket, there are hardly any earbuds that would give us that sound signature. Realme’s own Realme Buds Air that retail for a higher price than these did not perform that well when compared against these. That strengthens the case of these earbuds.

During the battery tests, the Realme Buds Air 3S faired decently well. Their claimed battery life was a total of 30 hours (music playback), with the buds being promised to deliver 7 hours of playback on their own. So, when we put these buds through our testing process, we found that they almost stood to the claims that Realme had made. 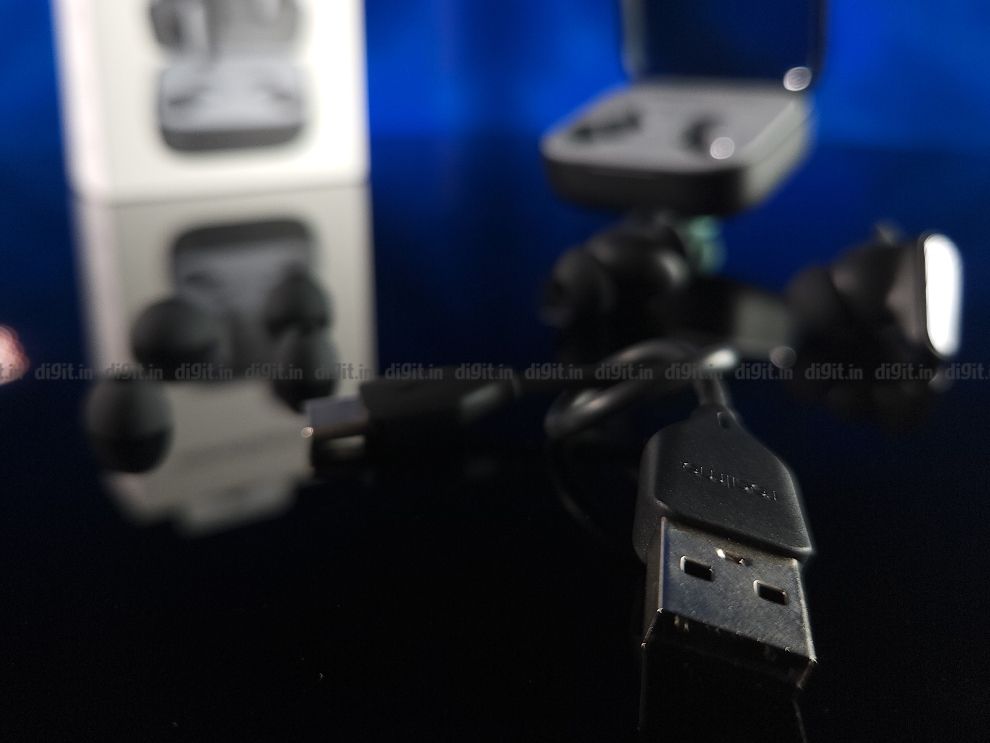 The buds during our test lasted for about 6 hours and 50 minutes. During the test, the volume level was set to 50 per cent and the lack of ANC meant that they fell just shy of the claimed 7 hour mark. 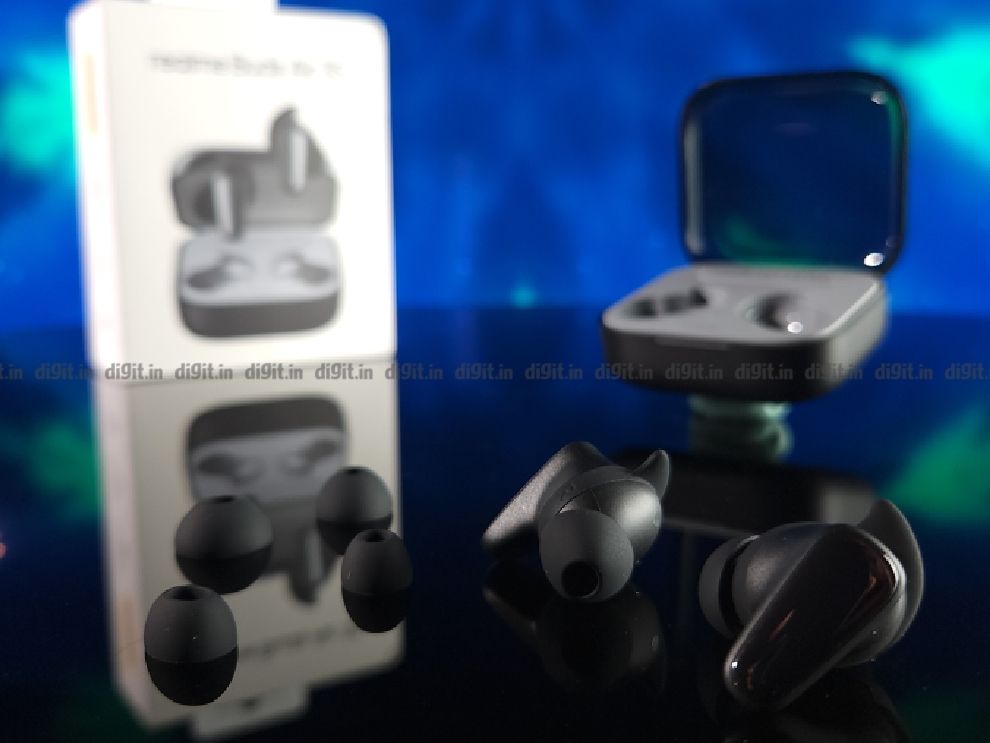 For charging, these earbuds sport a USB C port which supports fast charging. As per the claims made by Realme, these buds can provide 5 hours playback time if they are charged for just 10 minutes.

After thoroughly testing the Realme Buds Air 3S and comparing them with their rivals, we can safely say that they are a decent overall package. They sport a decent build quality and pack features that you can rely on. The only downside, which may be a deal breaker for many, is the bass heavy sound signature that you get out of the box. If you want, you can tune the bass down using the EQ that is built into its app, and enjoy a nice music listening session. However, if you want to look for other options in the price range, then offerings from OnePlus and Oppo are the way to go for now. These include, the OnePlus Nord Buds and the Enco Buds2, that sell for a cheaper price than the Buds Air 3S, can be the ones you consider.