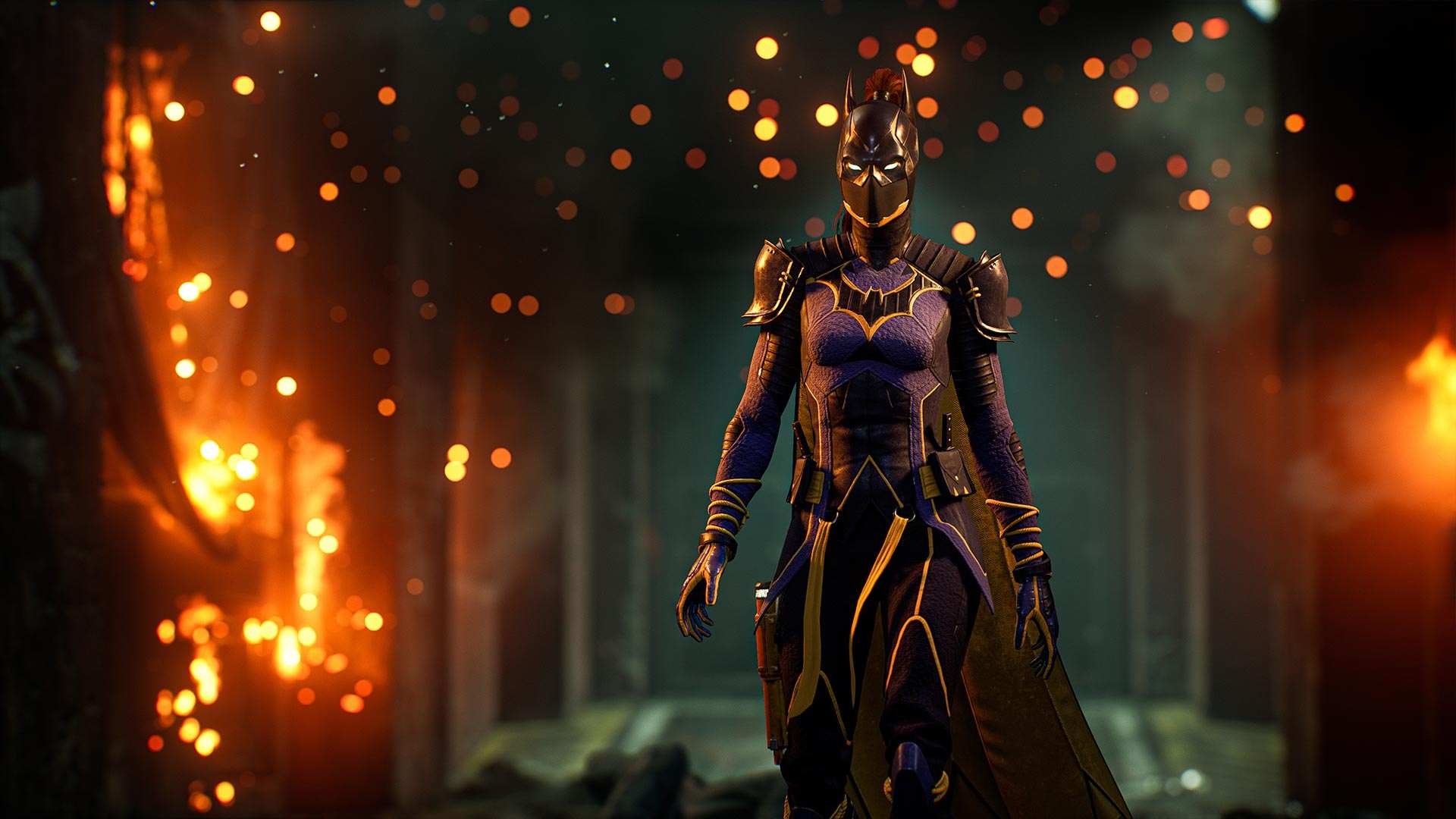 The great tragedy of Gotham Knights — out Friday on PC, PS5, and Xbox Series S/X — is that it was always going to be pitted against the beloved and critically-acclaimed Batman: Arkham games. For one, it’s the first open world Gotham City entry since 2015’s largely well-received final chapter, Batman: Arkham Knight. And two, more importantly, Gotham Knights comes from the same developer — in WB Games Montréal — who gave us that series’ poorest instalment, the 2013 prequel Batman: Arkham Origins. The comparisons were inevitable and unavoidable.

But in the seven years it’s taken for a return to Gotham, a rival superhero has left its mark on the video game world: Spider-Man. The PlayStation-exclusive won awards after its arrival in 2018, delivered a beautiful-looking spin-off in 2020, and is due for a sequel next year. Interestingly, you can feel traces of inspiration from Marvel’s Spider-Man here. Gotham Knights certainly doesn’t have the same cinematographic flair or fluidity to combat that the Spider-Man games have done so well, but there are traces of stylish camera angles at times.

Annoyingly, Gotham Knights also shares some of its problems. Marvel’s Spider-Man was rightly criticised for its lack of open-world innovation. Its New York seemed a little too crime-infested, with a carjacking, an armed robbery, or a hostage situation happening in virtually every other city block. All that is true of Gotham Knights’ Gotham City as well. But unlike Spider-Man, there’s even less variety on offer here outside of petty crimes. The side quests are meh, forgettable, and repetitive.

There’s still fun to be had. Whenever you encounter a new criminal activity, Gotham Knights will assign primary and bonus objectives. The latter can be stealth-based, or something different like an environment takedown. On top of that, Gotham Knights encourages you to scan and identify potential informers among the criminals. (You can hit down on the D-pad to trigger AR scan, which puts a red outline around all threats. And holding down the button gives you more info on each criminal.) If you interrogate them before putting them to sleep, you can discover locations of future crimes. While you can always jump straight into fisticuff combat and ignore the rest, it’s interesting to figure out a gameplan that allows you to achieve more.

Everything You Need to Know About Gotham Knights

But the Gotham of Gotham Knights is not a living breathing world. Apart from the comments you hear as you pass them by on the street, there’s little to no interaction between the heroes and the denizens of Gotham they protect. In Marvel’s Spider-Man, New Yorkers would applaud, whoop, or recoil as you swung close to them or moved amidst them. In Gotham Knights, they will move if you try to run them over with the Batcycle. But outside of that, there’s nothing. What makes it laughable is that civilians don’t react to crime at all. As armed thugs shot at cops in a police vehicle, I saw a passer-by with an umbrella stroll by, as if it was a lovely Sunday morning.

And it isn’t particularly rich either. It’s too …clean? It’s almost as if the Gotham Knights set designers and their teams weren’t given time or resources to make the city feel real. The world feels empty, and comes across as a sandbox built just for you. This Gotham doesn’t feel like a city riddled with crime, and not one occupied by millions of citizens who go about their lives every day. In this sense, Gotham Knights could’ve looked to The Batman — Matt Reeves’ moody take on the Dark Knight, starring Robert Pattinson — which knew not only how to create a mood, but a distinct Gotham that was ugly, lived-in, and infested.

Gotham Knights does share one aspect with The Batman. And it’s that we almost never see Gotham during the day. To prevent themselves from having to design and animate the city twice, WB Games Montréal have come up with a justification to keep our heroes cooped up in their Belfry headquarters when the sun is out. Every time you leave the HQ — to patrol, solve crimes, collect clues, and progress the story — the clock fast forwards to night. The clues you return at dawn with help unlock new crime locations for the following night.

But once you venture out into the Gotham night, there’s no option to switch between the four heroes. You must return to the Belfry HQ to change characters, which isn’t convenient as it “ends” that night of patrol. Any unsolved crimes will disappear off the map. In other words, Gotham Knights encourages you to stick with the hero you’ve chosen every night.

This is a weird sort of restriction, one that I never understood. Why is WB Games Montréal getting in the way? Is it implying that the other heroes are out and about — and hence unavailable? That logic wouldn’t track as you learn, time and again, that all four heroes were “doing” the same task you were given. Non-playable characters (NPCs) will often talk to character #2 about an event that character #1 was involved in. It’s unintentionally funny. It then reads as though the rest of them were just chilling at home.

The problem is that Gotham Knights hasn’t really figured out how to make it seem that all four characters have their separate lives. Yes, their personalities are different — Jason takes things head on, Tim seems laid-back (and loves taking selfies), Dick is a bit closed off, and Barbara is the group’s heart — but it pretty much stops there. (They also have different superhero friends, with the likes of Superman, Wonder Woman, and Black Canary dropping into your emails, depending on what hero you play as. But that’s an Easter egg, it doesn’t mean anything.)

And that — the lack of differences — extends to combat in Gotham Knights. All four heroes can perform melee (A on Xbox, cross on PlayStation) and ranged attacks (Y or triangle), in both “light” and “heavy” forms. A tap performs a light attack, while holding down the same button does a heavy. Heavy attacks can break through enemy armour, and open them up to more blows.

When you’re first asked to pick between the four heroes at the start, Gotham Knights offers a glimpse of what they are good at, letting you decide what your preferences are. For example, Nightwing can jump around, Robin is shifty, Batgirl is tech-heavy, and Red Hood has guns. (Combat isn’t always compulsory — you can use stealth to get around certain situations.) But despite that, playing as every character feels more or less the same.

You can help expand the differences with their additional skills. Levelling up in Gotham Knights grants ability points to every character, which can be spent on their individualised skill tree. You can also unlock new “Momentum Abilities” — think of them as powerful combos — by completing in-game challenges. But you won’t feel any of this for the first few hours. It’s only as you delve deeper into their skill trees that you will be treated to abilities that push them in different directions. While Batgirl becomes more of a hacker, Robin prefers decoys and evasion, while Red Hood and Nightwing embrace brute force.

The four heroes also share the aforementioned vehicle: the Batcycle. Every time you hit its dedicated call button (up on the D-pad), the Batcycle emerges out of thin air, as if it was cloaked like James Bond’s car from Die Another Day. (A bit like the horse in The Witcher 3.) And in what is a campy inclusion, there’s a button to do wheelies. Because, why not? Despite that, the Batcycle isn’t great fun to drive in Gotham Knights. It never felt as thrilling as it did to see Anne Hathaway’s Catwoman roll around in The Dark Knight Rises, the climactic third chapter in Christopher Nolan and Christian Bale’s trilogy. But I was forced to use it anyway, as Gotham Knights doesn’t offer fast travel options for the first few hours.

When distances were short, I relied on “parkouring” — if you can call it that. As with the Batman: Arkham games, you can use the grappling hook and latch onto the edges of most buildings and structures. Before you get to the end of your tether, you can jump and spring yourself forward. Then, you try and latch again with the grapple. Unlike Batman though, none of the four heroes can glide. (Well, not until you unlock Nightwing’s glider anyway.) The heroes just sink to the ground, in between the jumps and the next grapple on Gotham Knights.

More importantly, traversal in Gotham Knights doesn’t have the same flow or smoothness, as in Batman: Arkham or Marvel’s Spider-Man. (This is a general issue in fact. Body animations don’t feel as natural as what we’ve seen elsewhere, be it superhero games or the likes of The Last of Us Part I.) Swinging around New York was one of my favourite things to do in the latter series of games, but I never felt that sense of joy here. It felt like a stop-and-start thing, where I was constantly losing momentum. With Batman: Arkham, even though it was never as cinematic, the Dark Knight’s cape added to both flair and functionality. Capes are impractical in most cases, but I missed them in Gotham Knights.

What I also missed was support for cross-play. While Gotham Knights allows for two-player co-op in campaign and four-player co-op will be added in an upcoming standalone mode, you can’t play with friends across platforms. PC, PS5, and Xbox Series S/X lobbies are treated separately. For what it’s worth, Gotham Knights gives you a variety of ways to look for co-op partners. You can manually invite friends, open your lobby to friends of friends, or even have a public lobby should you desire. I opted for the last of them, and had a couple of players drop in. Gameplay was smooth and I encountered no issues.

This was also largely true of performance in general with Gotham Knights. The only time I felt stutters or frame drops was when I was on the Batcycle at high speed. A lot has been made of its 30fps console restriction — the demands on PC to achieve 60fps are, well, staggering — but what’s more important is how it performs with those limitations. This is no Cyberpunk 2077 at launch, where the game regularly dropped into single-digit frames per second. Sure, Gotham Knights could have been better and more equipped, but it’s playable and that’s what matters.

In fact, that’s how I feel about Gotham Knights at large. Drawing from the refined toolkit that powered Batman: Arkham and Marvel’s Spider-Man, WB Games Montréal has produced a cookie-cutter superhero experience that’s not looking to push any boundaries. It’s got flair in parts, an attempt to do a bit of heartfelt storytelling, and limited ideas for what an open-world Gotham can be. But it’s also lacking charm, the oomph and drive to its narrative, and the desire to be something special. Gotham Knights is a cash grab in the era of superheroes — and nothing more.