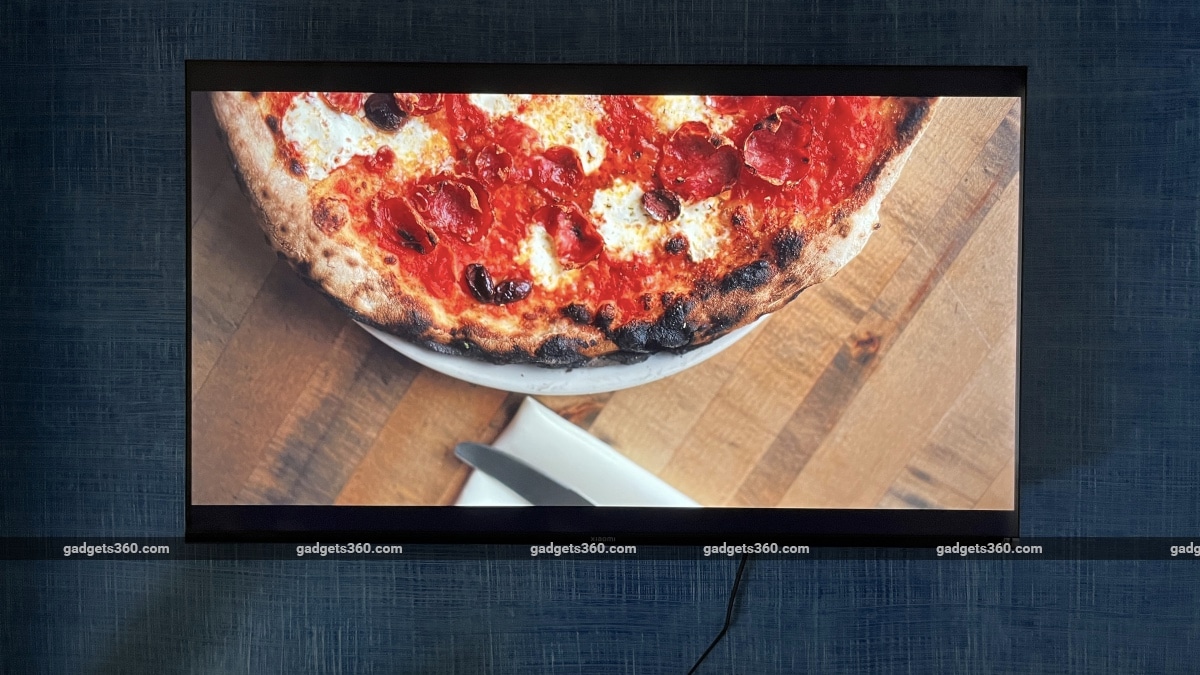 Xiaomi has, in a short time, made big strides in the television business in India. Among the leading brands in the smart TV space and a popular option for buyers looking for affordable, value-for-money big-screen TVs, Xiaomi’s televisions are usually on the radar of many buyers in India. While it does offer some high-end options including OLED and QLED TVs, the brand is best known for its affordable products, making the new Xiaomi Smart TV X Series particularly relevant in its growing product portfolio.

Priced at Rs. 34,999 in India for the 50-inch variant (L50M7-A2IN) on review here, the Xiaomi Smart TV X Series is similar to the Mi TV 5X that was launched in 2021, but with a more spartan approach that sees fewer features and frills in favour of more competitive pricing. Xiaomi has, however, retained some key specifications, including the Ultra-HD screen, support for Dolby Vision HDR, and Android TV with the PatchWall and stock Android TV UIs. Is this the best affordable Ultra-HD TV you can buy right now? Find out in this review.

The Xiaomi Smart TV X Series is available in three size options, ranging from 43 inches to 55 inches. The 43-inch variant is priced at Rs. 28,999, the 50-inch variant retails for Rs. 34,999, and the 55-inch variant is priced at Rs. 39,999, as per the company’s launch pricing. At the time of this review, I spotted the 50-inch X50 variant on the company’s official online store for Rs. 31,999. All variants have the same specifications and Ultra-HD resolution, so the only significant difference between the three is the size of the display.

As mentioned, the Xiaomi Smart TV X Series skips a few features in favour of better pricing, including some elements of the design of the television. The back of the TV is quite plain to look at, and the included stands are made of plastic (unlike the metal stands included with the Mi TV 5X). However, you won’t notice any significant differences at the front of the TV, with a fairly straightforward look that has slim bezels and a fairly high screen-to-body ratio.

At the bottom is the Xiaomi logo, just above the module for the indicator light. Unlike on the Mi TV 5X, there is no hands-free Google Assistant on the Xiaomi Smart TV X50, and therefore no microphone on the TV itself or a sliding switch to mute it. The back of the TV has the ports facing the left and the bottom, with plenty of space around them to allow convenient connections, even if you have the TV wall-mounted.

The Xiaomi Smart TV X Series runs on Android TV 10, with the stock Android TV and PatchWall UIs on top

I had the TV wall-mounted for my review, and it didn’t sit too close to the wall even with a low-profile wall-mount kit, so there was enough room to access the ports as needed. The wall-mount kit isn’t included in the sales package; the Xiaomi technician can provide one at the time of installation.

The Xiaomi Smart TV X50 has a 50-inch Ultra-HD (3840×2160-pixel) LED screen with a refresh rate of 60Hz, with support for the Dolby Vision, HDR10, and HLG high dynamic range formats. Audio output from the TV’s down-firing speaker system is rated at 30W, with support for the Dolby Audio, DTS-HD, and DTS Virtual X formats. For connectivity, there is dual-band Wi-Fi and Bluetooth 5, and the TV has a quad-core processor, 2GB of RAM, and 8GB of internal storage for apps and app data, lower than the 16GB storage on the Mi TV 5X.

Xiaomi’s minimalistic remote returns on the X50 TV, albeit with minor changes. There are two new hotkeys for Disney+ Hotstar and apps in addition to Netflix and Amazon Prime Video, and the ‘Mi’ logo has been replaced by the PatchWall logo for the button that quickly switches to Xiaomi’s custom UI for its TVs. Apart from these, it’s the same familiar remote, although it does seem slightly larger than previous remotes.

The remote is powered by two AAA batteries, which are fortunately included in the sales package. Some of the software-based tweaks for the remote, introduced to cover for the lack of hardware buttons, are still in place. These include pressing the volume down key twice quickly to mute, and long-pressing the PatchWall button to access the quick settings menu.

Xiaomi’s compact and lightweight remote sees a few changes with the X50 TV, including new hotkeys

Other features on the Xiaomi Smart TV X50 include auto low-latency mode (ALLM) for gaming, Dolby Atmos passthrough when using HDMI ARC with compatible speaker systems, and access to Google Assistant using the remote. There is also built-in Google Chromecast and Miracast for casting from compatible devices.

Xiaomi’s familiar dual-UI approach based on the Android TV 10 operating system remains in place on the Smart TV X50. If you prefer the PatchWall UI, the company’s custom user interface continues to improve by way of performance, curation, recommendations from over 30 integrated streaming services, and more. There is also access to the Mi Home app directly on the TV, which is useful if you have any Xiaomi IoT products.

If you prefer the familiarity of the Android TV user interface, that’s present as well. Soon after setting up the Xiaomi Smart TV X50, the stock Android TV UI was updated to the fresher, Google TV-inspired look. Regardless of which UI you prefer, the apps are the same, including access to over 7,000 apps on the Google Play store for Android TV, to download any additional apps and games that you might want.

I did experience some issues with the UI on the Android TV interface, with the Xiaomi Smart TV X50 feeling a bit sluggish to navigate around. There were also occasions where apps would not load properly, and subtitle timing on apps such as Netflix and Disney+ Hotstar was off by a second or two. However, the fix for this was easy; a full reboot would have the TV working fine for the most part, until a few days later when the issues would reappear.

An interesting new addition to the software suite is the Xiaomi TV+ app. This allows access to linear, programmed ‘channels’ similar to what you’d find on a DTH set-top box-based service, with the obvious difference being that the content is streamed using an Internet connection.

I did find it to be a bit slow and it took quite a while to load even on my otherwise fast Internet connection, but this will hopefully improve over time. The channel selection had a fair amount of variety and content, and was a useful distraction for times when I couldn’t think of what I wanted to watch, or just wanted to watch something for a few minutes.

The Xiaomi Smart TV X Series is positioned below the Mi TV 5X in the company’s order of pricing, but this has more to do with small differences in the feature set and design of the TV. When it comes to performance, the Xiaomi Smart TV X50 is fairly adept and up to the mark for a television in its price segment, thanks to its Ultra-HD screen with support for Dolby Vision HDR, general good picture quality across different resolutions, and decent sound quality.

I watched a variety of content across resolutions and dynamic ranges, from Ultra-HD with Dolby Vision or HDR10 support, to standard definition video clips and shows on YouTube and Hotstar. While the differences in the top-quality content naturally showed, the 50-inch size of the X50 variant seemed to help hide some of the drawbacks of lower-resolution content at typical viewing distances for a living room.

Black levels weren’t very good on the Xiaomi Smart TV X50, and this showed in dark scenes on House of the Dragon

Watching episodes of Home on Apple TV+ in Ultra-HD Dolby Vision was expectedly good as compared to all other content, with the Xiaomi Smart TV X50 doing a decent job with the high dynamic range format. This didn’t seem to translate into as significant a bump in brightness as could be expected from a high-end LED or quantum-dot LED TV, but the colours and tones seemed to be better off.

The beautiful, often colourful homes and surrounding nature on Home looked about as good as can be expected on an entry-level Ultra-HD HDR TV. The naturally bright and vibrant picture of Chef’s Table: Pizza on Netflix looked particularly attractive in terms of colours and sharpness, and the gentle motion in these two shows was generally handled well by the TV.

Shows such as Andor and House of the Dragon provided a somewhat different viewing experience, which had to do with the black levels. The Xiaomi Smart TV X Series is an entry-level LED TV, and this meant that there was always a slight grey tinge across the screen.

With bright, colourful content, this didn’t matter or show too prominently, but with the aforementioned two shows relying heavily on dark, night-time scenes, this made the picture appear a bit dull and often difficult to watch unless the room was completely dark. Andor seemed to benefit from its Ultra-HD resolution and Dolby Vision support to look somewhat watchable, while the full-HD resolution of House of the Dragon looked rather strange in dark scenes, with a lot of artefacts, and colours appearing washed out.

Full-HD content on the Xiaomi Smart TV X50 looked decent, although Ultra-HD content expectedly brought out the best in the television

With HDR10 content, the TV seemed nearly as capable as with the high-quality Dolby Vision content on Apple TV+ and Netflix. The latest episode of The Grand Tour was sharp and fun to watch thanks to its primarily bright snowscapes, but the technically inferior HDR format seemed to show in the colours being slightly less impactful.

That said, the content itself will make or break the experience, and the high-quality content and footage of The Grand Tour arguably looked better than the dull Dolby Vision stream of Andor on the Xiaomi Smart TV X50. Full-HD content such as House of the Dragon and Welcome to Wrexham, despite the obvious differences in sharpness, looked decent thanks to the 50-inch screen size of the X50 variant.

Lower-resolution content such as episodes of Sarabhai vs Sarabhai on Disney+ Hotstar were similarly handled fairly well by the TV, with decent upscaling and the size of the screen itself hiding some of the weaknesses in the picture from typical living room viewing distances.

Sound quality on the Xiaomi Smart TV X Series was rather impressive given the price and size of the TV. The TV is loud, with the sound tuned well to enhance dialogue and background scores. While the sound wasn’t as impactful in the lows and background effects, it largely suited much of what I wanted to watch. At this price level, this is a particularly useful point, since users won’t need to invest in a soundbar or speaker system along with the TV.

Xiaomi’s televisions in India have always pushed the value-for-money proposition much further than the competition, and the X Series manages to fine-tune the concept even further. It’s not very different from the more expensive Mi TV 5X range in terms of core specifications, but does cut back on some features that could be considered unnecessary frills.

The result is a capable budget Ultra-HD TV that largely does the job its meant to do, and at Rs. 34,999 for the 50-inch variant (going as low as Rs. 31,999 depending on seasonal pricing), offers excellent value for money. Picture quality is decent save for some small drawbacks, sound quality is good, and the software and UI performance are acceptable on the whole. This is a sensible pick for the price, if you’re looking to upgrade to a big screen and want to explore the ever-increasing list of Ultra-HD and HDR content on offer right now.