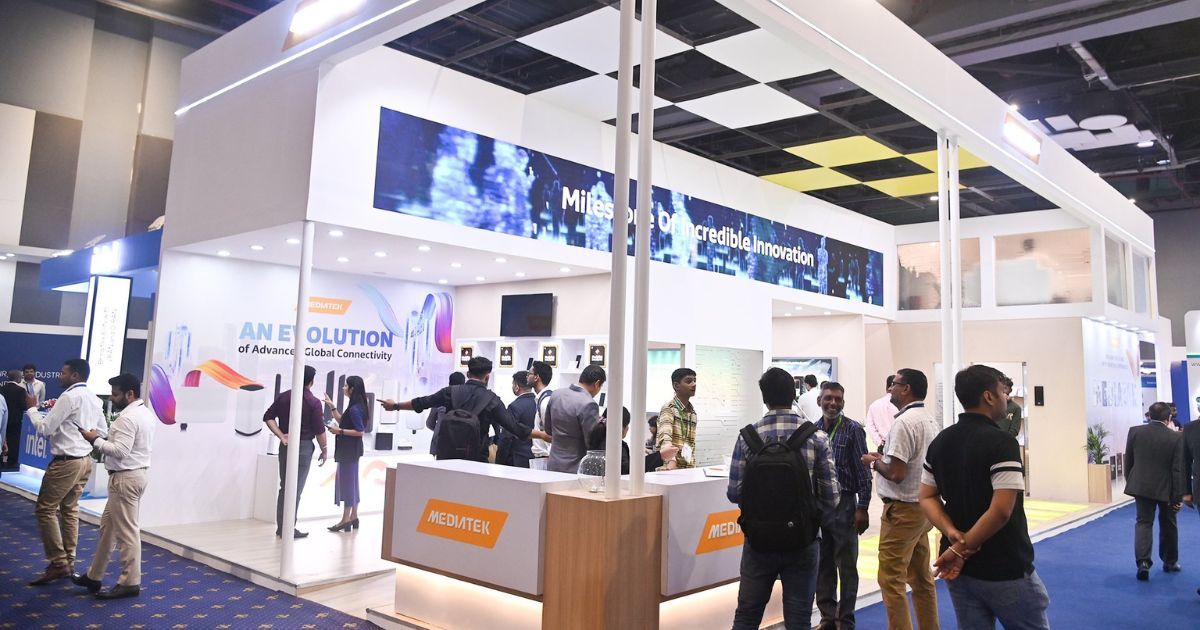 Among the biggest highlights of the recently concluded India Mobile Congress was the official launch of 5G services by Prime Minister Narendra Modi. Popular telecom operators – Airtel, Jio, and Vodafone Idea – also revealed their plans to roll out the next-gen cellular network. And when we talk about 5G, credit should also go to the companies that are working behind the scenes. Leading chipmaker MediaTek for example, has been ensuring that India is ready for 5G with its MediaTek Dimensity series offering built-in 5G modems. Today, you’ll find Dimensity-powered smartphones across various price points. The brand also showcased a lot of other products during the four-day event, which was a testament to the fact that it powers the smart gadgets in our pockets as well as around us. So even if you have missed out on attending the event, here’s a lowdown on what the MediaTek booth had to offer.

The brand dominates smartphone shipments globally as it offers a wide selection of chipsets for phonemakers. Its mobile processors fall under two categories – MediaTek Helio G series and MediaTek Dimensity 5G solutions. While the former brings high-end features to the devices that won’t break the bank, the latter leads the 5G revolution in the subcontinent from the front. And MediaTek ensured that smartphones utilising its chipsets across price points are on display.

Don’t miss out on any interesting tech updates! Join us today at #IMC2022 & witness the amazing technology behind the brands you love.

Did you know that MediaTek powers 2 billion TVs globally every year? Yes, chances are that the smart television you have at your home is powered by its chipset and you may not even be aware of it. Hence, it was great to see the company showcasing a flagship TV in its booth. The Xiaomi OLED Smart TV, as the name indicates, features an OLED panel measuring 55-inches. It’s powered by the MediaTek MT9650 octa-core SoC. and supports 4K resolution.

Of course, you can convert your existing television into a smart TV as well by using accessories like Amazon TV Stick. And MediaTek also showcased the latest and greatest Amazon TV Stick 4K Max, which provides access to OTT apps and streams 4K content.

Chromebooks and tablets that are tailor-made for remote work

With the world moving online and work or even entertainment happening anywhere and anytime, we need devices that have this on-the-go approach. Not many people are aware that MediaTek has a range of chipsets for laptops, dubbed Kompanio. During the India Mobile Congress 2022, the brand had HP Chromebook 11a and HP Kelso Chromebook x360 powered by MediaTek Kompanio 500 and Kompanio 1380, respectively.

Tablets offer the perfect bridge between a smartphone and a laptop, and MediaTek’s chips power a wide range of slates. The Realme Pad for example, is powered by MediaTek Helio G80 and is priced attractively in the mid-segment.

Showcasing its supremacy in the connectivity solutions

See you at #IndiaMobileCongress2022 as we demonstrate our high-performance solutions based on the #MediaTekT750 platform, integrated 5G modem with a Quad-core CPU Platform for Fixed Wireless Access and Mobile Hotspot CPE Devices.https://t.co/ymFQZfFdJV#PoweringTheBrandsYouLove pic.twitter.com/shg6EitYjQ

As mentioned in the beginning, MediaTek is at the forefront of the 5G revolution. Well, along with models for cellular connectivity, the company also has routers and customer premise equipment (CPE). The brand also had 5G CPEs from a slew of companies like Proscend, Quanta, and Zyxel. There were Wi-Fi routers as well on display.

We have been hearing about the Internet of Things and how IoT devices will make everything around us smarter for a while now, so it’s impressive to see a variety of such accessories in one place. The most common smart gadget would be smart speakers, and MediaTek displayed Amazon Echo Dot and the Indian company’s VVDN smart speakers. Then there’s Lenovo Smart Clock, which along with acting as a speaker, acts as a clock as well.

There were quite a few smart cameras too, including VVDN Smart Indoor Camera, Kent CamEye, and more. While the former is for home and provides surveillance functionality, the latter is meant for cars and acts as a dashcam.

Giving a platform to “Design in India” products

With Make in India continuing to get a lot of interest, MediaTek also paid attention to this aspect. It showcased a range of products that are manufactured by companies in India. These included offerings from brands like Relesys and MoMagic as well as Lava Yuva Pro among others.

By no means, this is an exhaustive list of products that MediaTek showcased during the latest India Mobile Congress. However, they do give a peek at various devices that the chipmaker powers to make our lives better. It’s evident that MediaTek isn’t just enabling devices to offer wholesome performance and capabilities inside our pocket, but making things around us smarter too.