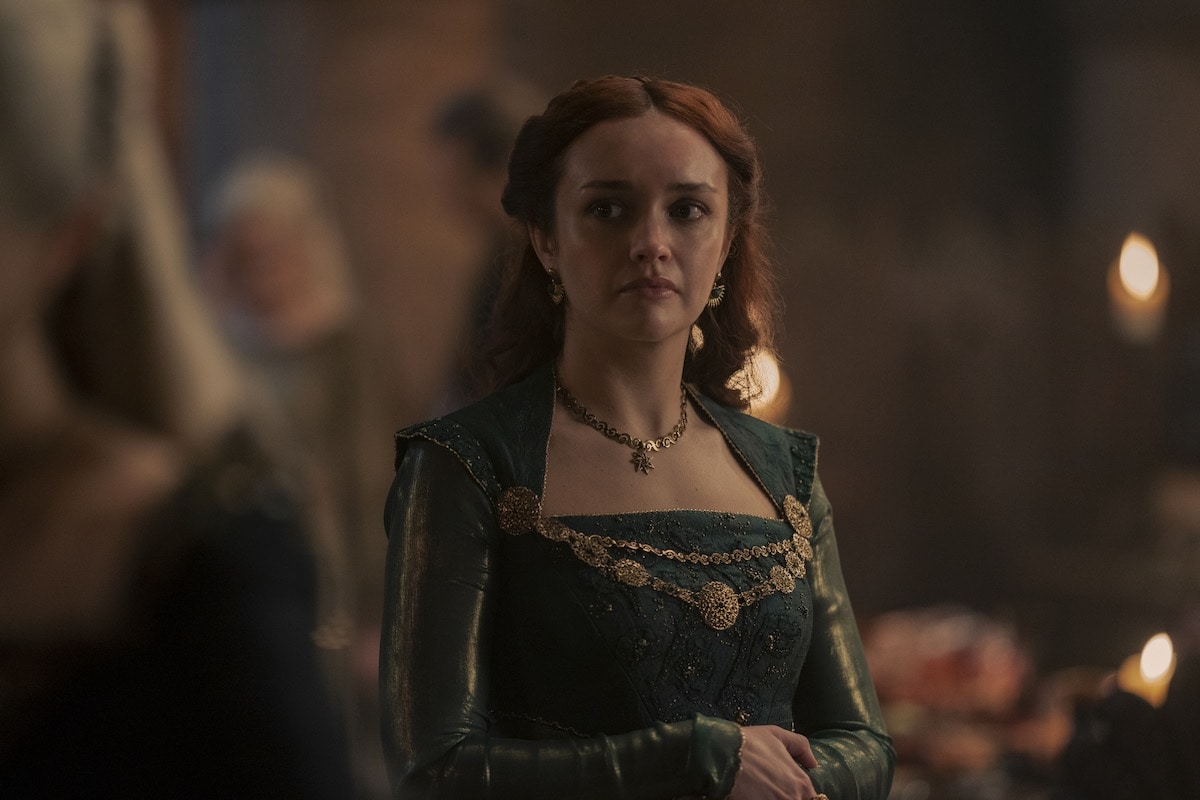 House of the Dragon episode 8 — out now on HBO Max and Disney+ Hotstar — is titled “The Lord of the Tides”. That’s because it’s largely focused on deciding who will inherit the throne of Driftmark, what with Lord Corlys “Sea Snake” Velaryon (Steve Toussaint) believed to be gravely injured. (It’s a bit weird that the Game of Thrones prequel spin-off series has essentially killed one of its main cast members entirely off-screen. Thanks, time jumps.) In some ways, House of the Dragon episode 8 could’ve been called “The Lord of the Undercurrents”. While everyone involved can feel it, nearly no one has the audacity to admit that a war is inevitable and around the corner. This is, if you can term it as such, the calm before the inevitable storm.

And what a strange tension-filled calm it is. Six years have passed since the events of House of the Dragon episode 7. King Viserys Targaryen (Paddy Considine) is a shadow of his former self. Half his face is gone, he’s more or less bedridden, and he’s surviving on the milk of the poppy — which stems the immense pain he feels. In his absence, the Hightowers are basically the new rulers: Queen Alicent Hightower (Olivia Cooke), and her Hand of the King father, Ser Otto Hightower (Rhys Ifans). And given the Velaryon household has stronger ties to wife-husband Princess Rhaenyra (Emma D’Arcy) and Prince Daemon (Matt Smith) — both were married to the Sea Snake’s children — the Hightowers are naturally not inclined to let the standard rules of inheritance apply to Driftmark.

Rather than taking things by fire and blood, as was the case in episode 7, political machinations and back dealings are the name of the game in House of the Dragon episode 8. The Hightowers have invited “petitions” that will be heard in the Red Keep, and since the scales of power tilt in their favour at this time — the Hand of the King speaks on the King’s behalf when he is indisposed — they are certain of dealing a heavy blow to Rhaenyra. Holding Driftmark gives you control over the Seven Kingdoms’ biggest fleet, after all. Add to that Alicent’s thirdborn Prince Aemond (Ewan Mitchell) winning Vhagar to their cause in episode 7, and that would make them formidable. Rhaenyra understands this too — which is why she sets off for King’s Landing at once after getting word.

Prey, House of the Dragon, and More on Disney+ Hotstar in October

Said word comes from Daemon’s daughter, Lady Baela (Bethany Antonia), at Driftmark. (Baela has become a ward of her grandmother in the years since episode 7.) House of the Dragon episode 8 opens there, with Sea Snake’s younger brother, Ser Vaemond Velaryon (Wil Johnson), making his case for why he should be the new lord of Driftmark should Corlys not make it. I have to admit, I had to look his name up. Vaemond has barely been in the show — this is partly a problem of jumping years, with characters not getting enough screen time — and suddenly, he’s front and centre, vying for a powerful seat. Like, who are you? Princess Rhaenys Targaryen (Eve Best) warns her brother-in-law that his words are treason, but Vaemond is secure in the knowledge that it’s the Queen who rules these days.

Alicent is so busy doing the ruling that she doesn’t even have time to greet her guests, Rhaenyra and Daemon. Though that is the more charitable version. The two childhood best friends don’t see eye to eye anymore — and things ended very badly last time around. In fact, when they are reunited on House of the Dragon episode 8, Alicent’s eyes drift towards Rhaenyra’s left arm, where the scar has healed but remains visible. Rather than being a moment of concession, the reunion ends up being spicy, with accusations levelled back and forth. Given the state of her king father, Rhaenyra feels the Hightowers are occupying the Iron Throne with no legitimacy. She’s the heir after all. Alicent protests that Viserys is guiding them from his bed. Who do you choose to believe?

Daemon’s chuckle at that moment in House of the Dragon episode 8 says it all. After all, it’s clear who’s actually calling the shots. The decision Alicent — with guidance from her father, Otto — makes here is essentially a reflection on the bigger picture. If you overlook a son’s right to inheritance (in this case, Prince Lucerys, Rhaenyra’s son and the Sea Snake’s grandson in name if not blood) because you want someone who’s in your favour (in this case, Vaemond the guy who’s barely been in the show), you’re setting a dangerous precedent. Sure, you’re helping your own cause down the line — Rhaenyra the chosen heir vs Alicent’s firstborn Aegon — but it also opens you up to questioning and suspicion from other lords in the future.

The Rings of Power Season 2 Has Begun Filming in the UK: Report

For Rhaenyra, the petitions are a deep affront. The Targaryen Princess sees this as a questioning of her own legitimacy to claim the Iron Throne — if her children are overlooked for the Driftmark seat, what does that say about who wields ultimate power? At night, Rhaenyra visits her ailing father once more, half praying to the gods to give him strength to oversee the proceedings. But in the morning, as the petitions are heard in the Great Hall, there’s no sign of Viserys. Instead, it’s Otto who sits on the Iron Throne. As Vaemond Velaryon make his case in House of the Dragon episode 8, Rhaenyra is visibly frustrated. She might be the heir to the Iron Throne, but in the moment, she’s utterly powerless.

Then, the mood in the Great Hall shifts entirely as the doors open. In walks Viserys — clutching onto a cane, the King of the Seven Kingdoms slowly makes his way to the Iron Throne. Otto, Alicent, and Vaemond exchange glances, knowing this is going to spill cold water on their plans. Viserys’ frailty is clear for all to see in House of the Dragon episode 8, and he can barely keep the crown on his head, but once he makes it to the other end of the room, it’s clear that only one man’s voice matters now. The King notes that since Corlys is out injured, the best person to speak on his behalf would be his wife, Rhaenys.

Instead of making a case for herself as she had suggested earlier, Rhaenys publicly agrees to the marriage proposals set out by Rhaenyra in private earlier in the episode. It’s smart. Instead of undermining herself in front of Viserys who’s all by the book, The Queen Who Never Was shows that she knows how to play the game of thrones. However, her brother-in-law Vaemond isn’t having it. He goes on a rampage, calls Rhaenyra the W-word and her children the B-word. Forget the insults; this is treasonous, especially given how Viserys reacted in House of the Dragon episode 7. As you might expect, the King gets up and demands Velaryon’s tongue. But Daemon is two steps ahead, as he beheads Vaemond from behind. And just like that, the guy we barely knew is gone.

That night over dinner, the ailing Viserys does his best to bridge the differences between his wife and his daughter. (House of the Dragon episode 8 sets this scene up with a nice shot of the literal gulf between the Queen and the heir — which is appropriately filled by the King.) And for a while, his words work. Rhaenyra and Alicent acknowledge each others’ efforts. Even Rhaenyra’s children get in on the act, doing their best to say something nice about their uncles, Alicent’s boys. Satisfied with what he’s seeing, Viserys asks for music, which leads to a dance between one of Rhaenyra’s boys and Alicent’s only girl. It’s a brief hint of a union between the two warring factions. As he’s carried away owing to his pain, the King thinks he’s done his duty.

But, obviously, that was all an act. Alicent’s boys are naturally more bitter, given Rhaenyra and her family will sit on all the thrones. Having previously mocked them over their marriages, Aemond — the boy who became Vhagar’s new dragonrider in House of the Dragon episode 7 — makes a final speech. He chooses his words cleverly, calling Rhaenyra’s boys “strong” while implying something else entirely. As the children begin to fight, they are separated and sent to their chambers. Rhaenyra then tells Alicent that they will leave for Dragonstone in the morning — she got what she came for — even though they only just arrived.

As Alicent attends to her king husband after the contentious dinner, Viserys starts to babble about the “song of ice and fire”. He’s talking about the dream that Aegon the Conqueror had — a vision about a long night when invaders will arrive from the North — whose details have been passed down generation to generation, from one Targaryen ruler to the next. But the Queen misunderstands him, thinking he’s talking about their son Aegon (II) as the “prince that was promised” and the “one to unite the realm.” It’s clear that Alicent is going to use those words to establish her son’s credentials later. Rhaenyra might have heard the full thing (when Viserys was sober and in his senses), but it’s her word against Alicent’s now.

And with the King breathing his last in House of the Dragon episode 8, the brittle peace he struggled to maintain looks set to vanish any second.

House of the Dragon episode 8 is now streaming on Disney+ Hotstar in India, and HBO Max wherever available. New episodes release every Monday at 6:30am IST/ Sunday at 9pm ET.