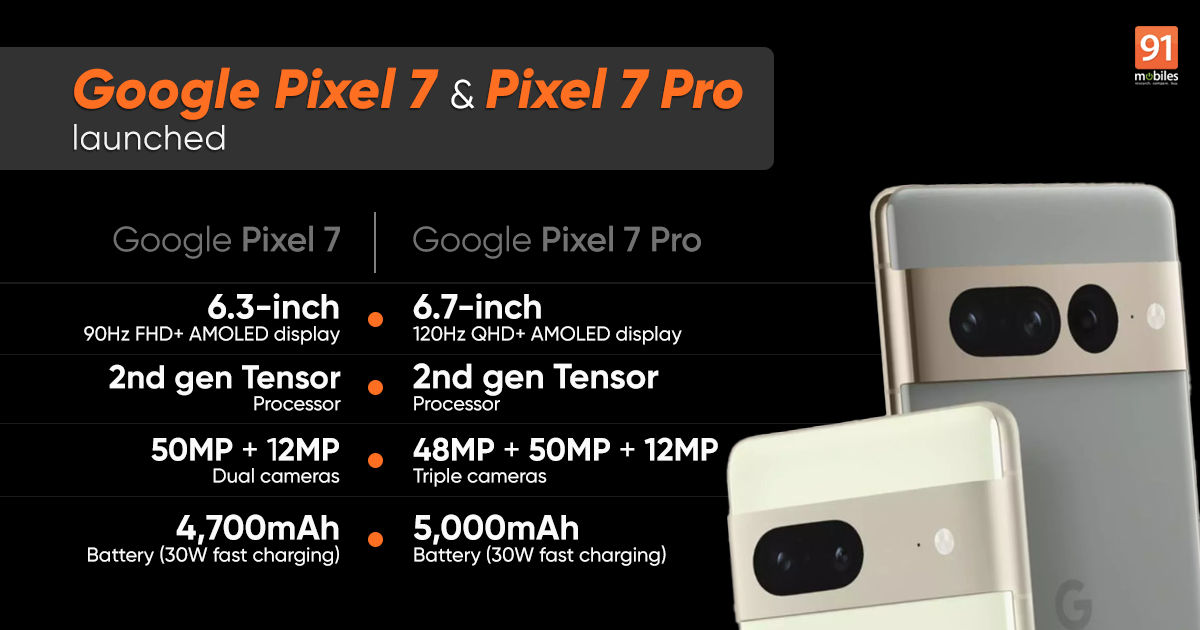 The Google Pixel 7 and Pixel 7 Pro specifications include the new Tensor G2 processor, a 50MP primary snapper, and up to 6.7-inch QHD+ display.

Google Pixel 7 price in India is set at Rs 59,999 for the 8GB + 128GB model. The phone comes in Snow, Obsidian, and Lemongrass colour options.

The Pixel 7 phones will be on sale via Flipkart in India and customers can pre-order them starting tonight i.e. October 6th at 8:15 PM. Pre-order offers to include the Fitbit Inspire 2 at Rs 4,999 and free screen protection.

Google Pixel 7 flaunts a 6.3-inch FHD+ AMOLED display with a 90Hz refresh rate and a punch-hole cutout for the selfie snapper. The phone has symmetrical bezels around the screen and sharp edges, which might hurt on extended use. Powering the Pixel 7 is the second-generation Google Tensor G2 chipset coupled with 8GB RAM and 128GB/256GB storage. The phone runs on Android 13 OS out of the box with a promise of 5 years of security updates.

Connectivity options include 5G, 4G LTE, Bluetooth, GPS, and USB Type-C port for charging and data sync. There is a 4,700mAh battery with 30W fast charging support. It is equipped with a Titan Security Chip, an in-display fingerprint sensor for security, and wireless charging.

The Pixel 7 has a dual rear camera setup, with a 50MP primary sensor and a 12MP ultra-wide-angle lens. There is an 11MP snapper on the front for selfies and video chats. The phone features high-resolution 8x zoom, real-tone, and Movie Motion Blur.

The Pixel 7 Pro, on the other hand, has a large 6.7-inch LTPO QHD+ display with a punch-hole cutout for the selfie shooter and up to 120Hz refresh rate. It is powered by the Tensor G2 chipset paired with 12GB RAM and 128GB/256GB storage. The phone runs on Android 13 OS out of the box and should get timely updates.

In terms of optics, the Google Pixel 7 Pro has triple rear cameras on the back, with a 48MP telephoto lens with 5x optical zoom and LDAF, a 50MP primary wide-angle shooter, and a 12MP ultra-wide angle lens. Up front, the Pixel 7 Pro will also have the same 11MP selfie snapper. The phone supports 4K video recording.