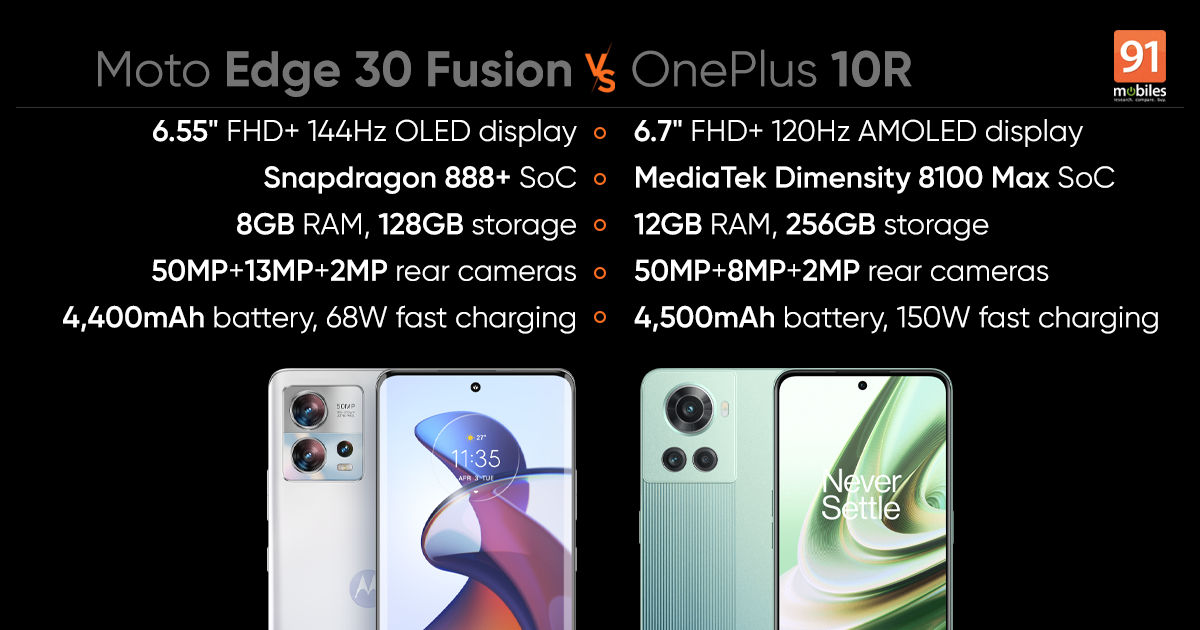 Motorola India took the wraps off its latest smartphones, the Moto Edge 30 Ultra and Moto Edge 30 Fusion, in India earlier this week, on Tuesday. The latter entered an increasingly competitive sector, which also saw the launch of a fellow premium smartphone, the OnePlus 10R, in April this year. With these two smartphones going head to head, users have an interesting range of devices to choose from — in the premium segment of smartphones priced at around Rs 40,000. On this note, here’s looking at how the Moto Edge 30 Fusion fares against the OnePlus 10R, at least on paper.

The Moto Edge 30 Fusion is priced at Rs 42,999 in India, but for an introductory period, will be sold at Rs 39,999. It will also have applicable bank offers for SBI Card and Axis Bank users, which can potentially bring down the price of the smartphone to Rs 36,999 when it goes on sale from Thursday, September 22.

Moto Edge 30 Fusion vs OnePlus 10R: where to buy them

The Moto Edge 30 Fusion looks similar to the Edge 30 Ultra, and features a curved edge design that typically personifies a premium smartphone. The curved display gives it very narrow edges, while the rear comes with a textured finish that is also tapered inward to ensure that the grip is not compromised. The bezels are impressively narrow on this one, and the rear camera module to the top of the back panel features two vertically stacked camera lenses, and a smaller ancillary lens. The smartphone measures 7.7mm in thickness, and weighs 168 grams — making it among the slimmest and narrowest phones in this segment.

The OnePlus 10R, meanwhile, features sizeable flat edges, which is akin to the Android smartphone design that its sibling brand, Oppo, has been offering on phones of late. Unlike the curve-based design of the Edge 30 Fusion, the OnePlus 10R looks edgier and sharper. The rear camera module is fused to the edges, and features a single large lens above two horizontally placed smaller lenses. The smartphone is thicker and heavier than its Moto rival — measuring 8.2mm in thickness and weighing 186 grams.

The Moto Edge 30 Fusion features a 6.55-inch OLED display, thereby giving it a truly premium feature since OLED panels are typically reserved for only the top products of a lineup. The display offers 144Hz refresh rate, thus giving it super smooth touch response and visuals. It also gets dual curved edges, thus adding a design and edge utility element as well.

In comparison, the OnePlus 10R features a larger display that measures 6.7 inches in size, but uses an AMOLED panel that is nearly as good as OLED ones at contrast levels and depth. The display offers 120Hz refresh rate, which is more mainstream than the higher refresh rate of the Edge 30 Fusion.

The Moto Edge 30 Fusion runs on an older generation flagship chip — the Snapdragon 888 Plus from Qualcomm. The latter offers flagship grade performance even now, and is therefore in line with what you would expect from a premium smartphone. This, however, is paired with only one storage variant — offering 8GB memory and 128GB of internal storage. There is also no expandable storage slot, so 128GB storage is all that you get here.

In comparison, the OnePlus 10R is powered by the MediaTek Dimensity 8100 Max Soc — which is nearly in line with the Snapdragon 888 Plus on the Edge 30 Fusion. However, the latter does offer better graphics performance as per public benchmark data, even if the Dimensity 8100 Max beats it on the efficiency charts. The OnePlus 10R also gives users the option to select up to 12GB memory and 256GB internal storage, hence adding versatility.

The Moto Edge 30 Fusion features a 50MP primary rear camera, which is paired with optical stabilisation, and an f/1.8 lens. The additional units offer a 13MP sensor for the ultra-wide lens, and a 2MP depth unit. The camera setup can record both 8K and 4K videos at 30fps, and full HD videos at 120fps. To the front, it gets a 32MP camera with 4K selfie video recording.

The OnePlus 10R, meanwhile, gets a fairly similar setup as well. It also gets a 50MP primary rear camera with optical image stabilisation and f/1.8 lens, along with an 8MP ultrawide camera and a 2MP depth unit. This setup cannot record 8K videos, but other video credentials remain the same. This, however, is likely due to a software restriction, and not hardware. To the front, it gets a 16MP selfie camera that can shoot full HD front-facing videos.

The Moto Edge 30 Fusion does not feature a 3.5mm audio port, but comes with Wi-Fi 6e and Bluetooth 5.2 for wireless connectivity. It has 5G connectivity, as well as a USB-C 3.1 port for charging and wired connectivity. It also gets an under-display optical fingerprint sensor, for biometric security.

Powering the Edge 30 Fusion is a 4,400mAh battery with 68W fast charging, which is advertised to offer 50 percent power to the smartphone in 10 minutes of charging time.