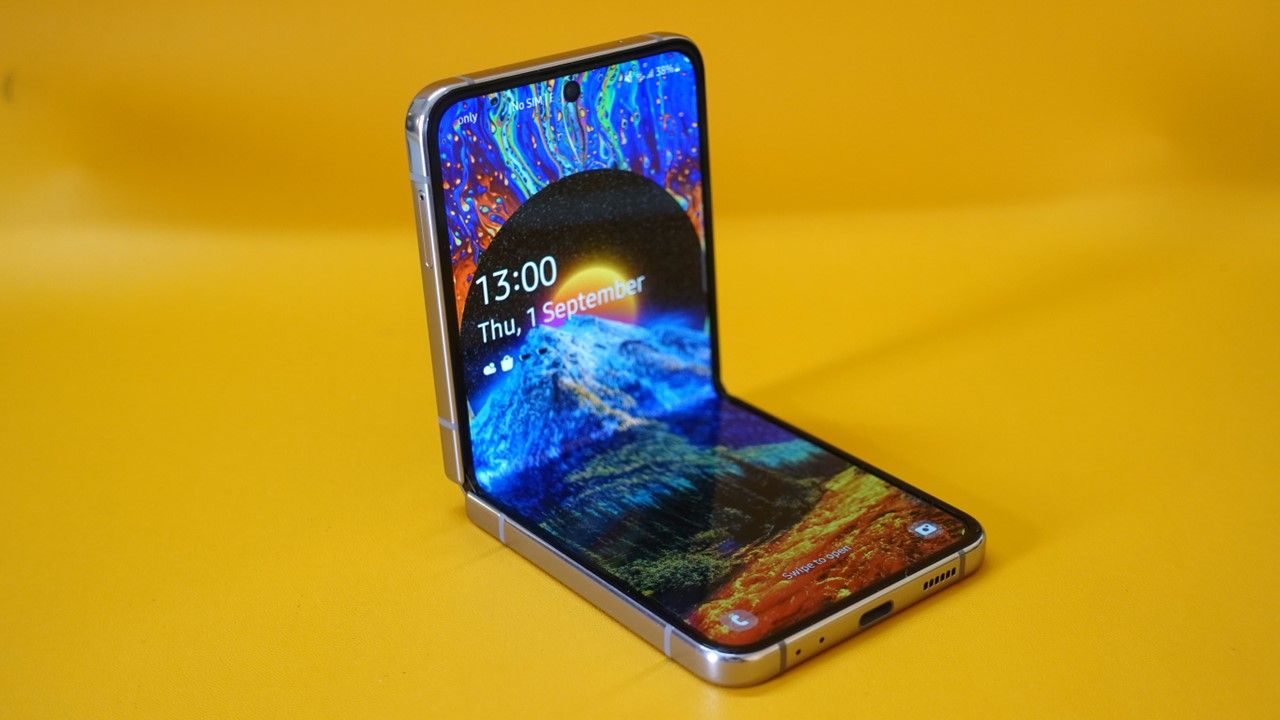 The Samsung Galaxy Z Flip 4 brings back the fun of using phones and the generational improvements only make this foldable much more usable as a smartphone. The iconic clamshell design makes Flip 4 a compact phone but don’t let its unique form-factor fool you into believing that it compromises its usability. If anything, the Flip 4 is as good a flagship phone as they make their Galaxy S22 (review) and it anyway has the powerful Snapdragon 8+ Gen 1 processor, so performance wise it’s solid. It’s often said in the consumer tech world that smartphone innovation comes at a price and in the case of the Flip 4, it’s priced almost 5K more than the Flip 3 (review) was at launch. In fact, Samsung didn’t reduce the price of the Flip 3 in India as it continues to sell starting at ₹84,999 which makes things even more interesting. So if you already own a Flip 3, spoiler alert, you don’t need to upgrade to the Flip 4 just yet but if you’re someone looking to buy a foldable phone and here’s how it is living with a smart clamshell phone.

Inside the retail box of the Samsung Galaxy Z Flip 4, you get the Flip 4, a Type-C to Type-C cable and a SIM Ejector pin along with some documentation. You will need to purchase a 25W charging adapter separately which costs ₹1299. 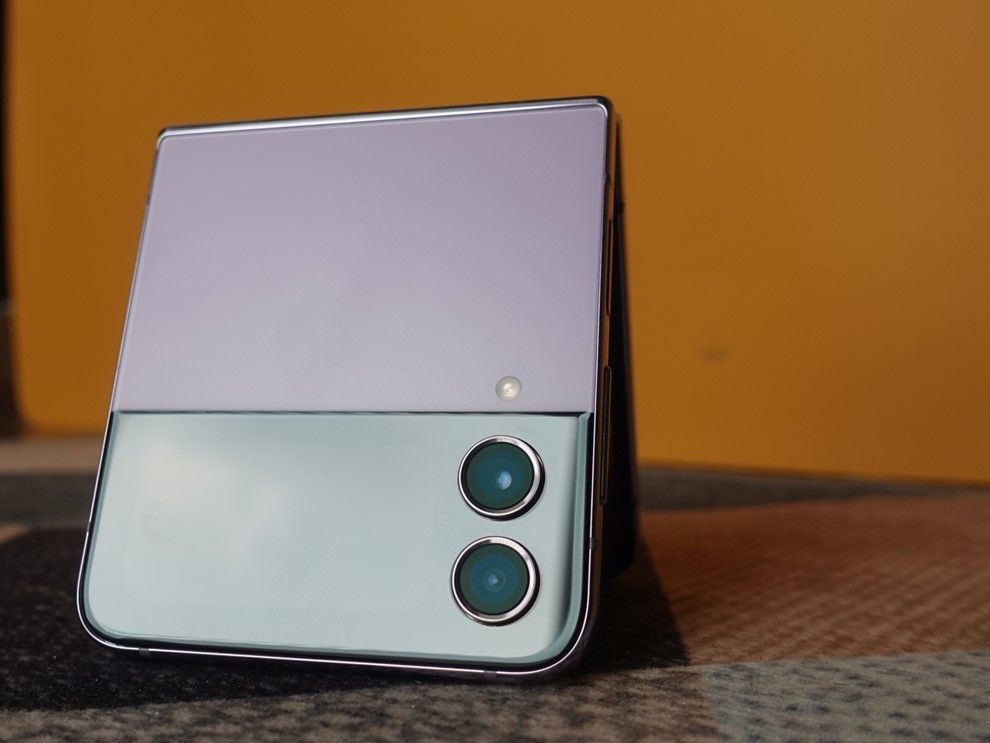 Samsung has almost perfected the foldable clamshell design and the Flip 4 is a testament to this fact. It has a great in-hand feel, is extremely pocketable and has a reinforced armour aluminium design along with an IPX8 rating which makes it withstand daily wear and tear. This foldable form factor is eye-catching and stunning making it a delight to hold its matte and glossy design. The hinge design is solid and even after repeated flipping and opening it up in my use, it remains durable and flawless. If you’re worried about whether this novelty factor wears off, it really doesn’t and in fact, you will appreciate its flipping nature in a greater way. 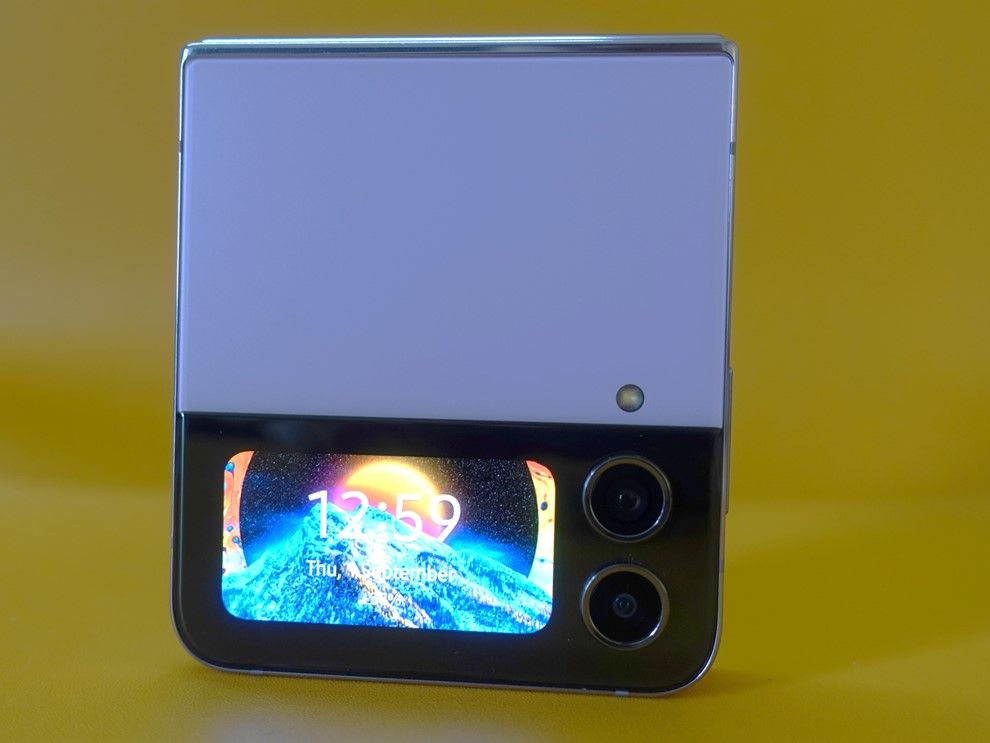 The Flip 4 has a slimmer hinge mechanism than the Flip 3 which allowed Samsung engineers to trim the bezels even further and make it more compact in the process. In comparison, the width has shrunk by 0.3mm while the length of the frame has reduced by 0.8mm (unfolded) and 1.5mm (folded). On the flip side, Flip 4 is 4 grams heavier than Flip 3. While these are marginal differences, the fact remains that the Flip 4 isn’t fragile and is now ready to face any challenges on a daily basis. The USP of the phone, its foldable nature, makes it fun to use but more importantly it doesn’t make it any less than a regular candy bar flagship phone in the market right now which should attract more users to try it out. 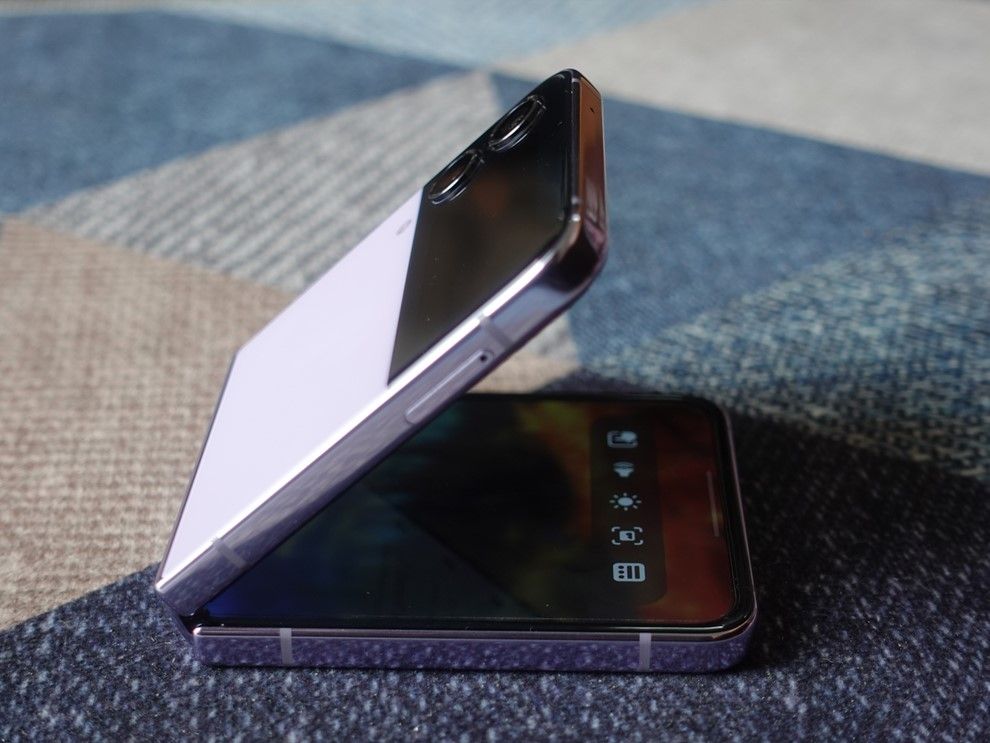 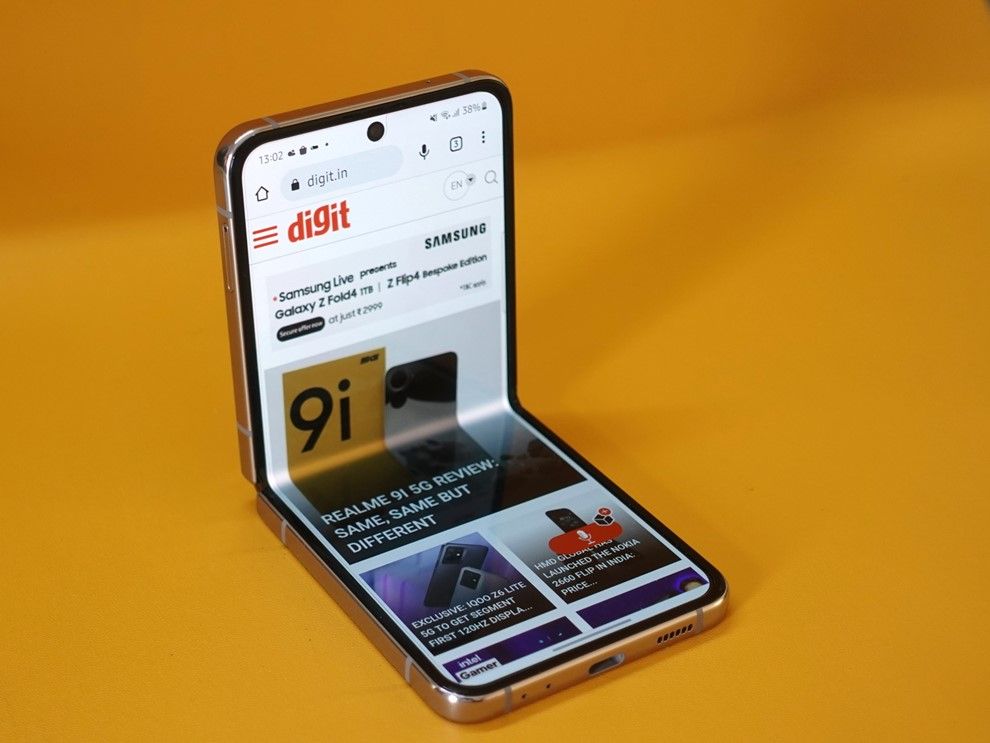 The Flip 4 has the same display as the Flip 3 and it’s a great bright screen that offers a great viewing experience. The only difference between the display of both phones is that on the Flip 4 you get Gorilla Glass Victus+ protection on the Cover screen. However, a downside to being a foldable display is that it leaves behind a crease which you will have to live with at all times. There’s a bit of a learning curve when your scrolling finger hits a groove in the middle of the screen. It’s not very prominent and rarely hampers the viewing experience yet it’s a constant reminder of the phone’s dual nature. 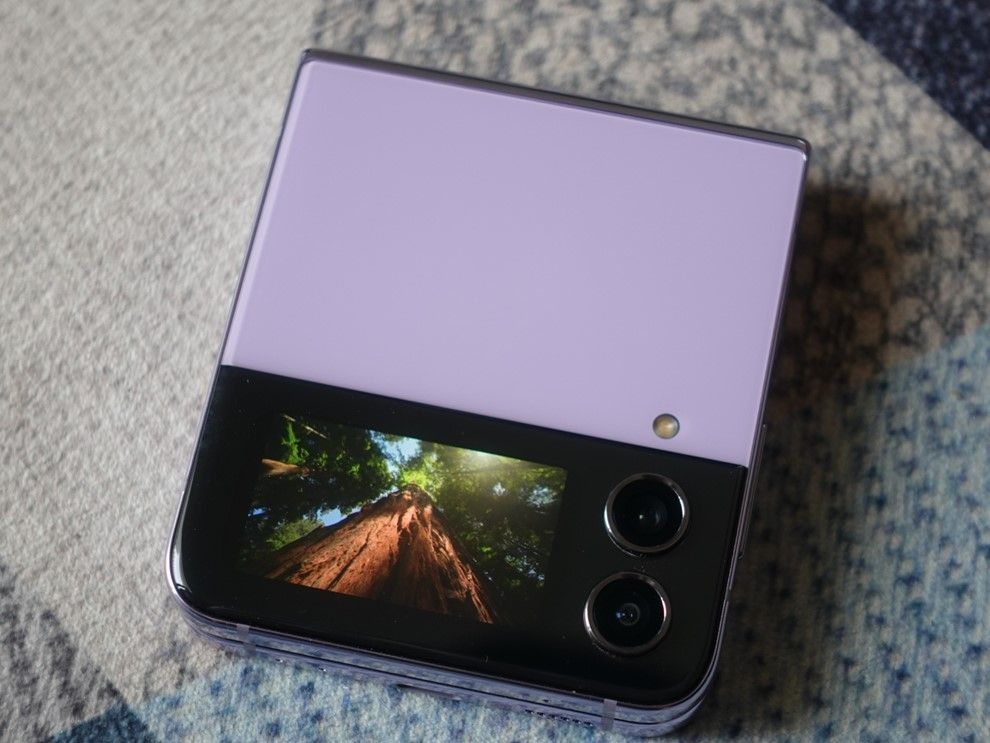 Samsung has arguably put its best folding display on the Flip 4 which lets you watch movies and shows in all of its vibrant, HDR goodness. The adaptive refresh rate keeps every interaction smooth and handles animations and transitions with ease. In our tests, the main display offered 1243 nits of maximum brightness (high brightness mode) and 769 nits of typical brightness. Meanwhile, the secondary Cover display offers 1787 nits of total brightness and users can customize this screen to their liking with widgets and custom backgrounds, but that remains the extent of its functionality. 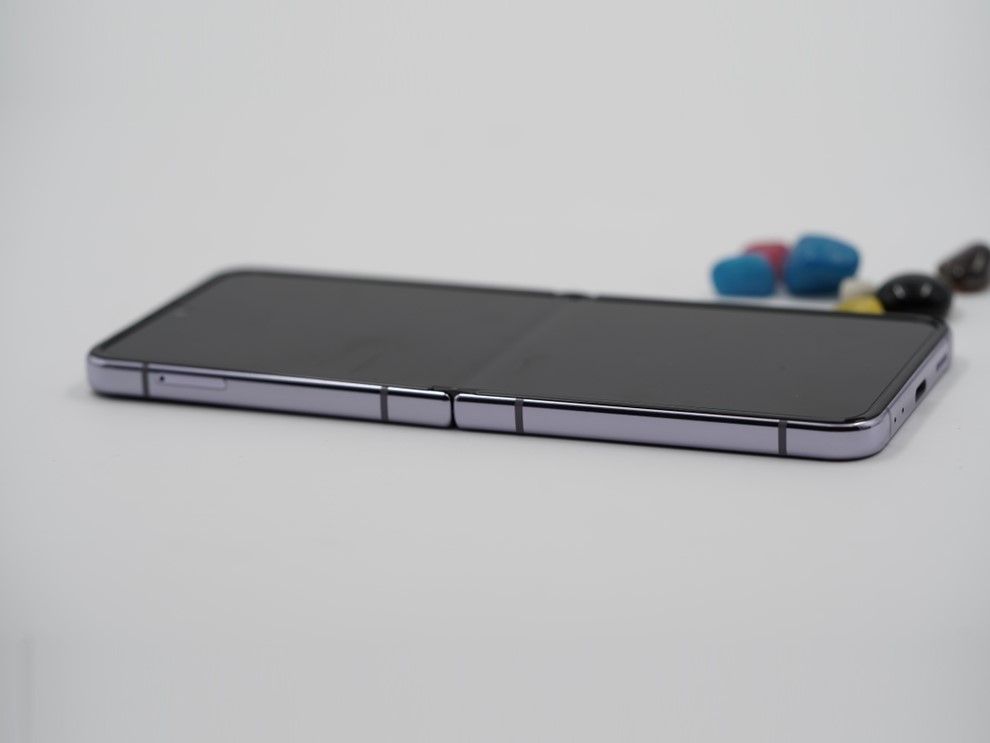 The Flip 4 offers snappy performance in daily use and there’s virtually nothing that it can’t run or does any differently than a regular smartphone. It scores highly on all of our testing benchmarks such as AnTuTu, Geekbench, PCMark, 3DMark and GFXBench. However, the CPU throttling test is where the chinks in Flip 4’s armour surfaced and it throttled by 69% of its maximum performance. Samsung could be throttling the CPU to keep the thermals in check because intensive tasks do make the Flip 4 warm to the touch. Then again, it runs heavy games like COD Mobile and Asphalt 9 without breaking a sweat. Gamebench clocked in 59 FPS and 60 FPS for both these games at 100% and 92% respectively. 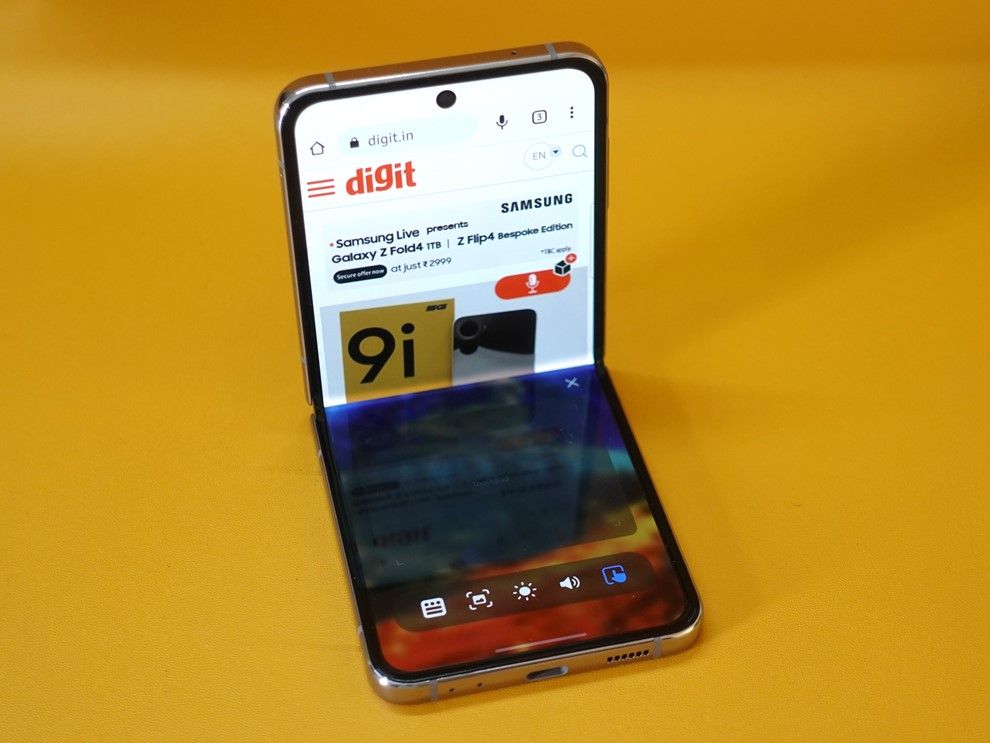 Owing to its unique design, the One UI offers something Samsung calls the Flex mode panel. It requires the Flip 4 to be positioned upright and accordingly the apps will transition to the top half of the screen. The lower half will have additional controls to help you go about the different apps. My favourite one is the trackpad which brings an on-screen cursor to help control the app, making it look like a miniature laptop! Apart from Samsung’s default apps like Gallery, Camera and Calendar, supported apps also include Chrome, Instagram, Meet and YouTube, to name a few. Samsung has partnered with Meta to give options for hands-free controls on WhatsApp, Facebook and Instagram.

The Cover display offers limited functionality but it’s practical enough given the screen size. You can make and receive calls (loudspeaker), check notifications and send preset replies, control music playback, use it as a selfie preview screen and much more. A larger screen here could increase the usage of the outer screen when the phone is folded. For now, there’s the Cover Screen OS app on the Play Store which lets you use the Flip 4’s Cover display as a normal phone screen with any app on it, even YouTube.

The Galaxy Z Flip 4 is equipped with a slightly larger battery than the Flip 3. This means an extended battery life which is always great. If you are a heavy user, you will be able to get around 5-6 hours of screen time which is great but you will have to plug it in at the end of the day. In our video loop test, Flip 4 lasted for 14 hours and 10 minutes which is a great score. The Flip 4 supports fast charging and Samsung’s 25W adapter takes anywhere from 1-1.5 hours to fully charge the battery. 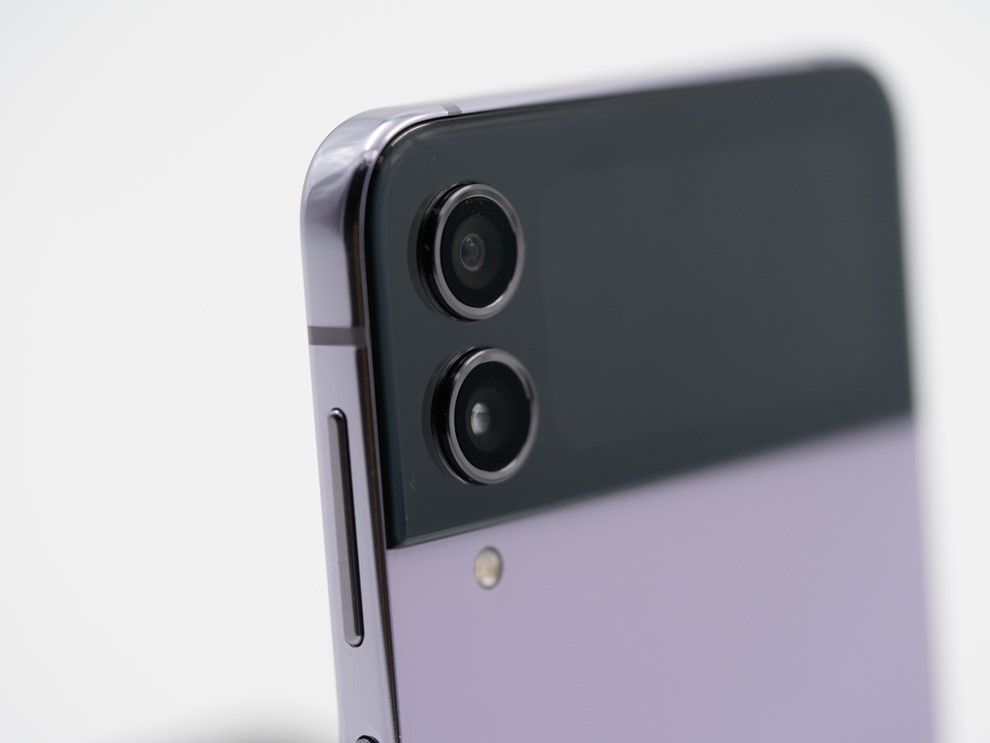 The Flip 4 also gets a new primary camera sensor, although it’s still 12MP, the performance places this foldable phone right up there with the likes of the iPhone 13 (review) and Vivo X80 Pro (review). The secondary ultra-wide camera and the selfie camera are the same as on the Flip 3. The main camera is capable of producing stunning images in daylight with a great many details and colours. HDR processing is balanced and in typical Samsung fashion, the pictures are Instagrammable out-of-the-box. The ultra-wide camera also makes good and detailed wide-angle pictures though there remains some barrel distortion at the corners. Largely though, the pictures came out to be great and the same goes true for the video recording. The selfie camera is decent and will be enough for most users. The camera app also lets you place the phone in an upright position for more stability or for taking a group picture from the main camera, which is pretty neat. 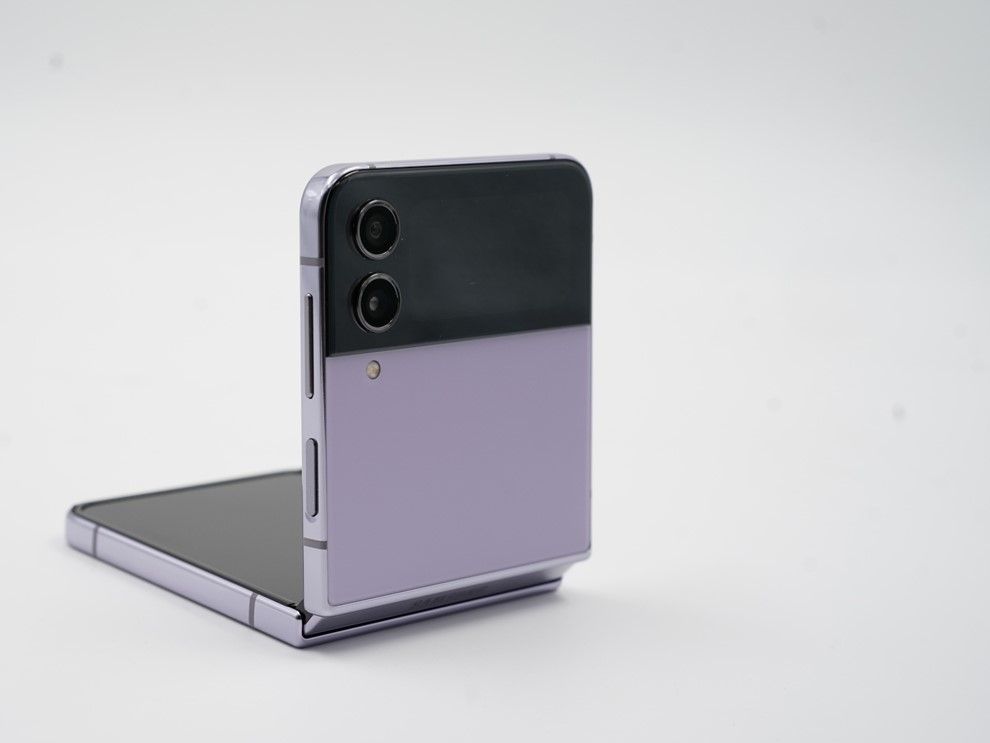 The Samsung Galaxy Z Flip 4 brings generational improvements which make it more usable as a smartphone than before. Its uniquely designed hinge allows you to flip it open (still need both hands) giving you a beautiful large screen with a great viewing experience accompanied by loud stereo speakers. The day-to-day performance of the Flip 4 is ever so smooth and the cameras make it a dream come true for many creators who love to take pictures and videos. The Flip 4 is an experiential phone, something eccentric that will be appreciated by those who love compact form-factor or just a differently designed phone that’s as power packed as any flagship phone. Now that the Flip 4 is here, I expect Samsung to double down its efforts into making foldable accessible to more people than before by giving a price cut to the Flip 3 as it has done in other markets.