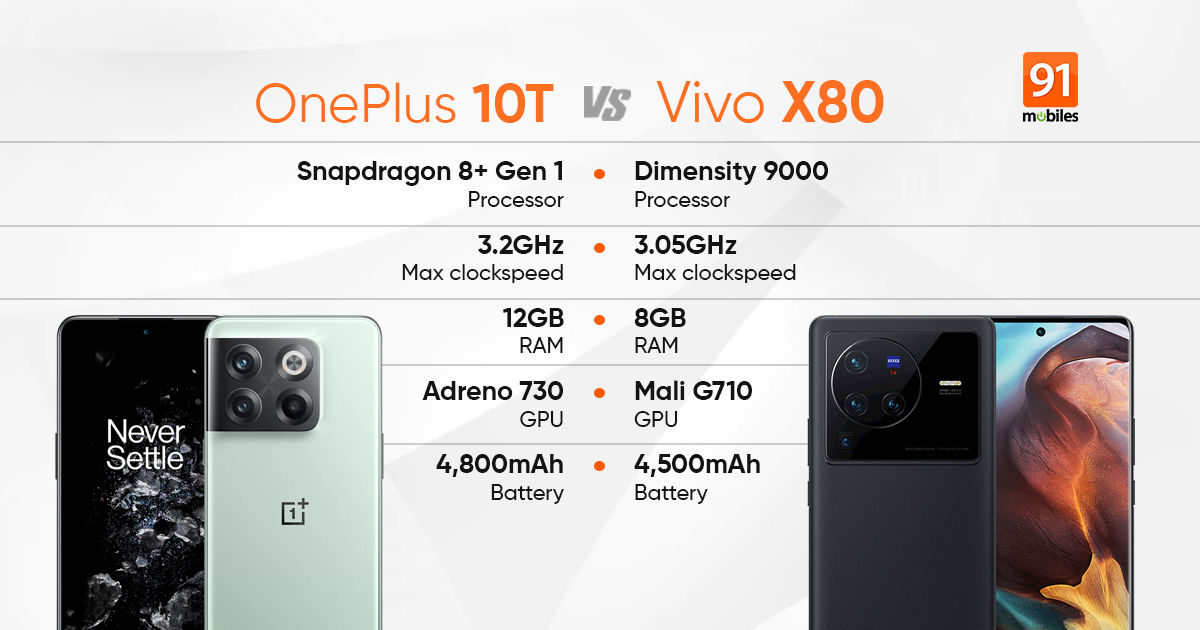 The OnePlus 10T, which has been announced for a starting price of Rs 49,999, is only the third phone in the Indian market to come with the Qualcomm Snapdragon 8+ Gen 1 SoC. For the uninitated, the chipset is the fastest silicone from the American chipmaker’s stables yet. Be that as it may, there is a lot to be said about the SoC’s performance vis-a-vis MediaTek’s flagship Dimensity 9000 platform too. So, today, I will be pitting the OnePlus 10T and the Dimensity 9000-backed Vivo X80 (review) through a series of benchmarking and gaming tests to see which platform offers better performance. 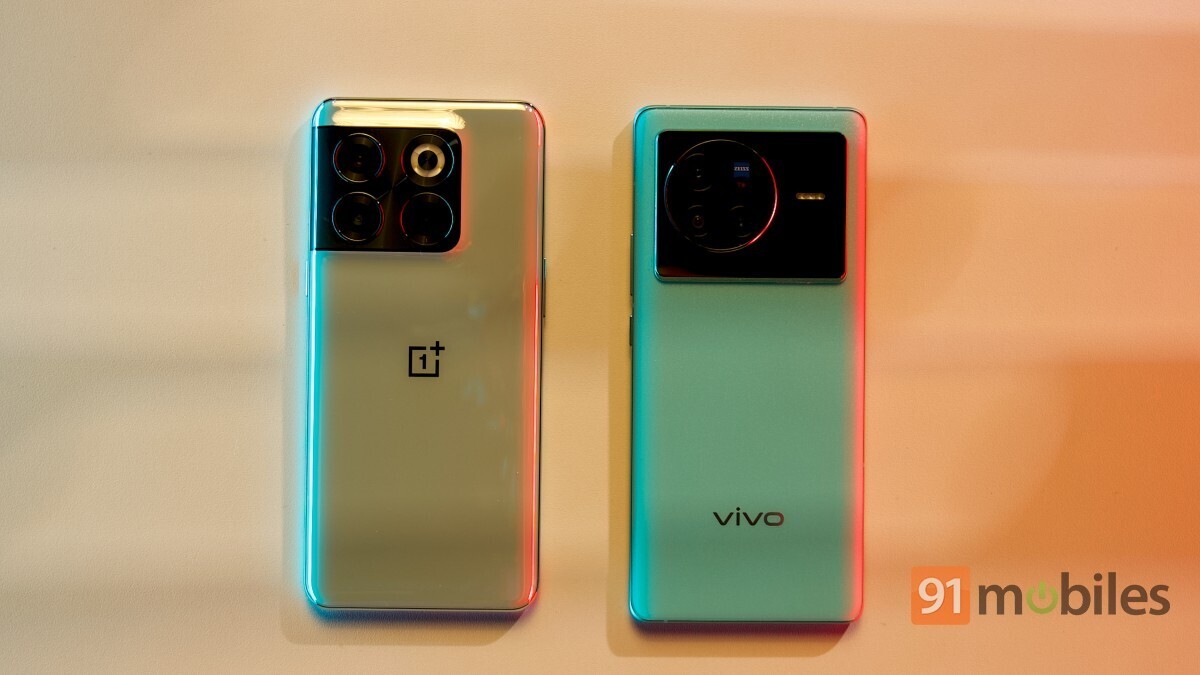 First and foremost, let’s take a look at the components that comprise each of the two SoCs. Starting with Qualcomm’s offering, the octa-core Snapdragon 8+ Gen 1 consists of a Cortex X2 super core that is clocked at 3.2GHz. The super core is assisted by three Cortex A710 cores spinning at 2.75GHz, and the quad-cluster works in tandem for high-performance tasks. The four efficiency cores are made up of Cortex A510 CPUs which are clocked at 2.0GHz. As for graphics, the chipset ships with the Adreno 730 GPU which revs at 900MHz. As for the Dimensity 9000 platform, the SoC is also backed by a Cortex X2 super core which is capped at 3.05GHz. On the flip side, the supplementary Cortex A710 CPUs spin slightly quicker at 2.85GHz. Finally, the Cortex A510 cores have also been clocked a tad lower at 1.8GHz compared to their Qualcomm counterparts. On the graphics front, the SoC ships with a Mali G710 GPU operating at 850MHz. Do note that I had enabled the high-performance mode on the duo for the best possible results.

In GeekBench 5, the OnePlus 10T is able to churn out 3,760 and 1,303 multi-core and single-core points respectively. The Vivo X80, on the other hand, overturns more or less the same results and the device net 4,286 and 1,252 points respectively. It makes sense for the 8+ Gen 1, which powers the OnePlus 10T, to have a slightly higher single-core score since its Cortex X2 core is clocked a bit higher than the one on the Dimensity 9000 SoC. That said, MediaTek has clocked its high-performance Cortex A710 cores a smidge higher, thereby giving the chipset an edge in the multi-core test run. Taking the results into account, the OnePlus 10T is about 13 percent slower for multi-core tasks when pit against the Vivo X80.

Antutu is a much more comprehensive benchmark that takes into account the phone’s GPU, UI, and memory to calculate an overall score. Apart from that, you also get stats about the device’s battery loss and temperature gains during the test run. Here, the OnePlus 10T yielded an overall score of 1,017,039 points, making it only the second phone in our testing (after the iQOO 9T) to surpass the one million points tally. However, the Vivo X80 is hot on the competition’s heel with a score of 994,292 points. As a measure of percentage, the OnePlus 10T edges in front of the Vivo X80 by just three percent in the Antutu benchmark.

The Snapdragon 8 Gen 1 chipset was plagued by throttling issues and the SoC could rarely sustain its peak performance under load. Thankfully, Qualcomm has worked upon the 8 Gen 1’s throttling woes and the newer 8+ Gen 1 chipset fared much better in our testing too. In fact, after a 30-minute run, both the OnePlus 10T and the Vivo X80 maintained 78 percent of their peak performance as per the CPU Throttle benchmark. The result is a huge improvement over the 8 Gen 1 platform which, for the uninitated, throttled to around 61 percent in the same test. You can read up more about the same here, but so far, the 8+ Gen 1 SoC is neck and neck with MediaTek’s Dimensity 9000 platform.

Interestingly, both the phones ship with 256GB of UFS 3.1 storage, which is currently the fastest storage standard deployed in smartphones. Nonetheless, I ran the Cross Platform Disk benchmark to test the duo’s sequential read and write speeds and got eerily similar results the phones. To wit, the OnePlus 10T overturns sequential write and read speeds of 641.4MB/s and 1.1GB/s respectively, whereas the Vivo X80 nets 650MB/s and 1GB/s respectively.

3DMark’s Wild Life Extreme Stress test gauges a smartphone’s GPU performance under load. Here, the OnePlus 10T churned out a stability score of 93.7 percent. The Vivo X80, on the other hand, trumped OnePlus’ score by yielding 98.6 percent stability in the test run. Consequently, it’s safe to say that the X80 can handle graphically demanding workload for extended periods slightly better than the OnePlus 10T. I should also point out that the OnePlus 10T lost 15 percent battery and the smartphone’s core temps rose about 15 degrees during the benchmark’s run. In contrast, the X80’s battery dipped by 16 percent and the phone’s temperature increased by 14 degrees. Suffice it to say, there isn’t a whole lot that separates the duo even in GPU-related metrics.

Battlegrounds Mobile India may have been removed from the Play Store and App Store, but official versions of the apk are still available for download. The title is also one of the most popular BR games in India and as such, runs quite well on both the phones I’m comparing today. The Vivo X80 can run the game at 90FPS provided the graphics are set to the Smooth preset, while the OnePlus 10T caps out at 60FPS. Do note that both phones can run the game at the Extreme frame rate preset even with the graphics set to HDR. For parity, I maxed out the graphics and FPS settings on both phones and ran the title for 30 minutes. Post my gaming session, I noticed that with the Vivo X80, the temperature gain was about 12 degrees while the battery drop was at 14 percent. On the OnePlus 10T, the gain in temperature was slightly higher at 14 degrees while the battery dropped by just 13 percent.

Going by the benchmarks, we can gather that both phones are on par with each other in the performance department. In fact, MediaTek and Qualcomm have done a commendable job with their flagship SoCs and while it’s difficult to outline a clear winner here, I can assure you that both the phones will tackle all your performance needs without so much as breaking a sweat. Do let us know in the comments below as to which of the two – the OnePlus 10T or the Vivo X80 – you’d rather buy and as always, stay tuned to our blog for more tech updates.