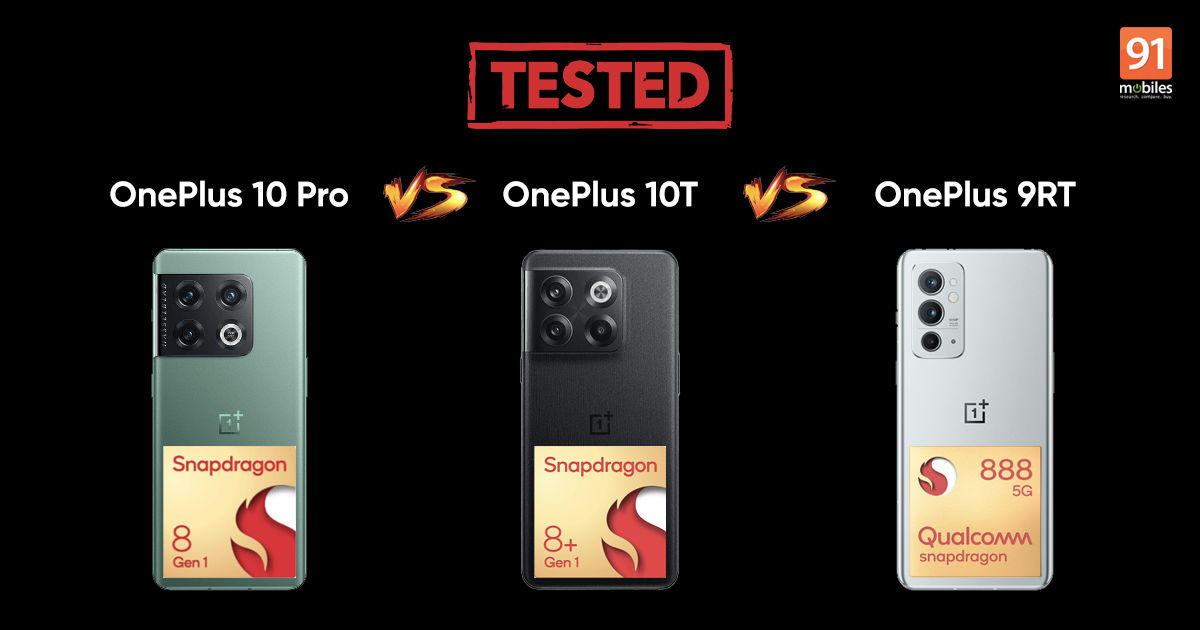 OnePlus has become a household name in India and over the years, the company has diversified its portfolio to accommodate affordable handsets too. Be that as it may, the brand has not let go of its high-performance roots and the company routinely launches turbocharged Android handsets in the flagship and the flagship killer space as well. Case in point, the recently launched OnePlus 10T, which, among other things, is backed by Qualcomm’s all-new, Snapdragon 8+ Gen 1 SoC. 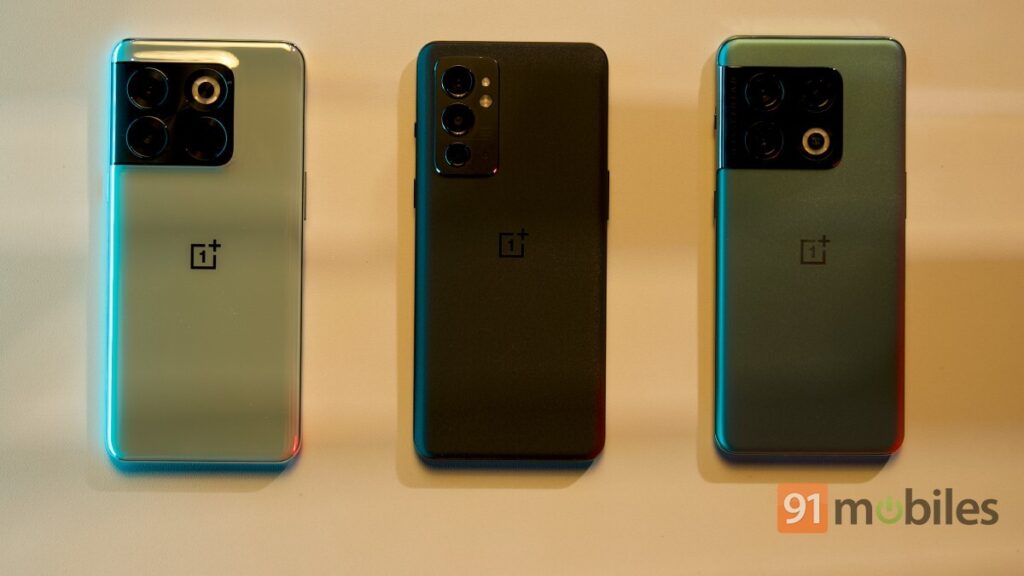 Understandably, there is a lot to be said about the new SoC’s performance capabilities and whether it offers better thermal efficiency compared to older Snapdragon chipsets. So, today, I’ll be pitting the OnePlus 10T against the Snapdragon 888-backed OnePlus 9RT (review) and the Snapdragon 8 Gen 1-backed OnePlus 10 Pro (review). Read on, to find out whether the latest 8+ Gen 1 platform is worth the hype or not.

Let’s kick things off by taking a look at some benchmark scores overturned by our contenders in various synthetic testing apps. Do note that I had enabled the high-performance mode on all three phones before running various benchmarks and games. In fact, if you’re looking to maximise the handset’s performance, then I’d recommend you enable the feature too, which can be accessed by going into the battery settings of your OnePlus smartphone. Understandably, the phones tend to get warmer with the feature enabled, however, yield significantly higher results in benchmarking applications too. 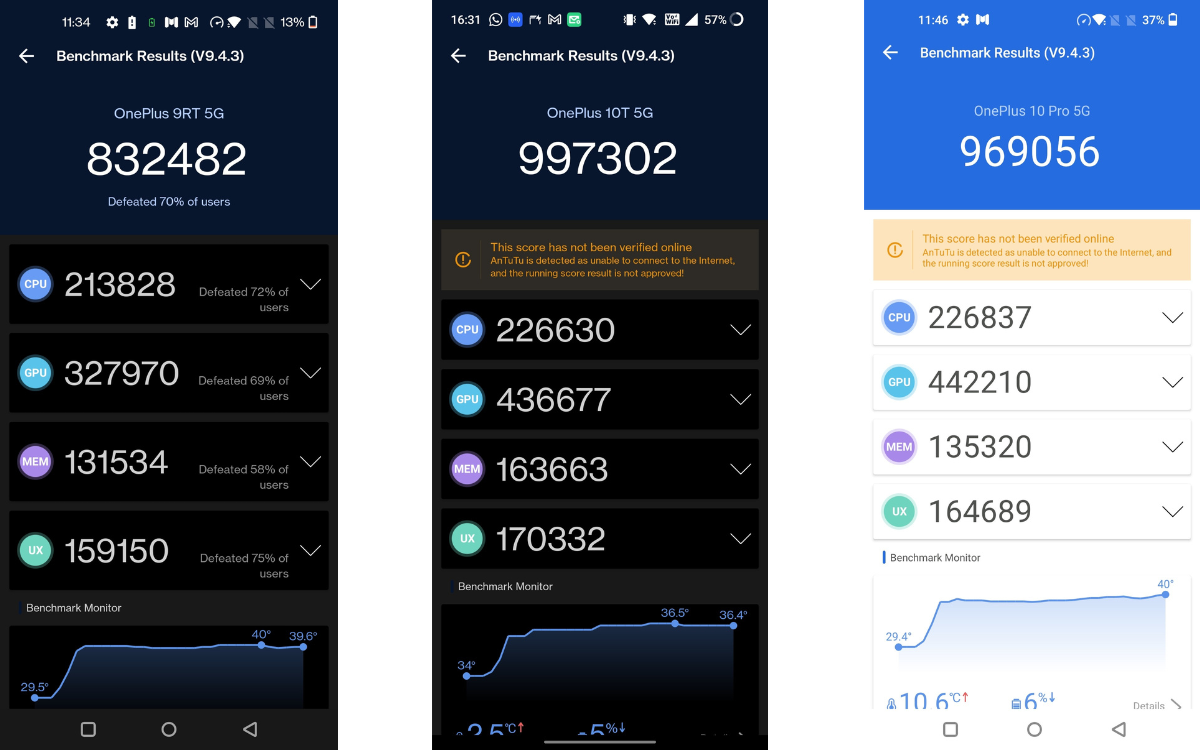 Case in point, Antutu benchmark wherein, the OnePlus 10T led the pack and secured 9,97,302 points. The OnePlus 10 Pro and the OnePlus 9RT came in second and third with 9,69,056 points and 8,32,482 points respectively. Interestingly, Qualcomm’s latest SoC, which, per the brand, offers 10 percent performance gains over the 8 Gen 1 platform, secured a compelling lead of around 30K points in the test run. The OnePlus 9RT’s Snapdragon 888 chipset, on the other hand, is starting to show its age – what a difference a matter of months makes, amirite? 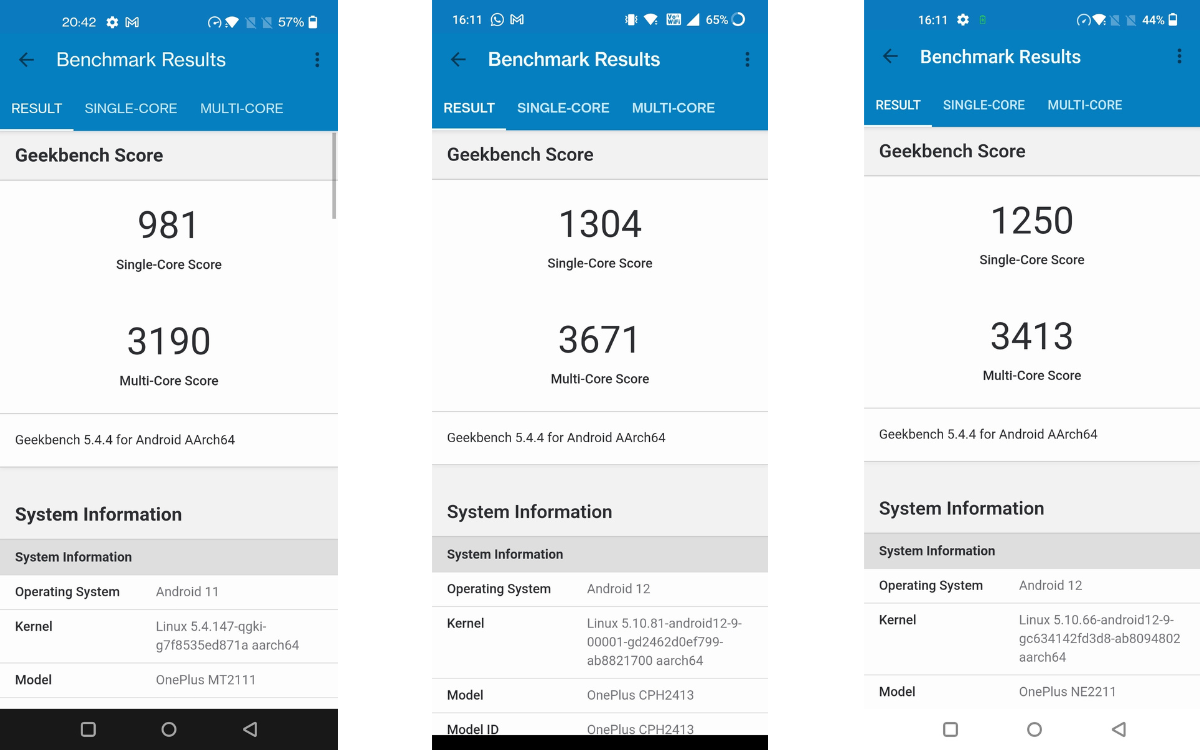 Moving on, the 10T’s onslaught continued in GeekBench, which gauges the performance of a smartphone’s CPU by simulating a variety of scenarios that leverage either one or all cores of the processor. The scores are then appropriately segregated into single-core and multi-core tabs. Here, the OnePlus 10T net 1,304 and 3,671 points respectively. The OnePlus 10 Pro was hot on the 10T’s heels with a single core and multi-core score of 1,250 and 3,413 points respectively. The 9RT, on the other hand, could be seen playing catch up with its pricier siblings and the device net 981 and 3,190 points in the respective test runs. 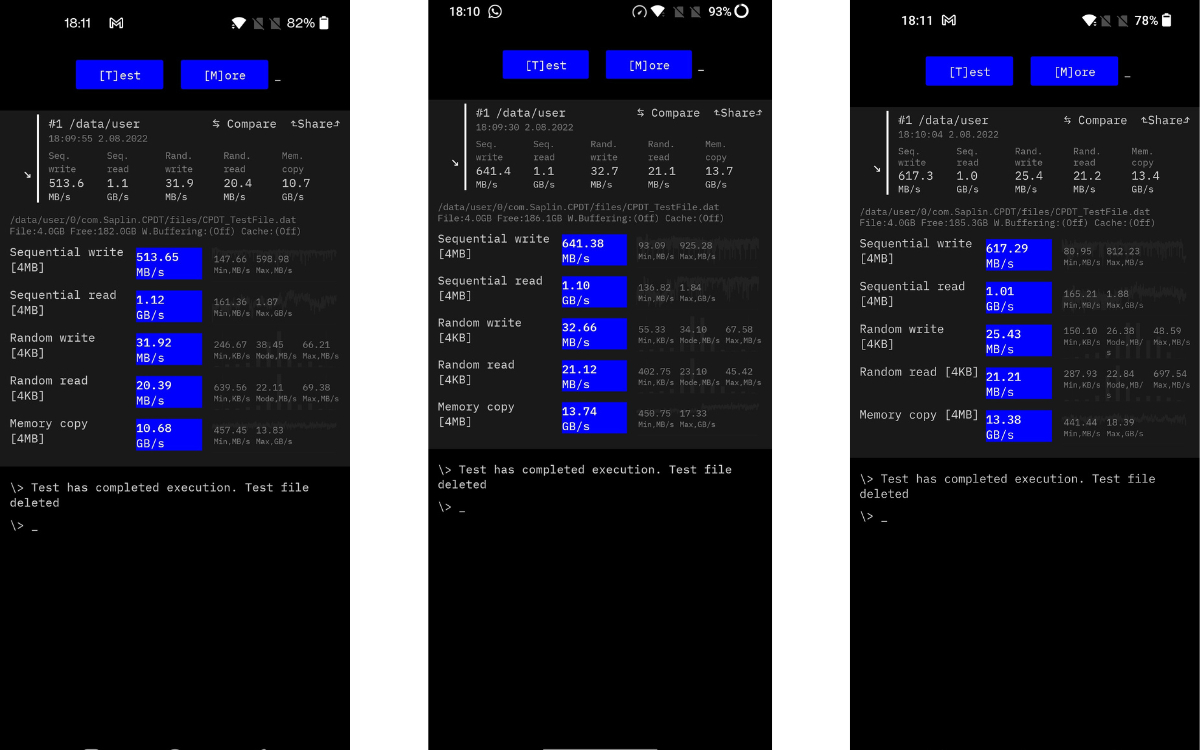 The icing on the cake is that all three phones ship with dual-lane UFS 3.1 storage and speedy LPDDR5 memory. Unsurprisingly, the device net similar sequential read and write speeds in the cross-platform disk test as well. You can refer to the screenshot attached above for more details but rest assured, our contenders’ storage doesn’t bottleneck their performance in the slightest.

Going by the benchmarks, it is safe to say that Qualcomm has actually bettered the performance of its latest chipset. But, it remains to be seen whether the company has fixed the throttling issues that cast a tall shadow on the 8 Gen 1 mobile platform. On that note, let’s see how the devices fare under a sustained workload. 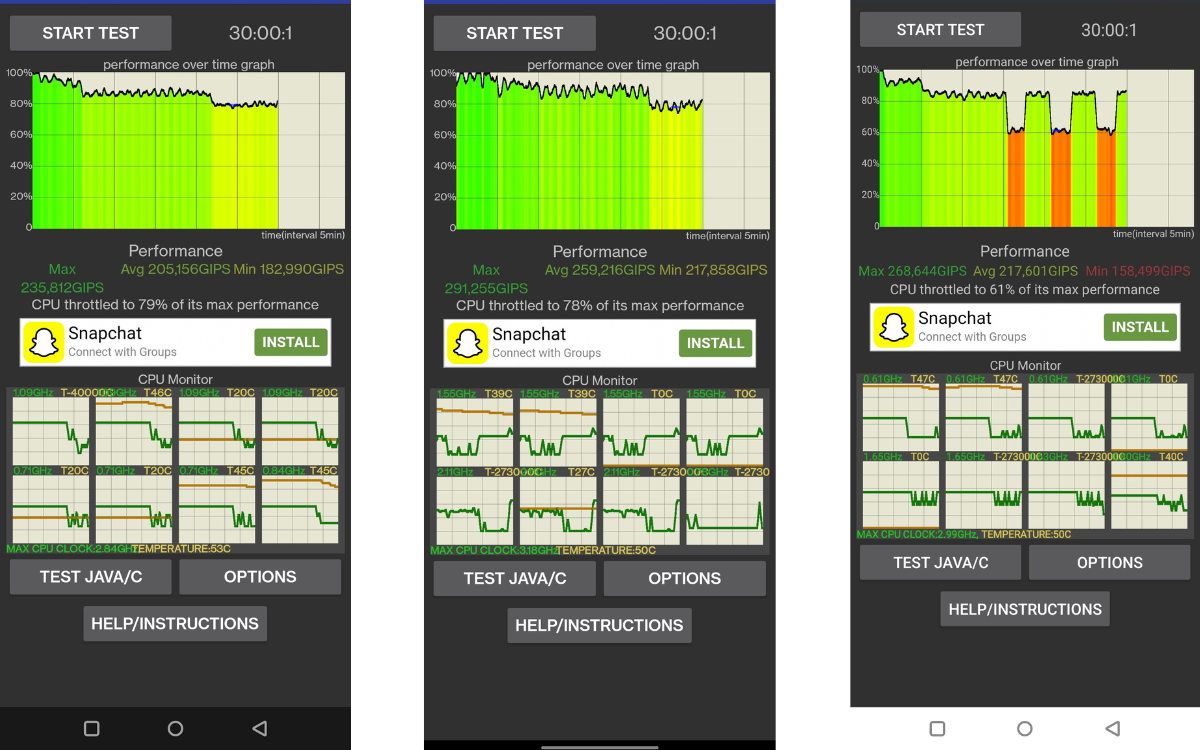 In a bid to tax the SoCs, I overloaded the phones with 20 threads in the CPU throttle test app. After 30 minutes, the OnePlus 9RT throttled to 79 percent of its maximum throughput, whereas the OnePlus 10T came in a close second and device throttled to 78 percent of its peak output. On the flip side, the OnePlus 10 Pro throttled by quite some margin and the handset dropped to 61 percent of its peak outturn. Making matters even more interesting, at its peak, the 10T’s 8+ Gen 1 chipset churned out the most instructions per cycle at 2,91,255 GIPS respectively. Furthermore, the device averaged the highest throughput during the test run at 2,59,216 GIPS as well. Clearly, Qualcomm has addressed the throttling issues plaguing the 8 Gen 1 platform with the newer SoC, which is great.

Lastly, let’s talk about gaming and here, all three phones run demanding games at similar graphics and FPS presets. In fact, you won’t notice a huge difference when running games like CoD Mobile on the trio. However, games like Genshin Impact can bring Qualcomm’s mightiest SoC to its knees too. To wit, I played Genshin Impact on the phones for around 15 minutes and in that time, all three devices started exhibiting significant frame drops.

You can refer to the screenshot attached above to get a glimpse of the graphics settings I used to test the game on the three phones. As is evident by the screenshots, I had deployed the ‘Medium’ preset with a couple of tweaks (FPS was capped at 60, and Motion Blur was disabled).

Here, the OnePlus 9RT impressed the most and the device averaged 56.9 FPS during the test run. That said, the OnePlus 10T’s gameplay exhibited lesser janks and big janks, meaning the in-game FPS didn’t drop erratically on the set. Instead, I usually noticed a smoother transition from a higher, to a lower FPS point and vice-versa. I should also point out that the device didn’t get remotely as warm as the 10 Pro, which, by the way, averaged the lowest FPS too.

Credit where credit’s due, Qualcomm’s Snapdragon 8+ Gen 1 chipset is a big step-up over its predecessor, the Snapdragon 8 Gen 1 platform. In fact, while the OnePlus 10 Pro is snappy enough, the smartphone’s chipset throttles quite a bit. What’s more, it’s evident that while the latest generation of CPUs offers better performance, buyers looking to buy a capable flagship killer for their gaming needs will still find plenty to like about older Snapdragon chipsets, including but not limited to the Snapdragon 888 and 870 processors. Do let us know in the comments below whether you’re lining up to buy the OnePlus 10T and stay tuned to our blog for more tech content.