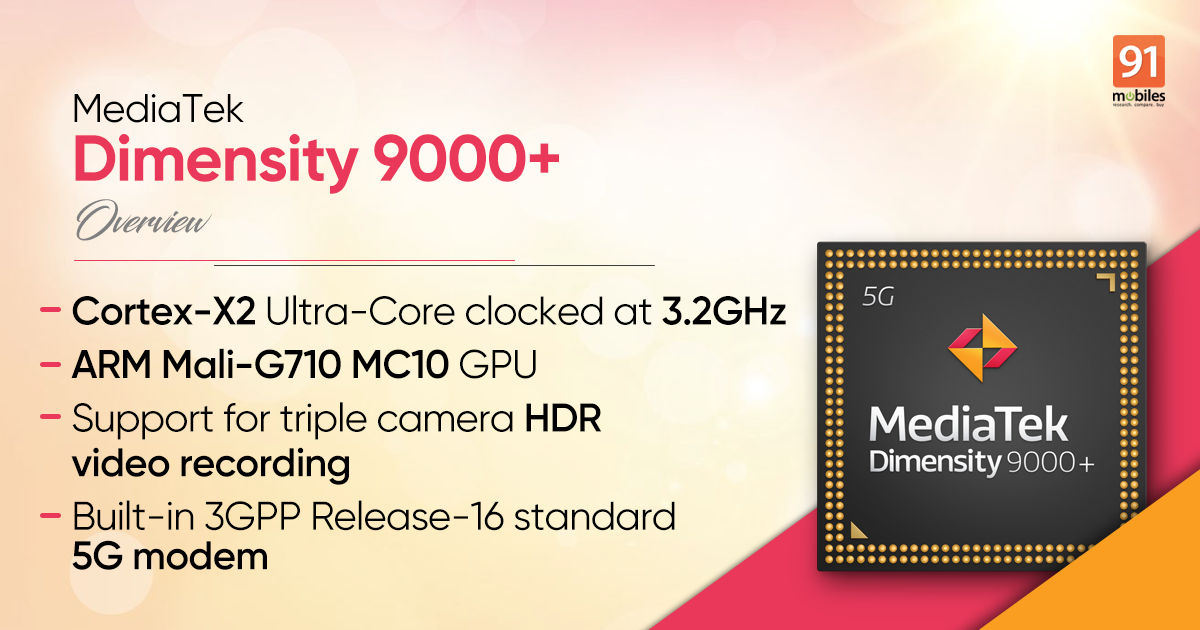 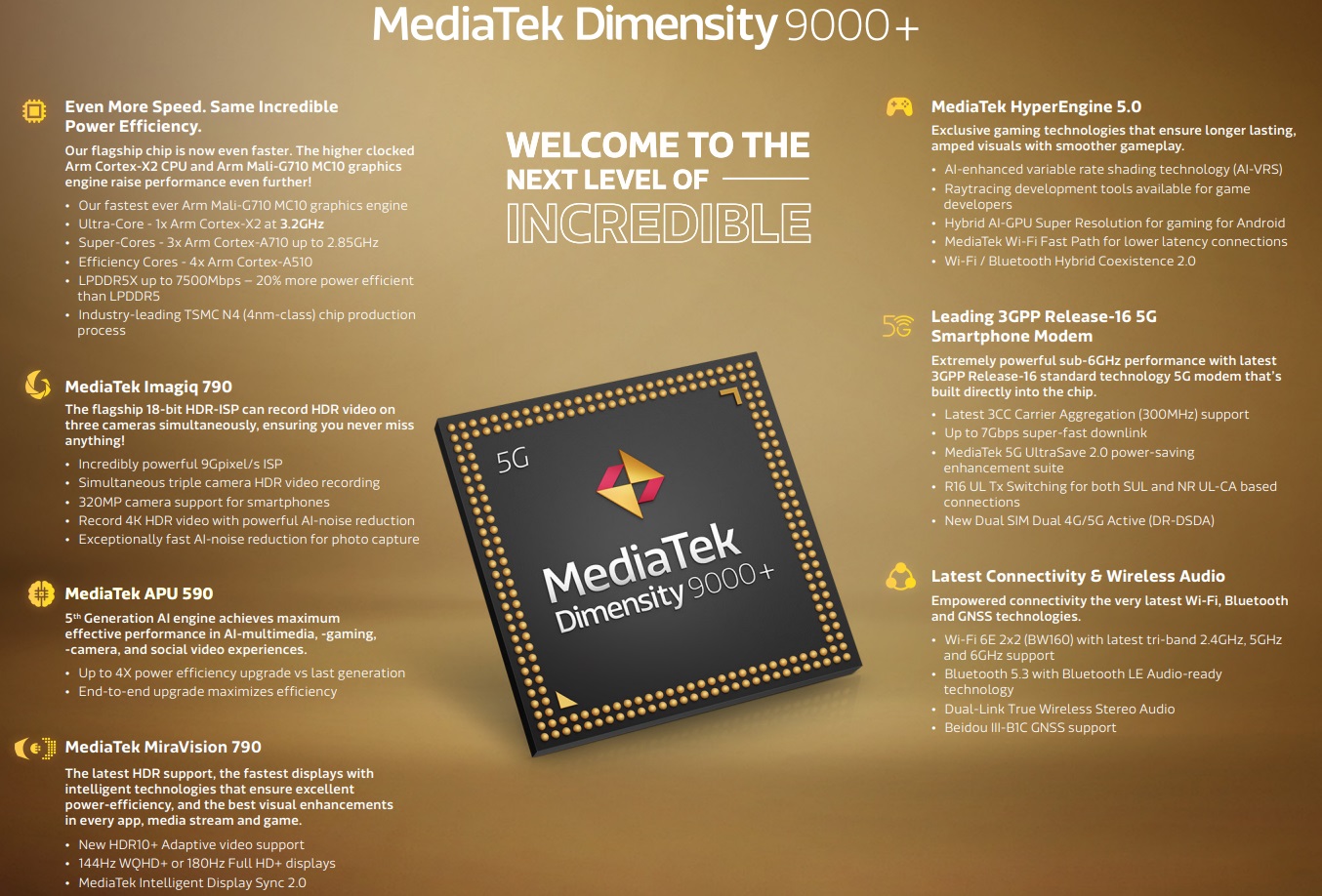 The new flagship chipset from MediaTek is the fastest one around along with offering the industry-leading TSMC N4 (4nm-class) process, once again. On MediaTek Dimensity 9000+, the ARM Cortex-X2 Ultra-Core is clocked at 3.2GHz, compared to the 3.05GHz clock speed in its predecessor. The remaining cores in the octa-core configuration are the same, i.e. three ARM Cortex-A710 Super-Cores running at up to 2.85GHz and four Efficiency Cores in the form of Cortex-A510. The best part is that the higher performance doesn’t come at the cost of power efficiency. Thanks to the support for LPDDR5X RAM with speeds of up to 7,500mbps, it’s 20 percent more power-efficient than LPDDR5.

Additionally, the new ARM Mali-G710 MC10 GPU is the fastest ever graphics processor, which brings us to…

A big leap in gaming

The all-new MediaTek Dimensity 9000+ comes with MediaTek’s 5th gen gaming technology, dubbed HyperEngine 5.0. The technology ensures non-stop gaming with more power efficiency and smoother gameplay. Additionally, you won’t be facing issues like connection drops, and gameplay jitters. Considering even a delay of a millisecond can cost the game for a player, these enhancements ensure that one gets a seamless gaming experience.

The processor also packs an AI-enhanced variable-rate shading technology (AI-VRS), which leverages APU to analyse and indentify the focal areas of the game being played to selectively reduce render quality in non-focal areas, thus improving power efficiency by 10 percent. Then there’s Hybrid AI-GPU super-resolution for providing realistic graphics by combining the GPU and AI processor together to do intelligent resolution upscaling and rendering enhancements. Lastly, there are a ton of networking capabilities too, including MediaTek Wi-Fi Fast Path for lower latency connections and Wi-Fi + Bluetooth Hybrid Coexistence 2.0, ensuring that gamers can lose the track of time while enjoying their favourite titles.

Upping the game in the imaging department 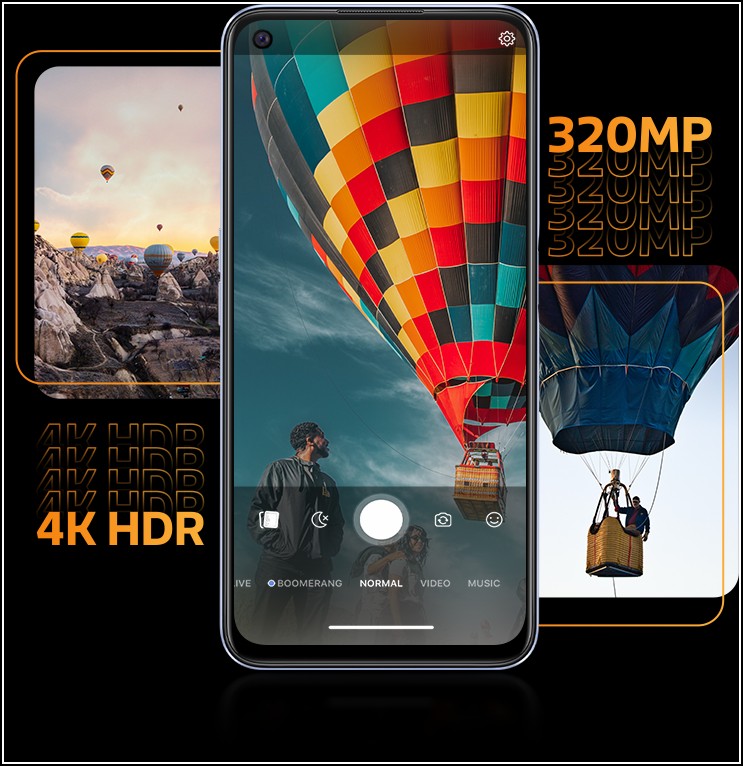 With the MediaTek Imagiq 790 on board, the flagship processor supports up to 320MP camera for smartphones. That’s not all, the chipset can power triple camera HDR video recording too, which means three cameras parallelly recording three exposures per frame. This will enable users to capture three fields of view (depending upon the camera array offered by the smartphone; for example: wide, standard, and zoom sensors), along with allowing livestream lovers to choose any camera while watching.

It can capture photos and record 4K HDR videos with powerful and fast AI-noise reduction. With support for powerful optics, the ISP takes care of the speed factor as well as it runs at 9Gpixels/s.

The Dimensity 9000+ also promises a powerful sub-6GHz connectivity performance that is combined with the latest technologies in a 3GPP Release-16 standard 5G modem built into the chip. It supports the latest 3CC Carrier Aggregation (300MHz), dual SIM dual 4G/5G active (DR-DSDA), and offers up to 7Gbps super-fast downlink. The processor also comes with MediaTek’s 5G UltraSave 2.0 which ensures power-saving for the devices latched on to the next-gen network.

… along with the latest connectivity features

The flagship offering from MediaTek features the recently announced Wi-Fi 6E with support for 2.4GHz, 5GHz, and 6GHz tri-band, along with the latest Bluetooth 5.3. These technologies make gaming, streaming media, and video conferencing, better than ever. The MediaTek Dimensity 9000+ chipset is also ideal for the latest Bluetooth earbuds that connect at lower latencies while supporting stereo audio. Its Wi-Fi 6E 2×2 with Bluetooth LE audio-ready technology promises true wireless and seamless connectivity.

Support for fast and intelligent displays

MediaTek Dimensity 9000+ also comes with support for the latest HDR10+ Adaptive display technology for smartphones. So, it will offer the fastest display with excellent power efficiency. Furthermore, the chip comes with MediaTek MiraVision 790 which adjusts the display for the best visual enhancements on every app. In terms of refresh rates and resolution, the chipset will support up to 144Hz WQHD+ or 180Hz Full HD+ displays and Wi-Fi displays up to 4K60 HDR10+.

Additionally, the MediaTek Intelligent Display Sync 2.0 technology will make it a smart display for it adjusts the refresh rate according to the frame rate of the game being played.

Thanks to the 5th gen AI processor in the form of MediaTek APU 590, the SoC maximum performance, including AI-multimedia, -gaming, -camera, and social media experiences. The processor can be used independently for various tasks or work as a co-processor such as AI-ISP, AI-GPU, and AI-Video providing faster performance as well as power-efficiency gains. Moreover, it offers up to 4X power efficiency upgrades over the last-gen APU.

In sum, the MediaTek Dimensity 9000+ elevates the performance to the next level while enhancing the battery efficiency as well. It comes across as a perfect chipset for the flagships that we’ll be seeing in the second half of this year. The brand has already stated that the smartphones with its latest and greatest offering will be commercially launched in Q3 2022. What’s more interesting is that the Dimensity 9000+ processor supports customisation by OEMs as it’s Dimensity 5G Open Resource Architecture ready, which means that we can see phonemakers unlock its capabilities even further.