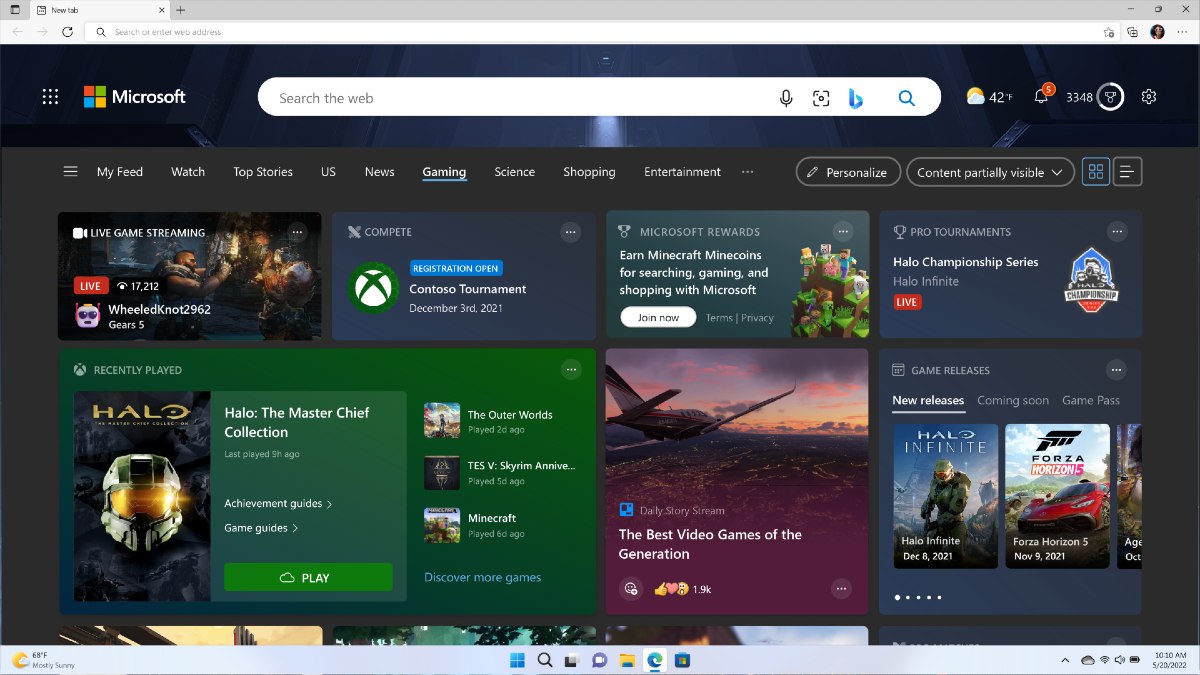 Microsoft has unveiled a plethora of new gaming features for Windows 11 and Microsoft Edge — with the natural aim to deliver an improved gaming experience — including windowed games optimisation, a new HDR calibration app, a new controller bar, new gaming home page, built-in Clarity Boost, and a new Efficiency mode. The new gaming improvements will be applicable to the desktop version of Microsoft Edge. Many of these are currently being tested under the Windows Insider programme.

Here’s how they break down. Optimisations for windowed games are expected to improve latency, and will add gaming features like Auto HDR and Variable Refresh Rate (VRR). A new HDR calibration app is being developed to improve the colour accuracy and consistency of HDR displays. Windows 11 will also be getting a PC Game Pass widget that will allow gamers to discover new games and easily jump back into recently played titles.

A controller bar is also being tested in the Windows Insider programme, that automatically pops up when a controller is connected to a Windows 11 system. It is designed to provide gamers easy access to their most recently played games and popular game launchers like the Xbox app without needing to use a mouse or keyboard.

“With Windows 11, they’re doing a lot of things to really delight PC players. There’s a whole new DirectX, so DirectX 12 Ultimate is going to give game developers even more tools to improve performance and reduce latency. Also last year, we introduced DirectStorage, which is this thing that makes games load a lot faster, ” said Ashley McKissick, corporate vice president of gaming experience & platforms at Xbox, on these upcoming Windows 11 updates.

Microsoft Edge is also evolving to meet modern gaming needs. Exclusive new gaming features will soon make their way to the desktop version of Microsoft Edge. The browser will be getting a new personalised gaming home page that will be filled with gaming-related content like game guides, live streams, game highlights, tournaments, and upcoming and newly released games. It will also sport Xbox Cloud Gaming integrations that will give gamers easy access to their cloud gaming library and recently played games.

With the built-in Clarity Boost, the desktop version of Microsoft Edge can deliver sharp and clear visuals while playing games. Gamers will also be able to quickly access popular free games like Microsoft Solitaire, Atari Asteroids, Microsoft Jewel, and Microsoft Edge’s exclusive Surf game through the new Game menu in Microsoft Edge. A new Efficiency mode will help boost gaming performance on Windows 10 and Windows 11 by automatically reducing the browser’s resource usage when a PC game is launched.

Windows 11 has been constantly receiving significant updates since its launch in October last year. Microsoft will be hoping to make gamers switch over to its latest operating system with these upcoming features. Furthermore, Microsoft Edge might become a unique offering for gamers with these updates, which might help it compete against other popular browsers like Google Chrome and Mozilla Firefox.