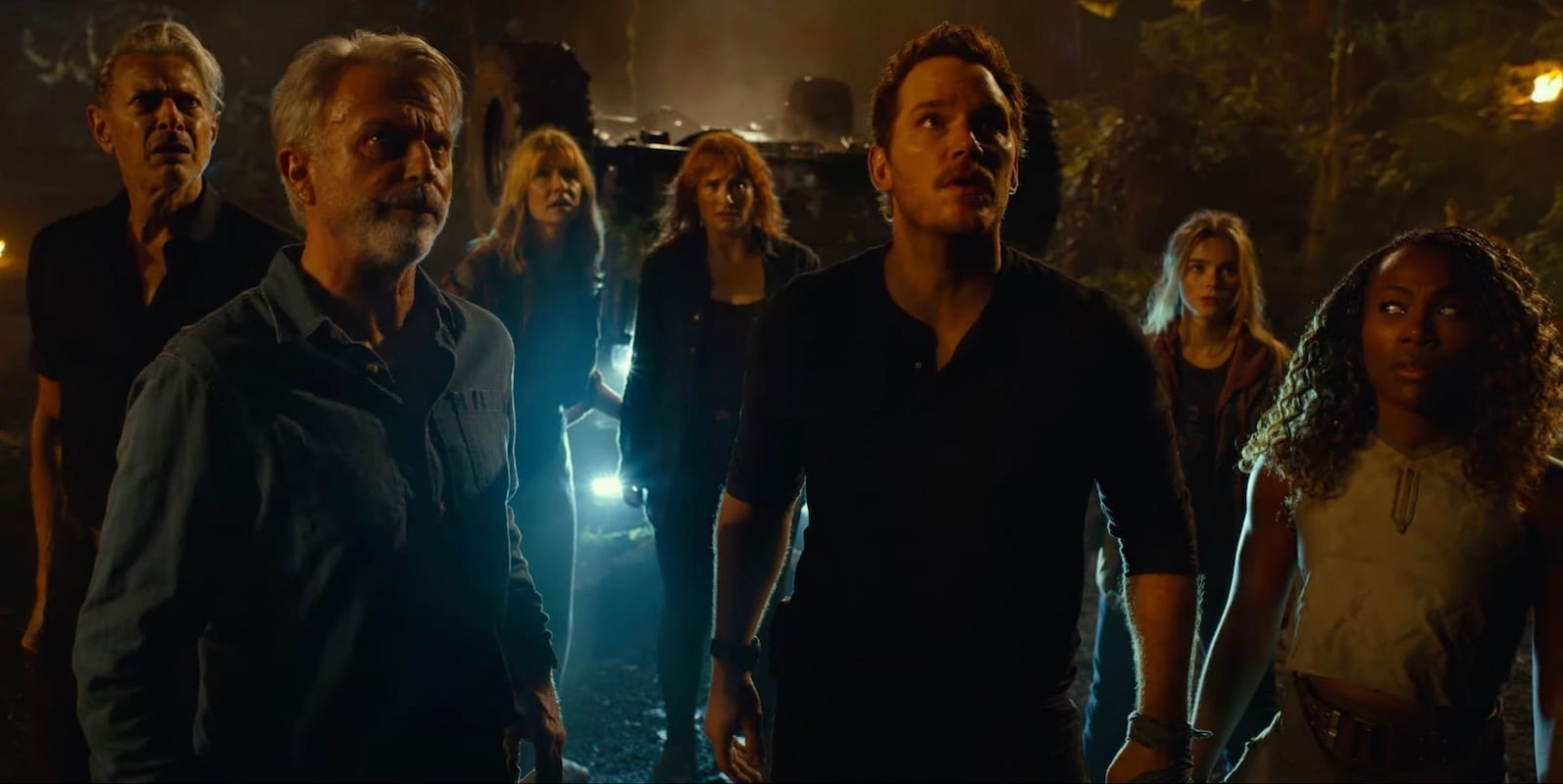 Jurassic World Dominion — out Friday in cinemas worldwide — is a bad movie. There’s no getting around it, so we might as well tackle that head on. It bafflingly discards the two major intriguing ideas that came out of its predecessor: human cloning, and dinosaurs are now amongst us. The former is erased in a retcon fashion, in an attempt to make Jurassic World Dominion about parenting and a mother’s love, rather than its ethical implications. Mind you, this isn’t a case of a writer-director going against what the previous guy had set up, as happened between Star Wars: The Last Jedi and Star Wars: The Rise of Skywalker. Jurassic World Dominion writer-director Colin Trevorrow is going against himself here, as he wrote the previous one too, Jurassic World: Fallen Kingdom.

But the much bigger crime that Jurassic World Dominion commits is in (largely) abandoning the potential of the latter. Rather than being set in our world and focusing on what it might be like for humans to co-exist with dinosaurs, something that was teased and seemingly promised by the two intervening shorts — the 10-minute film Battle at Big Rock, and the untitled five-minute “prologue” that’s no longer part of the movie — the bulk of Jurassic World Dominion once again takes place within an isolated dinosaur sanctuary that is run by a multinational corporation solely in it for the profit. What’s the point of calling it Jurassic World if your (terrible no-good) trilogy is going to end without showing us how the world and its many cultures are dealing with dinosaurs in different ways?

The stupidity of that writing decision — Emily Carmichael (Pacific Rim: Uprising) is Trevorrow’s co-screenwriter here — is made all the more evident by the fact that the best part of Jurassic World Dominion does take place in the real world. Malta, to be specific. It finds the protagonists venturing into a dinosaur black market that sells dino kebabs, and where chained raptors are made to fight each other for sport. It’s an immaculate setting.

There to find a kidnapped girl and velociraptor, they must then deal with a dinosaur smuggler and her trained pack of allosaurus. The narrow streets of Malta contribute to fascinating chase sequences, one of which features mimicry of memorable action beats from The Shining and The Bourne Ultimatum. The latter’s influence is much greater on Jurassic World Dominion, I would argue, with the pulsing Malta action gripping if not entirely coherent, thanks to the Bourne-style cinematography (from Jurassic World‘s John Schwartzman).

But for the most part, Jurassic World Dominion is incoherent, predictable, shabbily executed, too self-serious, and needlessly long (at 146 minutes with credits). Given Steven Spielberg remains the only director to deliver a good film in the franchise, Dominion had me pondering, “What makes a good Jurassic movie?” The answer for Trevorrow and Co. seems to be throwing new kinds of dinosaurs at humans. He has spoken about “saving” Giganotosaurus for the third film, as if he’s collecting Pokémon cards. Though to be fair, that’s what the dinosaurs have been reduced to at this point. They are like toys for the filmmakers, and minions for the villains. The magic that Jurassic Park conjured has long evaporated. Now, it’s about the sheer VFX spectacle you can throw at the audience.

Discarding the tonally-fit “prologue”, Jurassic World Dominion is now bookended by two expository and impersonal news segments. Imagine starting your $165-million-movie with a news broadcast. Post that, as it re-introduces us to the protagonists — old, new, and all-new — Jurassic World Dominion splits itself into two parallel narratives. Former raptor trainer and dinosaur herder Owen Grady (Chris Pratt) and former park manager and dinosaur rights activist Claire Dearing (Bryce Dallas Howard) set out to rescue their adoptive daughter Maisie Lockwood (Isabella Sermon) — the human clone who was the big surprise of Fallen Kingdom — after she is kidnapped by BioSyn, a genetics giant that has created a sanctuary for dinosaurs in Italy’s Dolomites range.

BioSyn CEO Dr. Lewis Dodgson (Campbell Scott, taking over from Cameron Thor 30 years later) is the new villain here, and he sees Maisie as the “world’s most valuable IP.” (They are making it too easy for us to draw parallels between Universal Pictures and its view of Jurassic World.) BioSyn is also behind genetically-modified locusts who are behind an impending famine, which pulls in the OG squad of Dr. Ellie Sattler (Laura Dern) and Dr. Alan Grant (Sam Neill) as they investigate BioSyn with help from Dr. Ian Malcolm (Jeff Goldblum). They need no introduction; they were part of Jurassic Park. All-new characters include DeWanda Wise as pilot-for-hire Kayla Watts whose path crosses with Owen and Claire, and Mamoudou Athie as BioSyn communications chief Ramsay Cole whose loyalties are questionable.

As you can tell, Jurassic World Dominion — just like Fantastic Beasts: The Secrets of Dumbledore — discards previously-important characters, or relegates them to the sidelines. Even Owen’s raptor friend Blue has been forgotten, and her baby Beta is used more as a MacGuffin than anything else. In a last-minute tug at the heart, Jurassic World Dominion tries to put a bow on the connection between Owen and Blue — but it feels misplaced as the movie is hardly about them. If the Jurassic World series itself can’t begin to care about its major faces, how will it get us to care?

The bigger issue ultimately is that the previous films — Jurassic World and Jurassic World: Fallen Kingdom — have sucked at developing the new human characters to make us care for them. And now that it’s too late to make amends, Trevorrow has simply opted to mine our nostalgia surrounding the original trio, one of whom made a cameo appearance last time around. But his understanding of these characters is frustratingly limited, as if they haven’t grown in the decades they’ve been away. Still, Dern exudes more natural charisma than Pratt has managed in three movies.

Pratt, in my opinion, has never been the right anchor for this franchise. I don’t think he has the presence to pull off the self-serious tough-guy role, no matter how much Hollywood keeps throwing it his way. He’s much better deployed in a jokey and devoid-of-self-awareness manner that James Gunn has done with Guardians of the Galaxy, which riffs on Pratt’s Parks & Recreation experience. And at some level, I think Trevorrow has come to recognise that. Which would explain while unlike the first two movies, he’s rarely left on his own here. On Jurassic World Dominion, Pratt shares the screen with Howard, Wise, Sermon, Neill, Omar Sy, and eventually, the entire gang.

Jurassic World Dominion Leaked on Torrents Ahead of Release in Cinemas

Pratt’s success as a bland action hero mirrors Trevorrow’s success as a bland blockbuster action director. Though he sat out the second movie as director — and may have the third as well, if he weren’t fired off Star Wars: The Rise of Skywalker — Trevorrow co-wrote the script for each entry in the Jurassic World trilogy. But despite showing little growth as a writer, and the ever-weakening critical review of his work, Universal Pictures has trusted him with its second-biggest cash cow. (Jurassic World films have made nearly $3 billion as yet.)

And though Jurassic World Dominion might be the third and final entry, I give Hollywood less than a decade before it decides to add to the canon once again, in one way or another. For now though, Trevorrow, Pratt and Co. leave us with a trilogy that we would like to forget ever existed. The first chapter tried to mimic the original in some ways, sending us back to the park but bigger. The second was an outright disaster, and I’m not referring to what the narrative was about. As for the third, I’ll let Dr. Ian Malcolm’s words from the film close us out: “Jurassic World? Not a fan.” I couldn’t agree more.