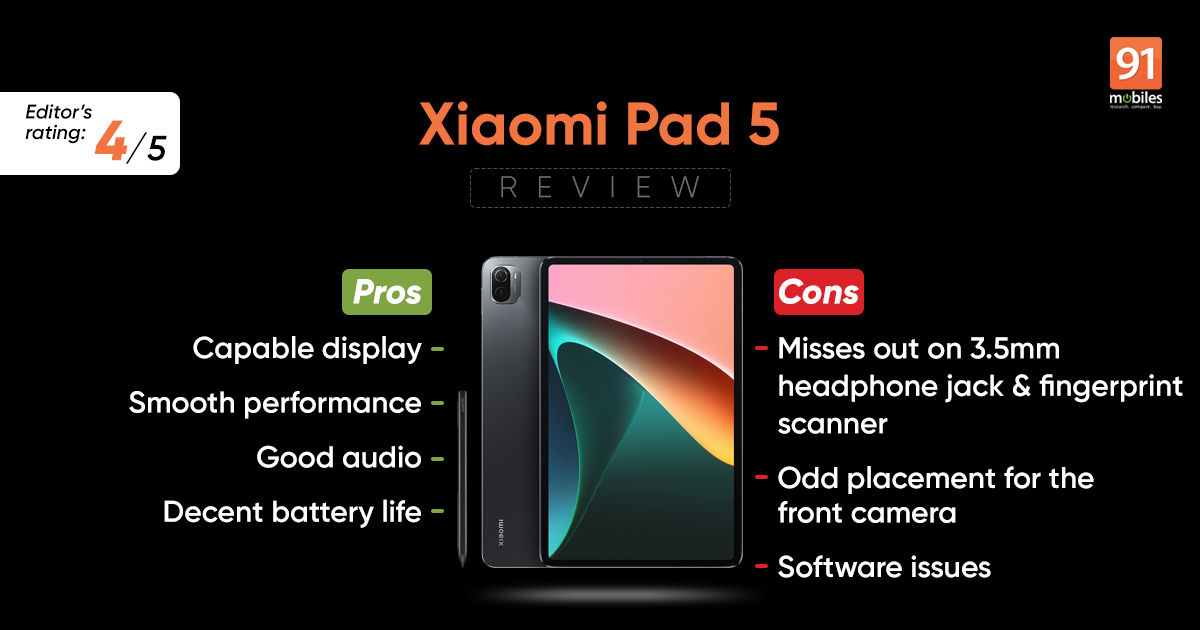 The tablet segment has been blowing hot and cold over the past few years, but things seem to be on the up and up lately. The last two years have seen a significant increase in adoption of digital technologies, and tablets seem to be riding the same wave, in some sense. Xiaomi is no stranger to tablets, but its latest attempt in this category comes after a long time. On the face of it, the new Xiaomi Pad 5 brings with it a compelling feature set and the brand’s signature value-oriented pricing… setting up an interesting battle with the venerable Apple iPad. Let’s see if it got the formula right.

The Xiaomi Pad 5 is a quintessential full-sized slate, with its 10.95-inch screen defining its dimensions. Just 6.9mm thick and tipping the scales at a little over 500g, the Pad 5 seems like a sturdy slate. The large screen with slim bezels dominates proceedings at the front, while the back has the camera module and Xiaomi branding. 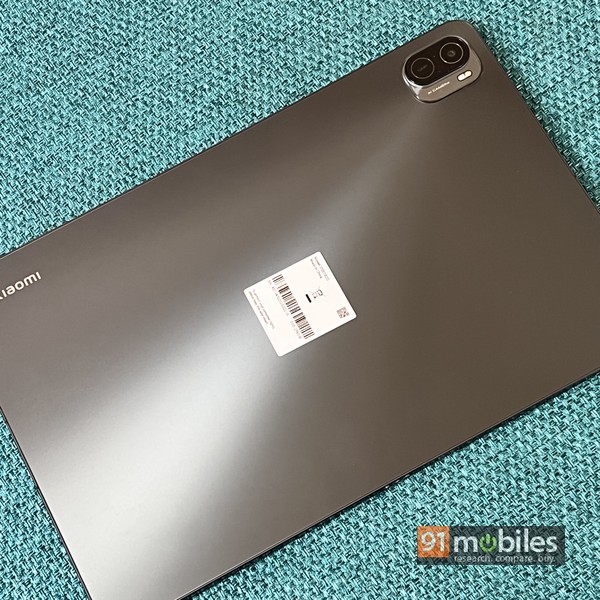 The camera module looks like it holds two snappers, but a closer gander reveals a singular lens and another circle next to it that mentions 13MP. A flash is placed alongside. When held in landscape mode, you’ll see the volume rocker placed on the top, along with a small strip where the optional stylus accessory attaches magnetically. The bottom has pogo pins for the keyboard cover, while speaker vents are visible on the left and right spines. In addition, the right side has the Type-C port while the left holds the power key. As I mentioned before, the build quality seems good… but right off the bat, a few small issues become evident. One, there’s no 3.5mm headset socket. Two, the placement of the front camera on the short edge of the device seems odd. For a full-sized slate, landscape is the ideal usage orientation, and the front camera’s position on the side seems less than ideal. Next, the device lacks a fingerprint scanner, though you do get face unlock. And lastly, while the frame of the slate is metal, its back is plastic… though it doesn’t really feel plasticky at all. None of these is a big deal-breaker, but still worth pointing out.

On the positive side, the display is a beauty. It’s only an LCD and doesn’t make use of AMOLED tech, but that apart, ticks most other boxes for a capable screen. It’s pretty high-res for one, offering 2.5K (1,600 x 2.560 pixels) resolution. Next, it offers up to 120Hz refresh rate… a feature that no other tablet can match in this price segment. Additionally, the display offers support not just for HDR10, but Dolby Vision as well… making the tablet great for streaming. The colours look vibrant, and the visuals quite crisp. As far as display customisation is concerned, you get the option to tweak colour temperature, choose between vivid, saturated and standard colour modes, toggle the dark mode on or off, and switch to 60Hz refresh rate for prolonging battery life. You can even enable the Adaptive colours feature that adjusts the colours to ambient light. 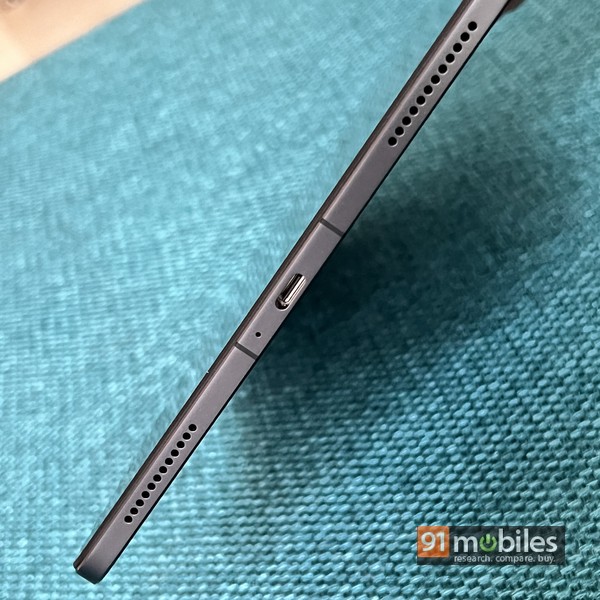 The entertainment use case is further helped by the loud and rich audio churned out by the quad speakers – two on each side. These speakers support Dolby Atmos, and what’s more, they can even map and adjust stereo sound automatically as you switch tablet orientation between horizontal and vertical. These are tiny details, but at the end of the day, they all add up and help make a difference to the overall experience.

The Xiaomi Pad 5 runs Android 11 with a special version of Xiaomi’s MIUI 13 customised for tablets. The UI is clean an intuitive, and there’s hardly any bloatware. Apart from Google’s usual set of apps, Xiaomi includes just the Netflix app and a few of its own. I do miss the Google Kids Space app that seems to be only available on tablets that runs stock Android, but the Xiaomi Pad 5 does have a few tricks of its own. MIUI’s signature second space feature is there in case you want to set up separate usage profiles, but more importantly, Xiaomi has added functionality to make better use of the larger screen. This comes in the form of a persistent dock that appears at the bottom of the screen. Also in the offing are features that allow you to run multiple apps together. From the recent apps screen, you can press and hold on thumbnails of supported apps to get options that allow you to run them in split screen or floating window mode. Icons can also be dragged out from an app ribbon of sorts to open them as floating windows, which can then be moved anywhere on the screen and resized as per requirements. Maximising a floating window needs you to press and hold on the bottom bar below it, and then drag it towards the bottom of the screen. On the other hand, you can minimise a floating wind by holding its corner and dragging it to the corner of the screen. After that, you can flick it outward to close it. It does involve a bit of a learning curve but it does work. All this is fine and dandy, there are some software aspects that need improvement. For example, trying to add additional Google accounts to the tablet proved to be problematic for me, with the window getting stuck on the “Getting info” screen a few times. At the time of publishing this review, the problem seemed to have sorted itself out though.

Xiaomi’s take on Android for a tablet is a good attempt, though one does need to keep in mind that in general, Apple’s ecosystem seems a tad better when it comes to apps optimised for tablets. That said, Android has its own advantages, and Google’s upcoming Android 12L, a build designed for foldables and tablets, is in the pipeline and hopefully, should come to the Xiaomi Pad 5 as well. 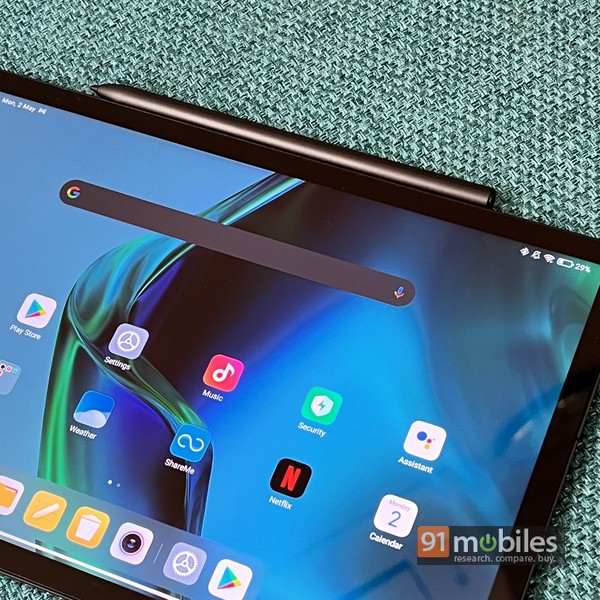 Xiaomi is also offering a stylus pen and a keyboard folio cover as optional accessories, in a bid to add functionality and increase the Pad 5’s appeal. The Xiaomi Smart Pen is an active stylus that connects with the tablet over Bluetooth and attaches magnetically with the slate on its top spine. Attaching it to the tablet also charges its built-in battery. The use cases are as expected – the pen can be used to scribble notes, draw, annotate etc. 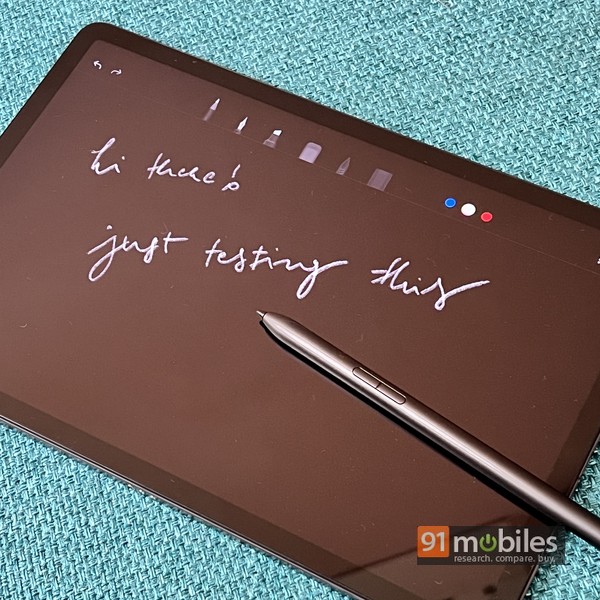 It sports two buttons, and by long-pressing the one closer to the tip and tapping the screen opens a quick note, while long-pressing the other one lets you capture a screenshot. Overall, it works reasonably well, though I noticed instances where it missed some strokes when I was scribbling on the screen. It’d be safe to say that the pen needs some improvement before it can match the smoothness offered by the Apple Pencil or Samsung S Pen. By the way, Xiaomi has even included a notes app that can help you make use of the pen for scribbling and doodling. 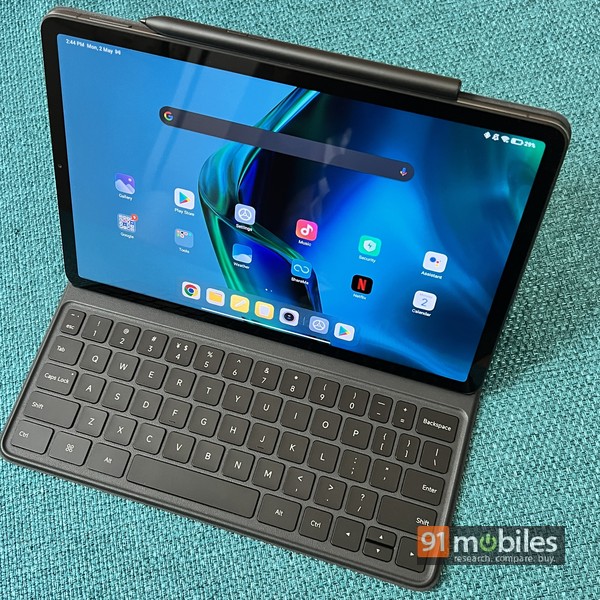 Far more useful perhaps, at least from my point of view, is the keyboard cover. Featuring a faux leather finish, the black folio cover feels well built and nice to the touch. Its back portion attaches to the rear of the slate, while the other half holds the keyboard that folds flat atop the tablet’s screen. The cover functions as a kickstand when the pogo pins below the tablet and the corresponding ones on the cover are aligned and connected. The keyboard itself is quite functional… it’s small and coming from a laptop, needs some getting used to. The keys offer ample travel, and once you do get the hang of it, you should be able to thump out text on it reasonably quickly. 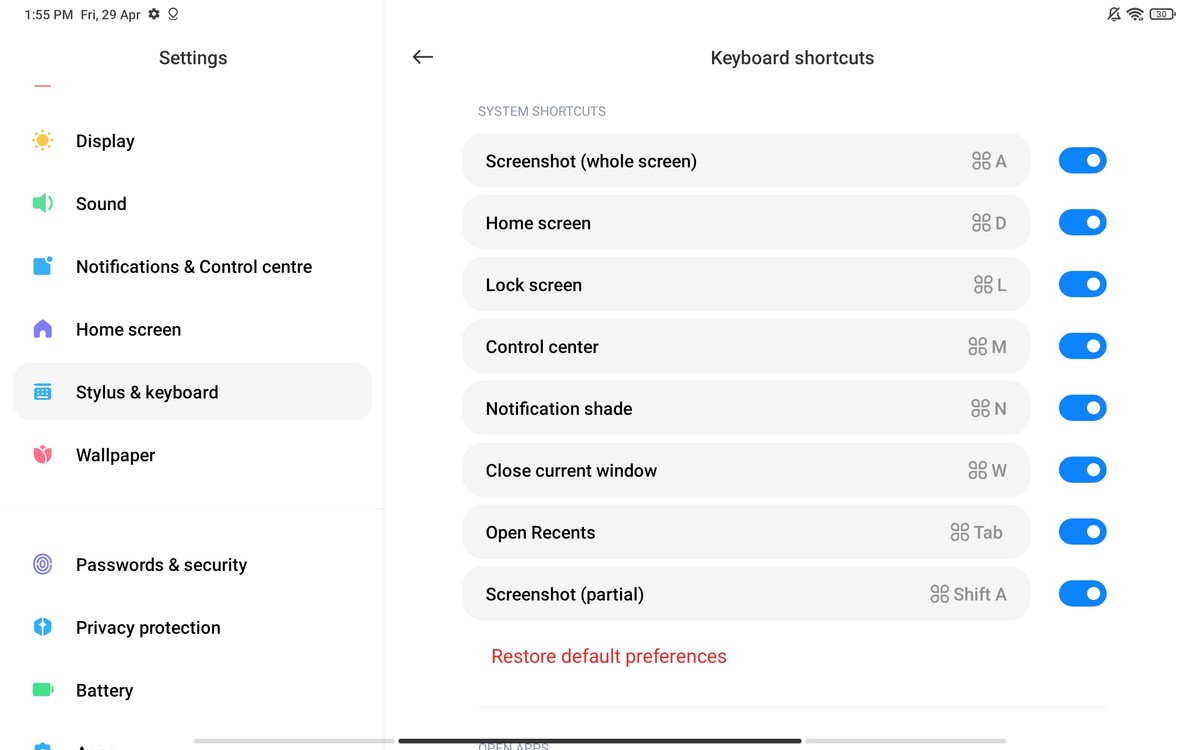 One of my favourite features is the shortcuts functionality Xiaomi has provided. You see, the bottom row on the keyboard has a function button which can be used in conjunction with other keys to perform certain tasks or launch apps of your choosing. The system shortcuts are listed in settings, but if you don’t like what you see, you can always disable it or choose a different key combination. For example, pressing the Fn + D combination jumps to the home screen, while Fn + N gives you the notification shade. You can go ahead and add shortcuts for launching your favourite apps too. For example, I assigned Fn + G to Gmail, giving me near-instant access to my email straight from the keyboard. 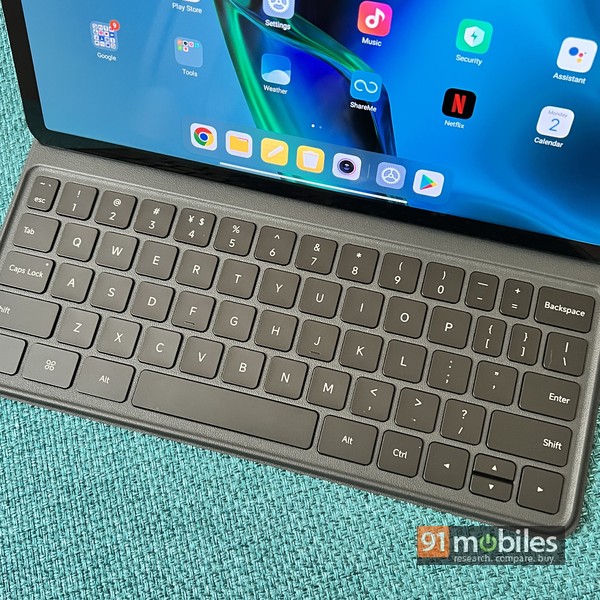 Do note that Xiaomi hasn’t announced the pricing of the Smart Pen and the keyboard cover accessories in India yet, so it remains to be seen how much of an extra outlay these would involve, over and above the cost of the tablet itself.

The Xiaomi Pad 5 utilises the services of Qualcomm’s Snapdragon 860 SoC to power the show. Mated to 6GB RAM and either 128 or 256GB of UFS 3.1 storage, the combination makes the Xiaomi Pad 5 the most powerful slate in its segment. The Snapdragon 860 chip was hitherto seen on the POCO X3 Pro, and to my knowledge, was the only phone in India that utilised this chipset. It’s a shame really, because this chip is quite powerful. It’s said to be just an overclocked version of the Snapdragon 855, and isn’t new by any means…. but the chip packs more than enough grunt for almost all the use cases seen by a tablet, and then some. Even intensive games like BGMI can play on the highest settings. As for the usual tasks like reading, browsing the web, multitasking by running a couple of apps together and streaming, the SD 860 enables super-smooth usage on the Xiaomi Pad 5.

Do note that Xiaomi has just introduced the Wi-Fi only model of the Pad 5 in India, and there’s no built-in GPS either. To get online whilst you’re out and about, you’d need to make use of a hotspot running on your phone. The 8,720mAh battery is a performer too, lasting more than a full day easily with continuous usage, and if your usage is intermittent, you should be able to go 3 days easily without needing to charge your tablet. Speaking of, the tablet actually supports 33W fast charging, but in the box, you’ll only find a 22.5W charger. The latter juices up the slate in a little over 2 hours, but if you already have a 33W or higher charger available or are able to get hold of one, you’d be able to charge the device more quickly.

Before I forget, the Xiaomi Pad 5 offers an 8MP camera at front, and a 13MP sensor at the rear. Now I don’t know about you, but wouldn’t use a tablet for photography. That said, the 13MP rear camera does come in handy for tasks like scanning documents, and in fact, has a special mode just for this. The front camera does the job for video calls. 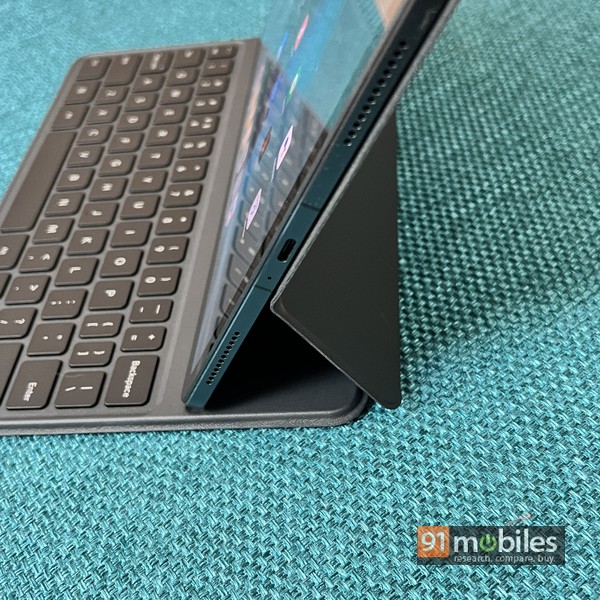 Xiaomi has priced the Pad 5 in India at Rs 26,999 and Rs 28,999 for the 128GB and 256GB storage variants respectively, and at that price, I think the tablet does deserve a big thumbs up. Of course, it’s not perfect and has its share of niggles, but the fact is that it’s a powerful slate that gets a lot of things right, and doesn’t cost the Earth. That said, I’m looking at the Xiaomi Pad 5 as a combination of the slate, the keyboard cover and the stylus, and pricing for the two accessories isn’t even available yet. Sure hope Xiaomi prices these aggressively in India so users get a chance to eke out the device’s full potential. Oh, and issue those software updates soon. The long and the short of it however, is that if you’re looking for a capable Android tablet and don’t want to spend a bomb, you can’t do better than the Xiaomi Pad 5.