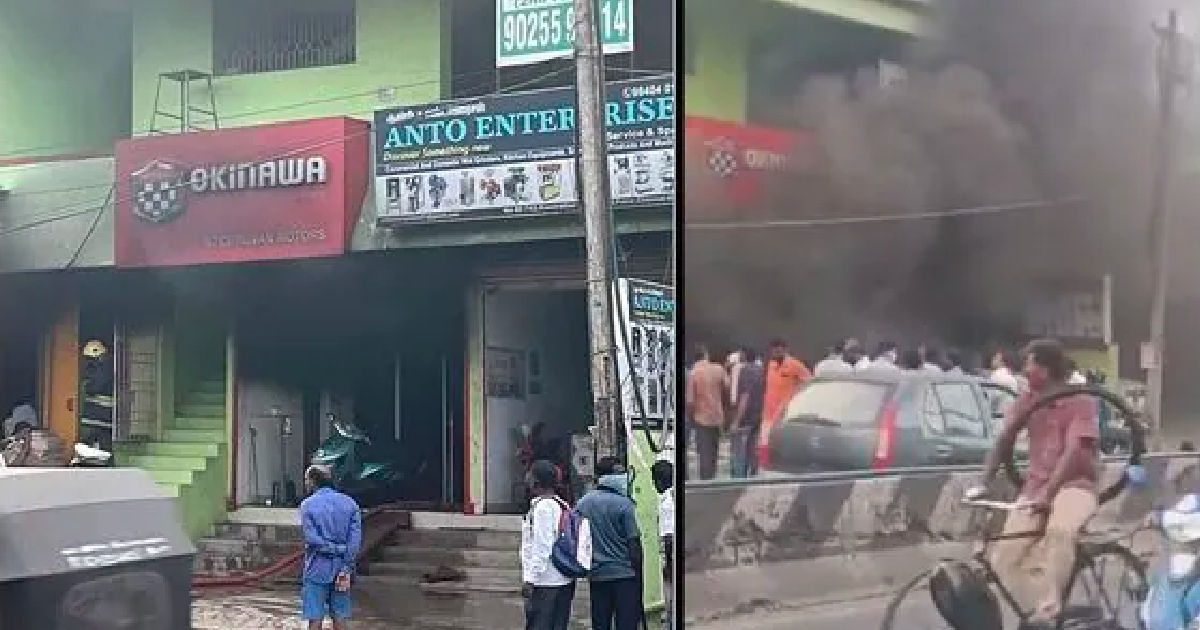 The company had issued a call back on April 16th for 3,215 units of the Okinawa Praise Pro e-scooter over concerns of battery-related fires. As many as three Okinawa e-scooters have caught fire since October 2021 and have ended up injuring two people. On March 25th, 2022, a father-daughter duo had reportedly died due to a blast in the battery of their brand-new Okinawa scooter while they were charging it at home.

No casualties have been reported and the fire was put out with the help of locals. It still remains to be seen to what extent the dealership has been damaged. However, going by the visuals from the accident site, there might hardly be anything left unburnt inside the outlet.

The video that surfaced soon after showed the dealership engulfed in thick black fumes. The devastation caused by the fire can be inferred from the amount of smoke exiting the commercial space. While the cause of the fire is officially yet to be investigated, EV fires in India are being blamed upon the inferior quality of battery packs, poor designs and lack of appropriate testing. No one has yet been reported to be injured in this incident.

Okinawa Autotech recently recalled its Praise Pro e-scooter in an effort to identify and rectify battery-related issues, free of cost for customers. A total of 3,215 units have been recalled in the process and Okinawa’s official statement on Saturday stated, “This is part of its comprehensive powerpack health checkup camps. The batteries will be checked for loose connectors or any damage and be repaired free of charge at any of the Okinawa authorised dealerships pan India.”

Sources suggest that the dealership fire took place just after Okinawa’s ‘Health-Check Up’ camps that were initiated on Saturday. This comes after scattered incidents of battery fires in e-scooters rose in frequency and multiple Okinawa e-scooters succumbed to a battery-related calamity. Two people have reportedly been injured in the process as well. Recently, a batch of 20 e-scooters from Jitendra EV caught fire in a transport container in Nashik.