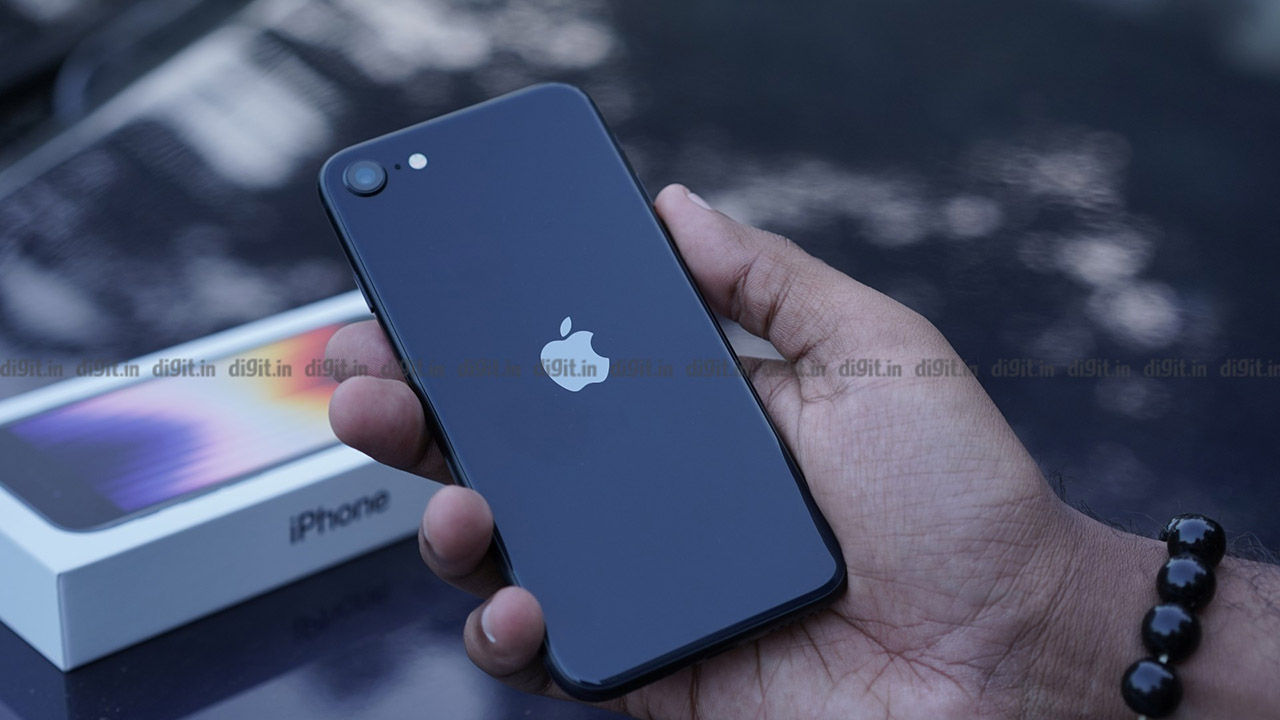 The Apple iPhone SE (2022) is the company’s latest affordable flagship. The phone not only replaces the previous iPhone SE in Apple’s line-up of devices but also takes on the might of some popular Android devices from the high-end segment. Interestingly, the iPhone SE (2022) does so by bringing with it some major internal upgrades — like the presence of the company’s latest chipset, the A15 Bionic SoC — but little change in what’s outside. The phone still follows the same design language found on the iPhone 8, making it look a little plain in front of its competitors.

In our time with it, we found the iPhone SE (2022) to be a very interesting device that’s full of promise, but also one that asks you to make some serious compromises. During the course of this review, we’ll take a look at what works for the iPhone SE (2022), and also what doesn’t, in order to give you an idea if this phone is worth your money.

Let’s start with what’s arguably the most boring bit about the iPhone SE (2022) — its design. As we mentioned above, the phone offers the same design language that we first saw on the iPhone 8. It’s compact, it’s lightweight and it can slide in and out of your pocket without much fuss. But as a phone launched in 2022, it offers greater peace of mind over its predecessors as it uses a toughened glass — the same as the one found on the back of the iPhone 13 devices launched towards the end of last year.

Apple’s approach to making the phone appears to be very minimalistic, with the back panel only featuring the company’s logo and a single-lens camera enclosure along with a flash. And because it’s Apple’s take on a dated design language, we have chunky bezels on the front and also a mechanical home button that also hides the company’s TouchID tech underneath.

But to the company’s credit, it has machined the iPhone SE (2022) for great ergonomics. The device with its compact form factor, curved edges and extremely lightweight frame — 144 grams —  feels great in the hand, thereby enhancing the experience of using the iPhone SE (2022). 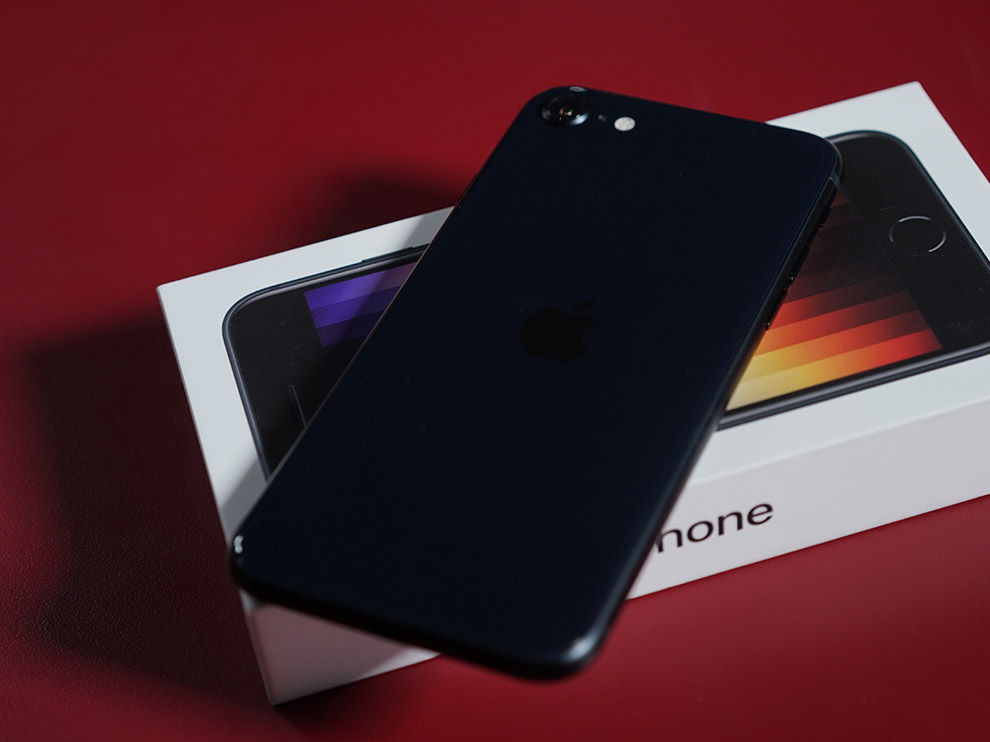 The primary reason why Apple’s managed to keep the phone lightweight and manageable is that the iPhone SE (2022) flaunts a rather compact, 4.7-inch IPS LCD panel. However, that’s exactly the last good thing about this display. For a high-end segment phone launched in 2022, not only is this panel too small, but it also doesn’t cut it in terms of quality that you’d come to expect from a phone from the segment.

It’s a panel that runs at a static resolution of 1334×750 pixels and is capable of churning out visuals at a pixel density of 326ppi. This ensures text, videos and images look sharp enough on the device, but in most cases not as sharp enough as a competing phone sitting next to the iPhone SE (2022). It’s also not a fast refresh rate panel and runs at 60Hz. Again, this may not be a big deal if you’re moving to the iPhone SE (2022) from a previous generation iPhone. However, there will be some disappointment waiting for you if you’re moving from a high-end Android smartphone or if you’re comparing the device to any other Android phone available in the same price bracket.

The display on the phone in our tests managed to hit a peak typical brightness of 472 nits. While this does not make it the brightest in the segment, we found it to be plenty bright for most use case scenarios. When not using the phone under direct sunlight, we found it to output vibrant and punchy visuals. The display is also well-calibrated and offers good colour accuracy levels as well. This honestly, wasn’t much of a surprise as Apple has a history of making phones with very well-calibrated panels. 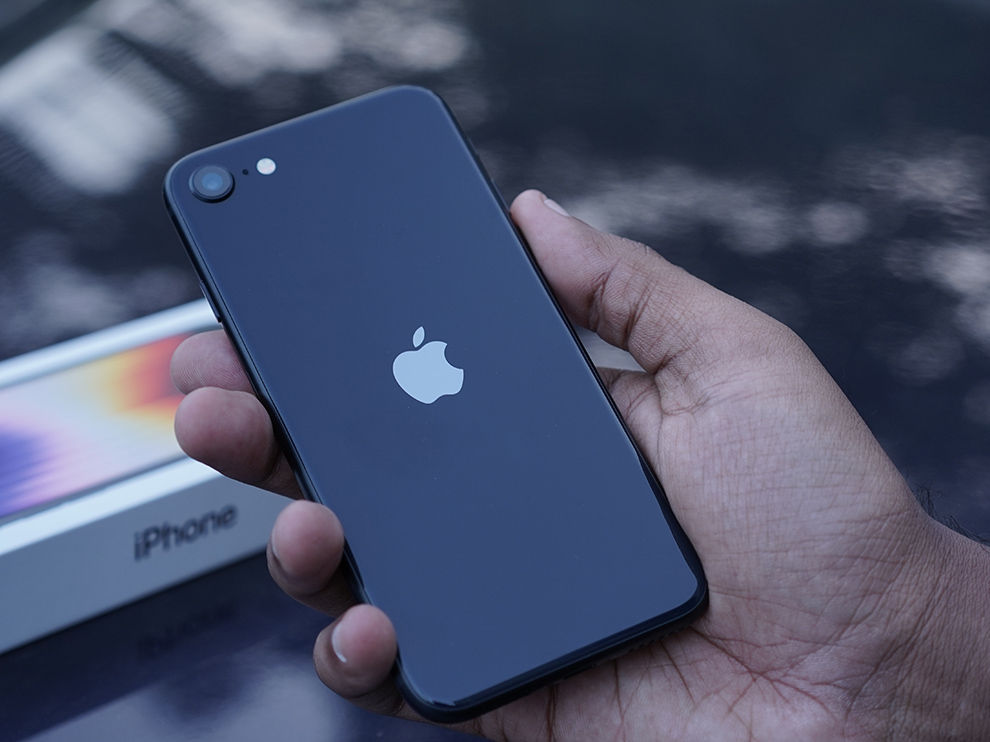 The iPhone SE (2022) also offers a lot when it comes to performance. This is because the device uses the same powerful chipset found on the iPhone 13. As a device that gets Apple’s new A15 Bionic SoC, we also get some serious upgrades with the iPhone SE (2022) over its predecessor, and more importantly, its biggest competitor, Qualcomm Snapdragon 8 Gen 1 SoC.

As such, the performance on the device is in some cases even better than what you get on some flagship Android phones. In benchmarks as well, the performance was in line with what we’ve seen on the iPhone 13 and iPhone 13 Pro. Gaming performance too, was generally pretty good, with games running like a charm on the device. We ran Call of Duty Mobile and Asphalt 9 Legends on the phone, and with Gamebench powering in the background only to realise both the games ran without any hitches on the phone. The same was the case for other GPU benchmarks such as GFXBench and 3D Mark WildLife. The two benchmarks utilised the powerful performance offered by the GPU of the iPhone SE (2022).

Our performance testing also saw us examine the battery performance of the iPhone SE (2022). Here the results were as expected, with the device proving to be one of the better performing devices in the department in the segment. In our time with it, we managed to get over a day’s work on moderate usage. It also managed to run for about 640 minutes on a single charge in our battery loop test. This good battery performance was the result of mainly two factors. The first is the well-optimized chipset that the A15 Bionic SoC is, and the second is the small-sized display that it’s tasked to handle.

The iPhone SE (2022) also gets support for 20W fast wired charging, which helps it go from 0-50 per cent around 30 minutes. However, a full charge took us around 80 minutes. Considering the size of the battery at hand, it’s honestly not a bad return. 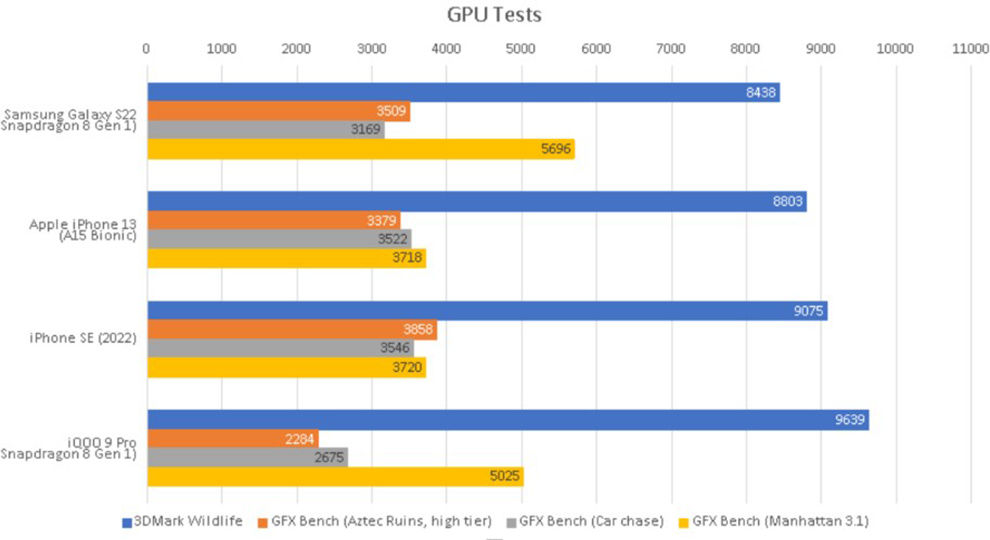 So the rear camera is actually not an upgrade in terms of hardware over what we’ve seen on the previous generation iPhone SE. However, because the iPhone SE (2022) is now powered by the A15 Bionic SoC, the new affordable iPhone gets access to some neat computational photography tricks. Yes, you don’t obviously get all the fancy features available to the iPhone 13 series of phones — for example, the Night Mode is missing. Yet, you do get enough to click some really nice pictures. 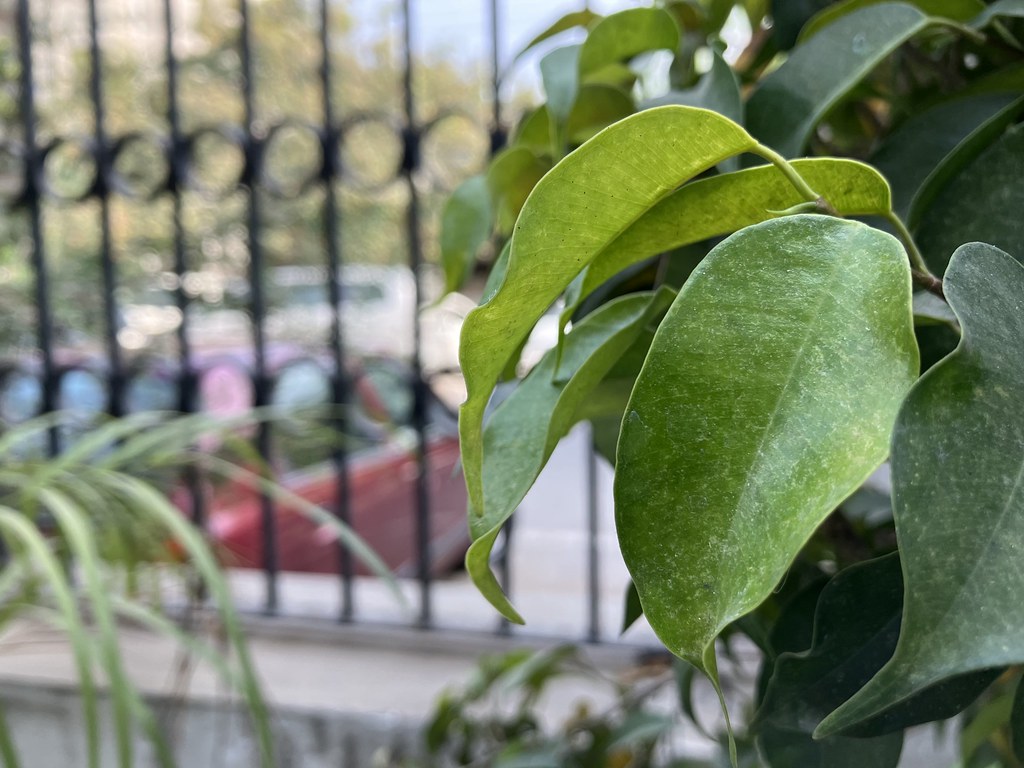 As a result, pictures clicked using the iPhone SE (2022) come out with a good amount of detail, however, they don’t look as rich and punchy as the ones clicked using the other current-gen iPhones — or for the matter, even the ones from some of the competing Android phones in the budget segment. Again, because we have the A15 Bionic in play, the shutter response is good and the phone’s camera app throws up almost no observable lag to disrupt the picture clicking experience.

Low light performance, however, is a different story altogether, with the rear lens leaving a little to be desired from its performance. Its frailities are exposed when fed with an inadequate amount of light, as it fails to capture enough amount of detail. The only saving grace here is that because of Apple’s strong performance in the computational photography department, the iPhone SE manages to handle noise well in these low-light images. But as a package, overall the iPhone SE (2022) just works fine as a good point and shoot camera, despite its obvious failings in the low light department.

The selfie lens on the phone offers similar performance as it captures a good amount of detail and accurate colour tones. There’s no oversharpening of textures as well, thereby making it good for clicking selfies in well-lit situations. However, the low light performance of this lens as well is not always up to the mark. 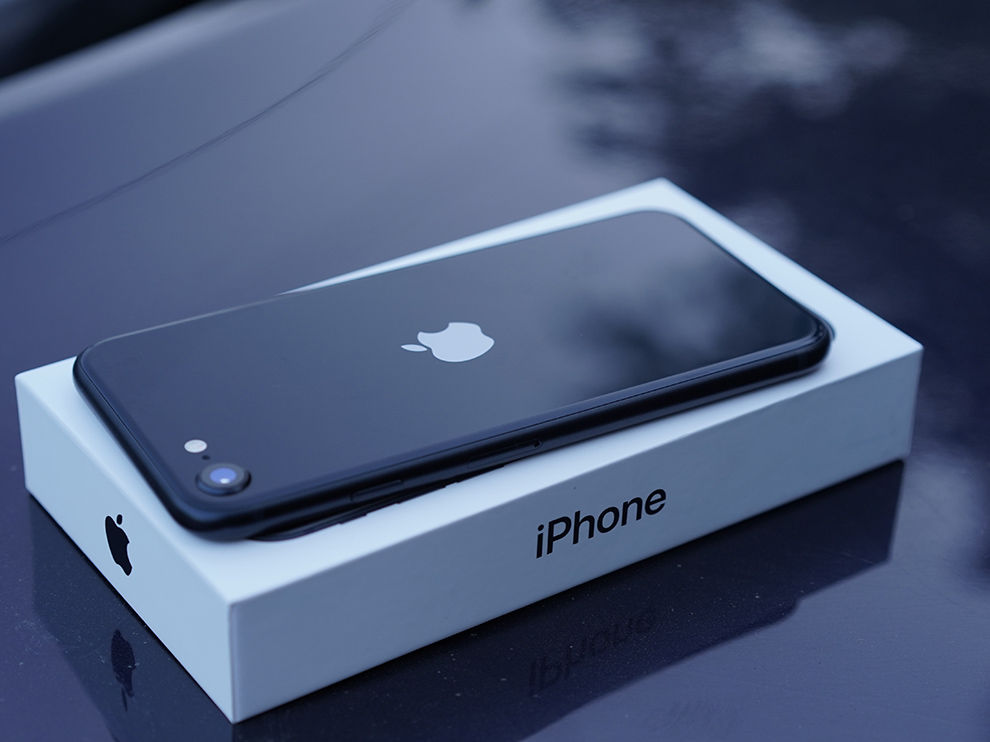 The iPhone SE (2022) offers a lot to like if you’re a fan of compact form factor smartphones. It is a phone that promises you good battery life, and also brings with it the promise of powerful performance for pretty much anything you do on the device. To top it off, it also offers a pretty good point-and-shoot camera experience with its single-lens camera set-up at the back. And the most important thing is it does all of this despite being the most affordable current-gen iPhone from the company.

However, it may still not be the phone for everyone. And the reasons are obvious. The lack of a bigger display, the outdated design, and average low-light camera performance are all reasons to ignore the iPhone SE (2022) in favour of something from the world of Android. But, that’s only if you are comfortable going down that path.

For anyone who wishes to remain within the Apple ecosystem, there really isn’t any other choice. Unless of course, you’re looking at the iPhone 11 as an option. It’s dated (only in name) and is not as future-proof because it is powered by an older generation chipset. Yet, it makes up for this by bringing more versatile cameras and a design and a display that’s more in line with the times.